"There’s so many pain points that EV owners have." 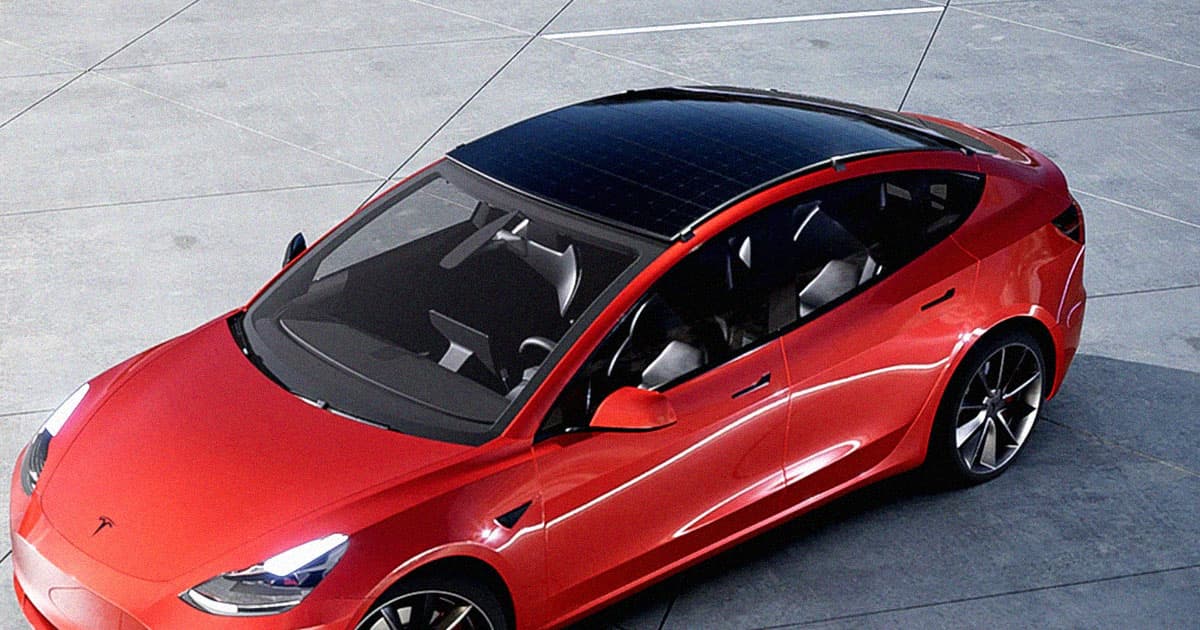 A startup called EV Solar Kits is working on a photovoltaic upgrade package for Tesla vehicles that it says will cost just $5,000 and add up to 60 miles of range per day.

"There’s so many pain points that EV owners have, whether it’s range anxiety or lifestyle aversion," cofounder Steele Wasik told Futurism. "There’s just so many variables when it comes to EVs. It’s kind of the Wild West right now. I wanted to see if I could take a swing at solving these problem with an aftermarket product."

Wasik — whose father and grandfather were both design engineers for Cadillac — says the kits can be installed on the roof of Tesla's Model 3 and Model Y vehicles, and that the company is also working on extendable trunk panels that will be compatible with any electric vehicle. The upgrades won't violate Tesla's warrantee, he said.

If that all sounds too good to be true, it's worth noting that the company has yet to install one of its kits in a single customer's car. But Wasik says the company has already rolled the tech out for beta test drivers in the Austin, TX area, though he declined to provide photo or video of the product in action, saying that the final design of the panels isn't yet finalized.

The venture's financial position is also open to interpretation. Wasik characterized its current funding status as "pre-seed," and said the company expects to launch a crowdfunding campaign soon. The project has generated significant buzz among EV enthusiasts, he said, and has collected an email list of several thousand potential buyers.

And in the concept's defense, it's true that onboard solar panels on electric cars could represent an intriguing puzzle piece in the still-fraught charging infrastructure for the vehicles. The concept of a car that passively generates power all day is a seductive one, and even if the kits fall far short of Wasik's anticipated 60 miles of extra range — especially, needless to say, in less sunny environments — the extra charge could still be a sustainable boost for green transportation.

"Most people buy an EV because they want to be green," Wasik said. "At the same time, electricity is coming from plant that burns fossil fuels. To find a way to make EVs what we want them to be, we’re excited about that."

Even Elon Musk, the mercurial CEO of Tesla, has sometimes publicly expressed interest in solar panels for the vehicles, though his enthusiasm has varied wildly depending on the context.

Back in 2016, for instance, he said that Tesla would "probably" offer a solar roof option for the company's Model 3, adding that the upgrade wouldn't be "super expensive" and even musing about a "retractable" solar system that sounded similar in spirit to EV Solar Kits' extendable panels.

Though that upgrade has yet to surface commercially, Musk has also promised that the company's hotly anticipated Cybertruck will be available with a solar power option. A Tesla patent application that surfaced earlier this year shows off a design for retractable solar panels on vehicle.

Musk may have later soured on the concept, though, with him telling controversial podcast host Joe Rogan last year that the Cybertruck's solar panels probably wouldn't provide enough power for daily use unless it wasn't driven often. In that interview, Musk told Rogan that a solar-powered van might actually make more sense because of the design.

"You possibly put the cover of the truck bed, put some solar cells in there, so you could just leave it out in the sun," Musk told Rogan during the podcast at the time. "If you could do ten miles a day you’d be lucky."

All told, Musk's ambiguous position toward the tech raises the question of whether EV Solar Kits is positioning itself to be acquired by the automaker (both Tesla and Musk declined to answer questions for this story.)

But Wasik demurred on that possibility, joking only that he'd "want to meet Elon if that happened."

"Right now," he said, "we’re worried about getting the best product to consumers."

Overall, he says, he has faith in the tight-knit community of EV enthusiasts, who he believes will only respond to a product that delivers on a technical level.

"We did our best to be the educational solar company that really walked people through exactly how this works," Wasik says. "It might not have been as sexy a pitch, but that’s who we wanted to be."

More on eco-friendly transport: Cargo Ship Will Get Dragged Through Ocean by Giant Kite

Read This Next
Where's Musko
7 Theories About Why Elon Musk Has Disappeared
tesla recall
Tesla Accused of Shutting Off Autopilot Moments Before Impact
Fiery Furnaces
Firefighters Struggle as Junkyard Tesla Bursts Into Flames Weeks After Crash
New Low Score
Tesla Reportedly Giving Full Self-Driving Beta to Basically Anybody Now
Stonk Broke
Twitter Bots Love Tesla. Elon Musk Is Pledging to Destroy Them
More on Advanced Transport
Robotaxi to Nowhere
Yesterday on the byte
Group of Robotaxis All Shut Down at Same Moment, Stopping Traffic for Hours
Here for the ride
Wednesday on the byte
GM's Robotaxis Are Now Collecting Fares with No Safety Driver
Sign Me Up
Wednesday on the byte
Airline Announces Plans to Add Spacious Bunk Beds to Economy Class
READ MORE STORIES ABOUT / Advanced Transport
Keep up.
Subscribe to our daily newsletter to keep in touch with the subjects shaping our future.
+Social+Newsletter
TopicsAbout UsContact Us
Copyright ©, Camden Media Inc All Rights Reserved. See our User Agreement, Privacy Policy and Data Use Policy. The material on this site may not be reproduced, distributed, transmitted, cached or otherwise used, except with prior written permission of Futurism. Fonts by Typekit and Monotype.