Tesla Is Absolutely Spraying Out Cars

Its California plant is now the most productive auto plant in North America. 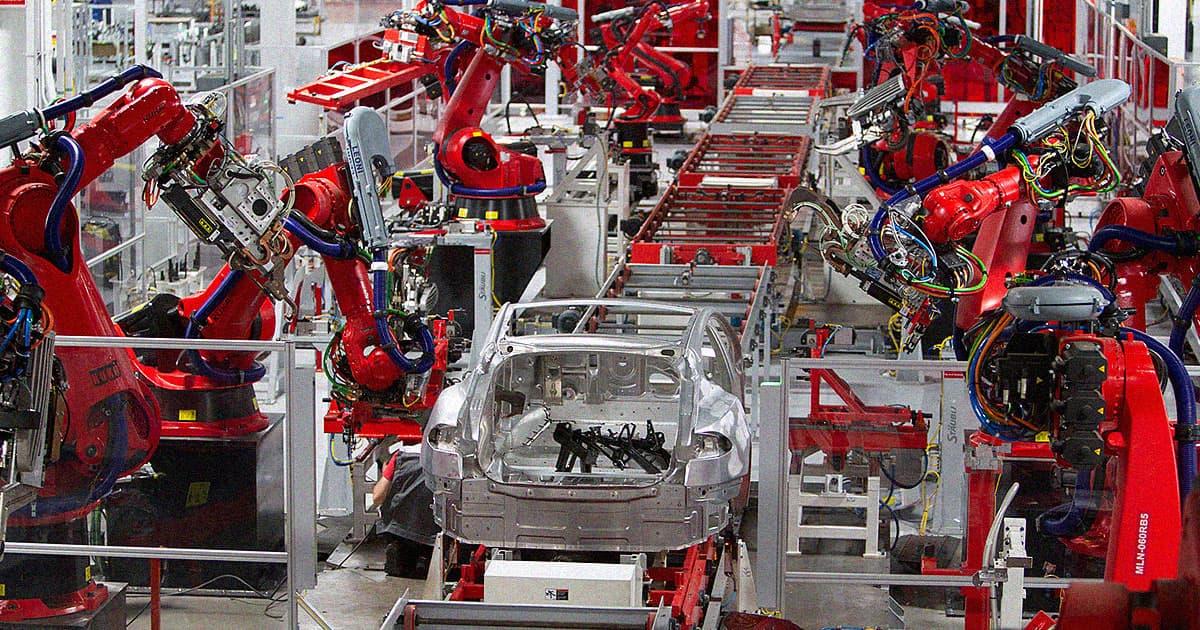 Tesla had a record-breaking year in 2021, producing 83 percent more cars compared to 2020 and coming tantalizingly close to the one million cars in a year milestone by producing 936,172 cars. Its plant in Shanghai triple its output over the same period.

In fact, the Elon Musk-led company's original factory in Fremont, California has become the most productive auto plant on the continent, Bloomberg reports — an astonishing rise that goes to show the company's valuation isn't based on speculation alone.

And those numbers are likely to keep rising with the company opening even bigger plants in Berlin, Germany, and Austin, Texas later this year, with more locations for future sites already being selected.

In short, consumers are going crazy for Tesla's coveted electric vehicles, and the company is finally able to — at least sort of — keep up.

Tesla however is still dwarfed by other automakers in the country, coming in at number ten in terms of overall production, according to Bloomberg.

The company's progress is unmistakable, however. Musk has often lamented about his hardships, including the struggle to get production off the ground and meet targets.

"I would say I’ve had some pretty tough life experiences and Tesla’s probably responsible for two-thirds of all personal and professional pain combined, to give you a sense of perspective there," he said during a conference in July.

Musk has spent sleepless nights on factory floors while his car company struggled with automation, battled regulatory bodies over self-driving tech, and faced significant amounts of criticism over quality assurance.

While many of those issues have not gone away this year, the company is nonetheless hellbent on delivering cars — or at least the ones it has already been producing.

To pull it off, the company is focusing its efforts on opening new factories, and squeezing every drop of production out of its existing facilities as well.

And that kind of breakneck pace has its costs, with factory employees coming forward to describe "modern-day sweatshop" working conditions, as well as suffering from stress, lack of sleep, and anxiety.

The Fremont plant in particular has seen its fair share of controversies lately. Just last week, a Tesla employee died after collapsing while on the assembly line. A month earlier, the local police department reported that one Tesla employee had shot and killed another in the factory's parking lot.

While Tesla hasn't been immune to the global supply chain issues caused by the COVID-19 pandemic, the company's California plant in particular has managed to weather the storm by relying on in-house software developers.

Meanwhile, other automakers, which struggled far more with the same chip shortages, were left in the dust.

"Tesla, born in Silicon Valley, never outsourced their software — they write their own code," University of Pennsylvania professor Morris Cohen told The New York Times, adding that "other carmakers were not able to do that."

"Tesla controlled its destiny," he added.

Will Tesla be able to keep up the pace? Given its recent expansions, particularly in the EU and Chinese markets, production will likely keep growing.

But whether that will be enough to meet investors' sky-high expectations remains to be seen.