Donald Trump Doesn't Seem to Know Anything About Wind Power

"I never understood wind. You know, I know windmills very much." 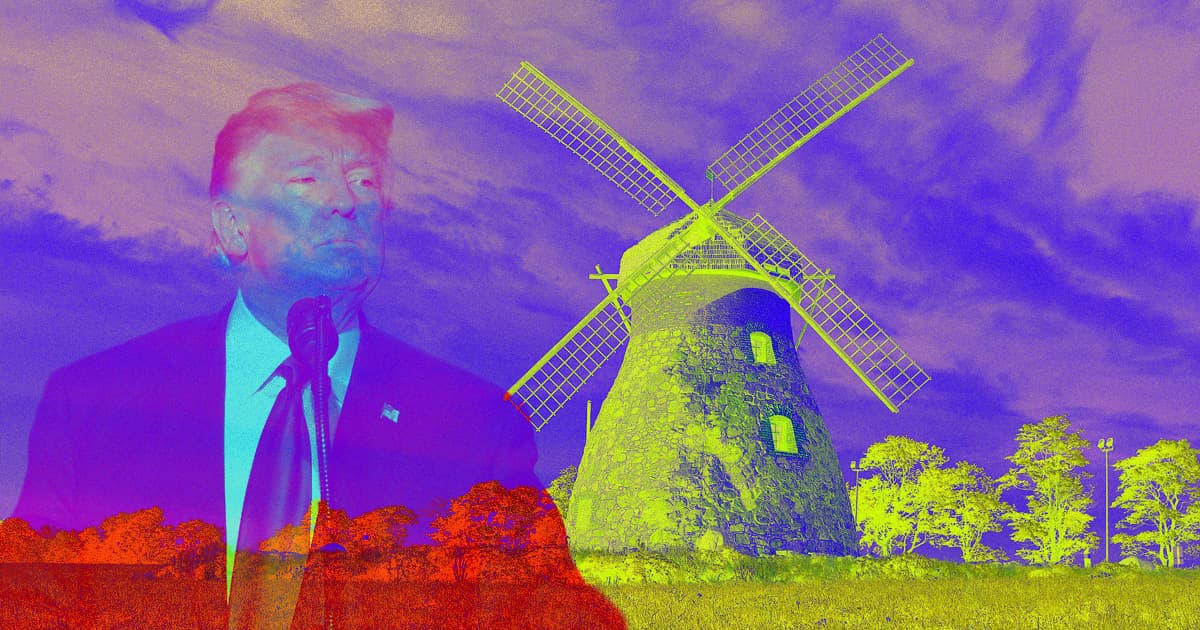 U.S. President Donald Trump is simultaneously an expert on wind power and completely baffled by it — by his own estimation, anyways.

"I never understood wind," Trump said during a speech at conservative nonprofit Turning Point USA's Student Action Summit on Saturday, according to the official White House transcript. "You know, I know windmills very much. I have studied it better than anybody."

But the rest of Trump's speech implies that only the first part of that statement is true: he knows very little about wind power other than the fact that he's against it.

Trump also cited the process used to produce turbines as a mark against them.

"They are made in China and Germany mostly, very few made here, almost none," he said, "but they are manufactured, tremendous — if you are into this — tremendous fumes and gases are spewing into the atmosphere."

But as pointed out by The Hill, researchers from the American Wind Energy Association found that a "typical wind project repays its carbon footprint in six months or less." Meanwhile, the benefits of the devices can last for a typical lifespan of 20 to 25 years — a good investment no matter how you look at it.

Another of Trump's beefs with wind turbines? They kill birds.

"You want to see a bird graveyard?" Trump asked the audience. "You just go. Take a look. A bird graveyard. Go under a windmill someday. You’ll see more birds than you’ve ever seen ever in your life... A windmill will kill many bald eagles. It’s true."

Though it's hard to say for sure how many bald eagles fall victim to wind turbines, the devices do kill approximately 234,012 birds in the U.S. every year, according to the U.S. Fish and Wildlife Service.

But for comparison, collisions with glass buildings — like the ones Trump has made a career stamping his name on — kill 599,000,000 birds every year. That's 2,559 times more birds than turbines.

Trump didn't mention that during his speech, but he did trot out another frequent claim: that wind turbines negatively impact property values — and once again, it's clear he doesn't have his facts straight.

"So they make these things and then they put them up," he told the audience. "And if you own a house within vision of some of these monsters, your house is worth 50 percent of the price."

While some smaller studies have found that a nearby wind farm can decrease a home's value, larger studies — including a 2013 analysis of more than 50,000 homes in nine states — concluded that turbines have no negative impact on property values.

Still, given that Trump has previously claimed that wind turbines decrease home values by 75 percent, this new 50 percent figure does get him closer to the truth — so while he clearly doesn't "know windmills very much," his claims about wind energy do appear to be getting slightly most accurate than they've been in the past. Very slightly.

Read This Next
Solar Slay
Solar Powered Machine Turns CO2 and Waste Plastic Into Valuable Fuel
Remember Donald?
Donald Trump Goes on Bizarre Rant Against Electric Cars
Good Neighbors
German Government Says It May Keep Nuclear Plant Open After All
Unreliable Friends
Archipelagic Nation Sick of Other Countries Breaking Climate Change Promises
Brands We Love
Wondering if Solar Energy Is Right for Your Home? Find Out for Free.
More on Earth & Energy
From Bad to Worse
Yesterday on the byte
Global Warming Is Worse Than We Thought, AI Tells Scientists
RIP Fred
Yesterday on the byte
Instead of Predicting Length of Winter, Groundhog Simply Dies
Fly Guy
Wednesday on the byte
Bird Advocates Horrified by Pigeon Dyed Pink For Gender Reveal Party
READ MORE STORIES ABOUT / Earth & Energy
Keep up.
Subscribe to our daily newsletter to keep in touch with the subjects shaping our future.
+Social+Newsletter
TopicsAbout UsContact Us
Copyright ©, Camden Media Inc All Rights Reserved. See our User Agreement, Privacy Policy and Data Use Policy. The material on this site may not be reproduced, distributed, transmitted, cached or otherwise used, except with prior written permission of Futurism. Articles may contain affiliate links which enable us to share in the revenue of any purchases made.
Fonts by Typekit and Monotype.