"Wind and solar are easily capable of picking up the slack." 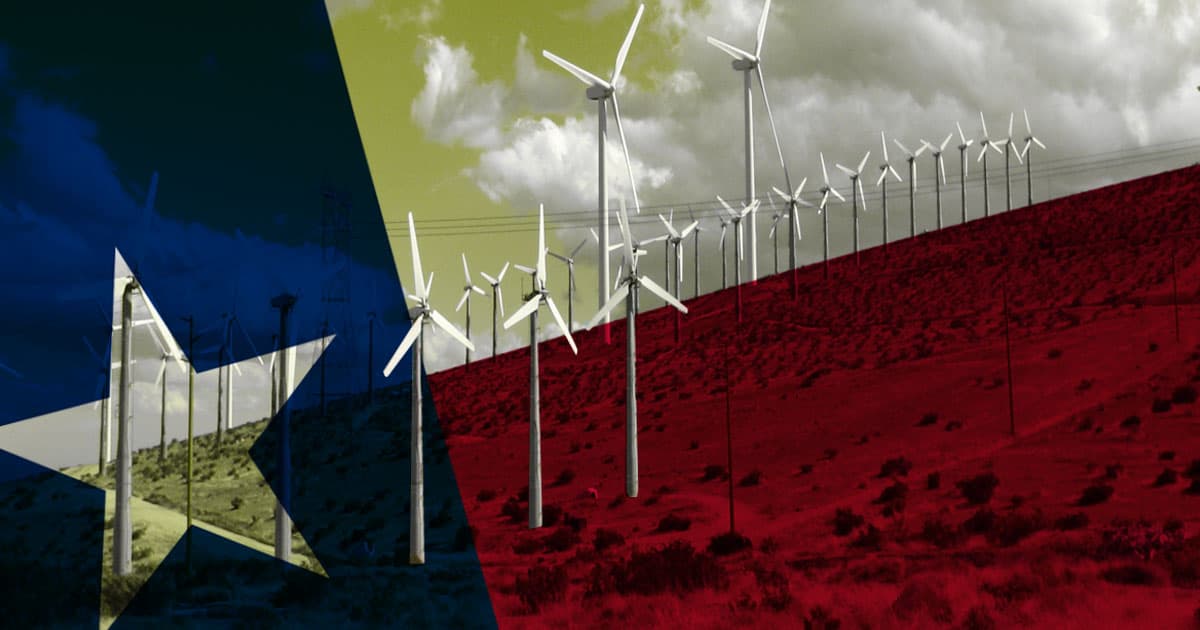 Fossil fuel may comprise a large part of the Texas economy, but new research shows that the state has the natural resources to ditch coal entirely and still meet its electricity needs.

"There is no where else in the world better positioned to operate without coal than Texas is," report co-author Dan Cohan, a professor of civil and environmental engineering at Rice University, told the Houston Chronicle. "Wind and solar are easily capable of picking up the slack."

According to the research, recently published in the journal Renewables: Wind, Water, and Solar, Texas is in the fortuitous position of being able to replace the 25 percent of its electricity that it still sources from coal-burning plants without investing in expensive energy storage facilities.

That's because the state's substantial renewable energy resources — wind and solar — operate on complementary schedules. Solar installations across the state only generate power during the day, and wind farms in West Texas provide large amounts of power at night. Wind turbines on the Gulf Coast, meanwhile, kick into high gear late on summer afternoons, when sea breezes blow inland.

The heartening report comes as renewables overtook coal as Germany's primary energy source — an auspicious historical moment that seems to demonstrate that wind and solar can not only complement fossil fuels, but also evolve into an independent source of energy.

"We’re poised on the edge of a much cleaner grid than we have today," Cohan told the Chronicle. "There’s an opportunity with coal coming offline to have wind and solar step up. It’s the cheapest way to do things, whether or not you care about the environment."

More on Texas: Amazon’s Largest Wind Farm Will Be Able to Power 90,000 Homes in Texas

Read This Next
Coal Crypto
Bitcoin Mining Company Buys Entire Coal Power Plant
Brands We Love
Adding Solar Power to Your Home Is Complicated. But It Doesn't Have to Be.
Bigger in Texas
Elon Musk, Who Moved to TX For Less Regulation, Is Furious That the Power Went Down
Brands We Love
The SolarLamp 50 Might Just Be the World's Best All-in-One Solar Light
Brands We Love
Find out if Residential Solar Power Is Worth It for Your Home With a Free Assessment
More on Earth & Energy
Save Yourselves
6:25 PM on the byte
Furious Marsupial So Thirsty For Sex That It’s Dying, Scientists Warn
Stem Ware
Friday on the byte
Scientists Discover World's Oldest Preserved Vertebrate Brain
From Bad to Worse
Thursday on the byte
Global Warming Is Worse Than We Thought, AI Tells Scientists
READ MORE STORIES ABOUT / Earth & Energy
Keep up.
Subscribe to our daily newsletter to keep in touch with the subjects shaping our future.
+Social+Newsletter
TopicsAbout UsContact Us
Copyright ©, Camden Media Inc All Rights Reserved. See our User Agreement, Privacy Policy and Data Use Policy. The material on this site may not be reproduced, distributed, transmitted, cached or otherwise used, except with prior written permission of Futurism. Articles may contain affiliate links which enable us to share in the revenue of any purchases made.
Fonts by Typekit and Monotype.