The company is burning through 600,000 tons of coal per year. 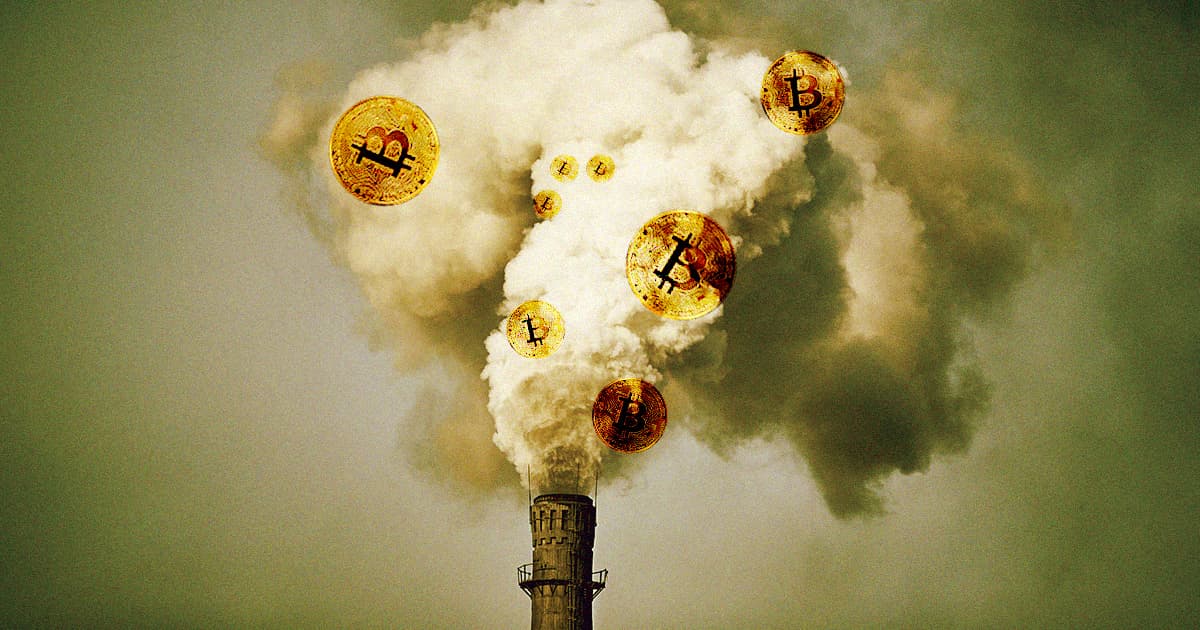 The plant is now burning about 600,000 tons of coal a year, a troubling return to a highly polluting form of energy and raising red flags among environmental advocates.

"These miners don’t just need cheap energy, but a stable source of power because their machines need to run 24/7, and fossil fuel sources are best suited for it," Alex de Vries, a Dutch economist, researcher and founder of Digiconomist, told NBC.

Stronghold is now planning to expand its operations by buying two more coal waste plants in the area, according to NBC. Coal waste plants use up environmentally hazardous piles of coal waste, byproducts of mining operations that can leach contaminants into waterways — but burning it still emits plenty of greenhouse gases.

While cryptocurrency mining operations are flourishing stateside, other parts of the world are actively trying to stop it, like China, which declared all crypto transactions illegal on Friday.

A major concern driving that crackdown in China is the astronomical amount of energy being used to mine crypto. The country aims to become carbon neutral by 2060.

Companies like Stronghold are returning to coal, a source of electricity that was recently surpassed by renewables for the first time in US history last year, because it's cheap — environment be damned.

Stronghold is now preparing for its initial public offering. The company maintains it is "environmentally beneficial" in Securities and Exchange Commission filings, pointing to the fact it is using up coal waste.

"Simply put, we employ 21st century crypto mining techniques to remediate the impacts of 19th and 20th century coal mining in some of the most environmentally neglected regions of the United States," the company wrote in its SEC filing.

But environmentalists argue there are better alternatives to dealing with waste coal, such as diverting it to lined landfills or planting sea grass on top of the piles.

Local legislatures, however, appear to be more in favor of cutting taxes for cryptocurrency mining operations than investing in cleaning up the environment.

Read This Next
Bitcoin Ban
Another Entire Country Just Banned Crypto Mining
Stealing Gas
Bitcoin Miners Open Secret Power Plant, Get Busted
Hot Tub Mine Machine
Neighbors Accuse Bitcoin Mining Facility of Warming Up Entire Lake
Silent Hill
Horrifying "Black Snow" Blankets Russian Towns
Ciao, Coal
New Research: Texas Could Ditch Coal Entirely for Wind and Solar
More on Earth & Energy
His Power
Yesterday on the byte
Scientists Develop Compound That Kills So Efficiently They Named It After Keanu Reeves
Dishonorable Disc...
Monday on the byte
Scientists Alarmed by Video of Deep Sea Mining Company Spewing Waste Into Ocean
Save Yourselves
Feb 5 on the byte
Furious Marsupial So Thirsty For Sex That It’s Dying, Scientists Warn
READ MORE STORIES ABOUT / Earth & Energy
Keep up.
Subscribe to our daily newsletter to keep in touch with the subjects shaping our future.
+Social+Newsletter
TopicsAbout UsContact Us
Copyright ©, Camden Media Inc All Rights Reserved. See our User Agreement, Privacy Policy and Data Use Policy. The material on this site may not be reproduced, distributed, transmitted, cached or otherwise used, except with prior written permission of Futurism. Articles may contain affiliate links which enable us to share in the revenue of any purchases made.
Fonts by Typekit and Monotype.