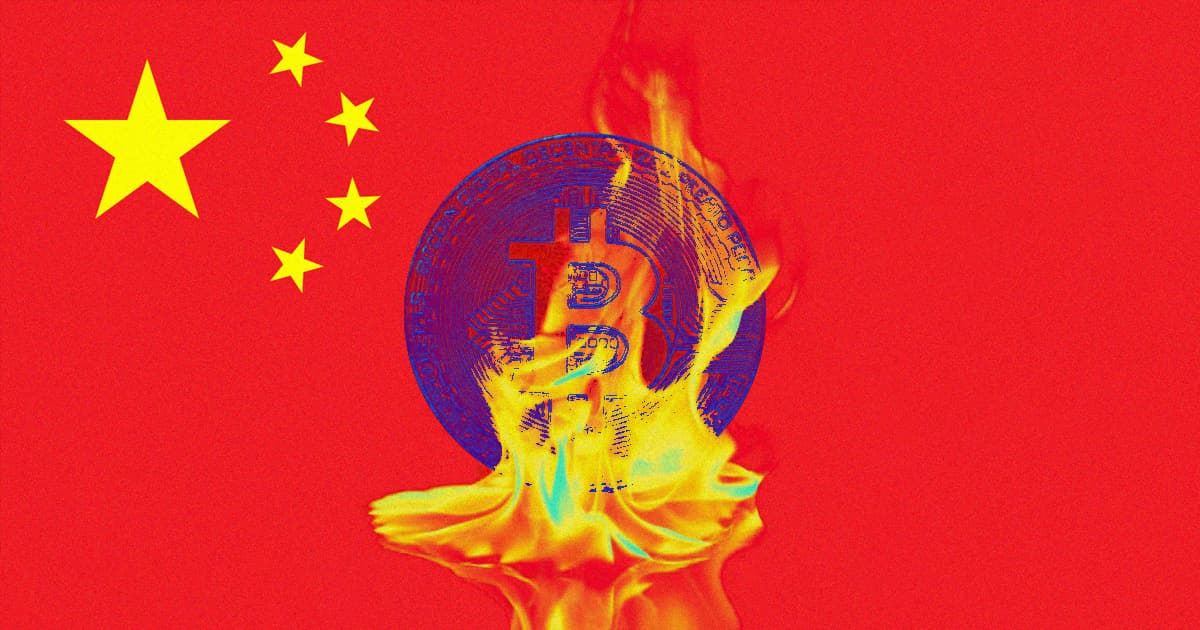 It's a game of whack-a-mole.

It's a game of whack-a-mole.

China has declared all cryptocurrency transactions and any related activities within its borders illegal — a massive crackdown that has sent Bitcoin plummeting yet again.

The cryptocurrency fell from highs of just over $45,000 early Friday morning down to under $41,000 around 7 am Eastern.

The People’s Bank of China made the announcement in a Q&A posted to its website. "Overseas virtual currency exchanges that use the internet to offer services to domestic residents is also considered illegal financial activity," the post reads, as translated by CNBC.

Those working for foreign crypto exchanges will also be investigated. The Bank also announced it is improving its systems to monitor crypto-related activities.

Basically, crypto appears to be over in China, at least for the time being.

The news comes after China started cracking down on cryptocurrency mining in May, days after banning all financial institutions and payment companies from doing any business related to cryptocurrencies.

The Chinese government will "crack down on bitcoin mining and trading behavior, and resolutely prevent the transfer of individual risks to the society," according to a statement at the time, as translated by the South China Morning Post.

Just like today, the previous crackdowns also led to Bitcoin slipping, caused by mass sell-offs. Its value has fallen by roughly half between April and July this year, Bloomberg reports.

The government has maintained that it's also cracking down on energy-intensive cryptocurrency mining activities to meet its aggressive carbon goals. The country is planning to become carbon neutral by 2060.

"The Chinese regulators have always been extreme in their views and these comments are not new," said Vijay Ayyar, head of Asia Pacific with cryptocurrency exchange Luno in Singapore, told Bloomberg.

Intriguingly, the continued announcements may indicate that China is having a tough time completely stamping out cryptocurrency activity.

"The interesting part is also why they continue making these statements," Avyar added. "Its probably because they sense continued unabated activity in China and hence having to go on an overdrive."

More on Bitcoin: Bitcoin.org, Which Taught Users Not to Get Scammed, Gets Hacked and Replaced With Scam

Artificial Baby
Chinese Scientists Create System to Care For Embryos in Artificial Womb
2. 1. 22
Read More
Brands We Love
If You’re Ready To Invest in Crypto, Here’s the Best Place To Start
10. 20. 21
Read More
Brands We Love
This Mobile Crypto Wallet Keeps Your Holdings Safe, Secure, and Offline
10. 16. 21
Read More
+Social+Newsletter
TopicsAbout UsContact Us
Copyright ©, Camden Media Inc All Rights Reserved. See our User Agreement, Privacy Policy and Data Use Policy. The material on this site may not be reproduced, distributed, transmitted, cached or otherwise used, except with prior written permission of Futurism. Articles may contain affiliate links which enable us to share in the revenue of any purchases made.
Fonts by Typekit and Monotype.