"The wording of the statement did not leave much leeway for cryptocurrency mining." 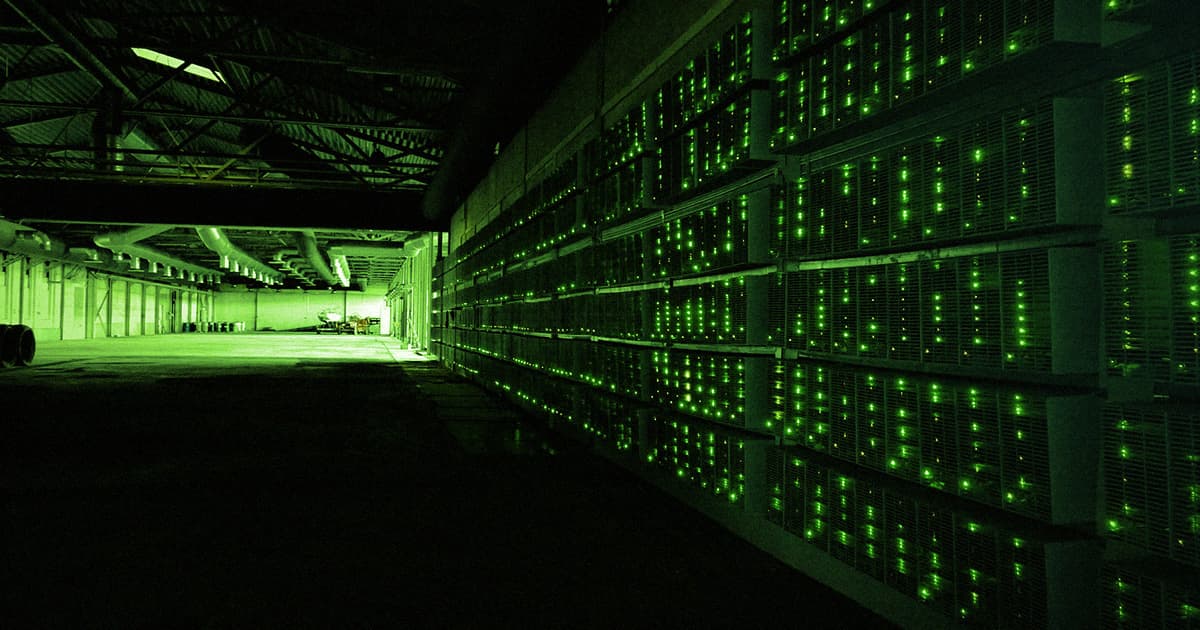 According to a new announcement by the Chinese government, the country is looking to crack down on cryptocurrency mining.

The Chinese government will "crack down on bitcoin mining and trading behavior, and resolutely prevent the transfer of individual risks to the society," according to the statement, as translated by the South China Morning Post.

That's a huge deal for the cryptocurrency world, because China accounts for 65 percent of Bitcoin mining globally, according to Coindesk. A massive industry has grown around the practice, with warehouses full of computers relying on fossil fuels to generate enough power to turn a profit in the competitive mining industry.

"The wording of the statement did not leave much leeway for cryptocurrency mining," Li Yi, chief research fellow at the Shanghai Academy of Social Sciences, told SCMP. "When all mining activities are banned in China, it will be a turning point for the fate of bitcoin, as a large chunk of its processing power is taken out of the picture."

The statement, however, doesn't explicitly mention an outright ban of the practice. Nonetheless, the wording certainly doesn't leave much hope for the countless businesses that have cropped up and profited greatly from recent surges in its value.

That surge in early 2021 was followed by a significant slump, compounded by billionaire and Tesla CEO Elon Musk. Tesla had first allowed payments to be made in Bitcoin back in March, but Musk reversed that policy only a few months later, citing environmental concerns.

Now, it looks like China is also alarmed by cryptocurrency mining's considerable carbon footprint. The country wants to cut emissions by at least 65 percent by 2030.

Meanwhile, Musk is trying to tackle the issue in the US as well.

"Spoke with North American Bitcoin miners," the CEO wrote in a Monday tweet. "They committed to publish current and planned renewable usage and to ask miners [worldwide] to do so."

The environment isn't the only concern for both China's and the US government. Both countries have also cited concerns over illicit uses of cryptocurrencies.

Just last week, the US Treasury Department announced that businesses must report any cryptocurrency transaction greater than $10,000 to the IRS, Ars Technica reported.

It appears that China also cracking down on illegal crypto-related activity.

"It is necessary to maintain the smooth operation of the stock, bond, and foreign exchange markets, severely crack down on illegal securities acts, and severely punish illegal and criminal financial activities," reads the Chinese government's statement.

The country is also working on its own centralized digital currency, albeit relying on fundamentally different technologies than cryptocurrencies.

With a switch to a central bank digital currency (CBDC), the Chinese government will have an unprecedented level of scrutiny over most transactions occurring within its borders, critics say. Transactions made via cryptocurrencies, in contrast, are largely anonymous.

Some argue China's crackdown on cryptocurrencies could be seen as a way to clear the way for its own digital currency.

"It’s no surprise to me, as Chinese capital controls can be challenged by cryptocurrency purchases in the country and transfers out of the country," CEO for APAC at Saxo Markets told Bloomberg last week.

"So avoiding use of them in the country is essential to maintaining capital controls," he added. "The only tolerable digital currency to a government with strong capital controls is their own [Central Bank Digital Currency]."

Cracking down on all cryptocurrency mining will be a major task for local law enforcement and a complete ban could take years to enforce.

The move will also likely have a great effect on the value of popular cryptocurrencies like Bitcoin. Without China in the picture, the future of traditional cryptocurrencies that rely on industrial-scale mining practices is starting to look a lot more uncertain.

Read This Next
Heating Up
Employees at TikTok Apparently Have a Secret Button That Can Make Anything Go Viral
Bot Rush
An Overwhelming Number of Porn Bot Accounts "Drowned Out" Chinese Protest Content on Twitter
Please Don't
TikTok Caught Planning to Spy on the Locations of Specific American Citizens
Power Struggle
Former Google CEO Issues Dire Warning About China
Dealbreaker
Shocker: Elon Musk's Twitter Deal May Already Be Falling Apart
More on Future Society
Primate Theft
Yesterday on the byte
It Was a Very Bad Weekend for Monkeys Being Stolen From Zoos, Apparently
Ring The Alarm
Yesterday on the byte
Whistleblower Claims Facebook Can Secretly Drain Your Phone's Battery on Purpose
I Silence Thee
Jan 28 on futurism
Leaked Messages Seem to Show Elon Musk Using Twitter to Punish His Enemies
READ MORE STORIES ABOUT / Future Society
Keep up.
Subscribe to our daily newsletter to keep in touch with the subjects shaping our future.
+Social+Newsletter
TopicsAbout UsContact Us
Copyright ©, Camden Media Inc All Rights Reserved. See our User Agreement, Privacy Policy and Data Use Policy. The material on this site may not be reproduced, distributed, transmitted, cached or otherwise used, except with prior written permission of Futurism. Articles may contain affiliate links which enable us to share in the revenue of any purchases made.
Fonts by Typekit and Monotype.