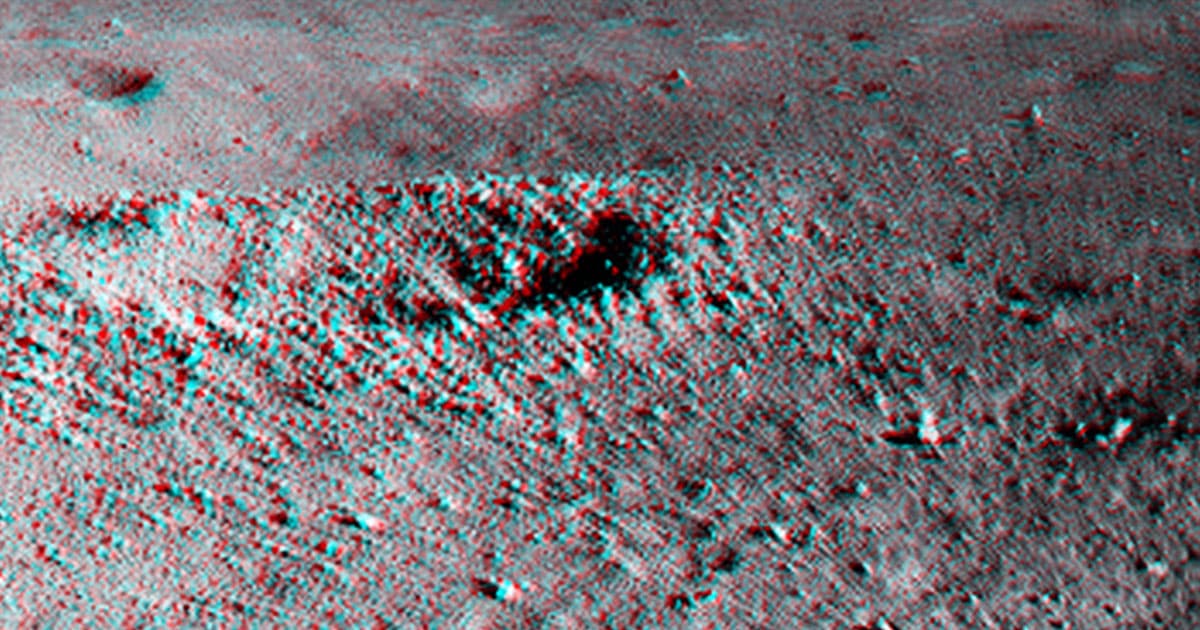 Drum roll please... The "gel-like" material China dramatically announced that it had discovered on the far side of the Moon last year was, well, melted bits of Moon rock.

That's the somewhat deflating realization a team of Chinese scientists made after they studied the substance, discovered by China's Yutu 2 rover last July, as Space.com first reported.

On January 3 2019, China's Chang'e 4 lunar probe made history by becoming the first spacecraft to land on the far side of the Moon, the mysterious, less-studied side facing away from Earth. In tow was the Yutu 2 rover, designed to crawl the rocky landscape over several freezing months.

Then in September, China claimed that it's rover had stumbled upon an unusually colored “gel-like” substance on the bottom of an impact crater, puzzling scientists. The strange material was described as a "colored mysterious substance" in the rover’s diary, as translated by Google.

And according to a new paper published in the journal Earth and Planetary Science Letters, a team of Chinese scientists were able to confirm their suspicions: the material, measuring 20 by six inches, is likely the result of material melting due to either meteor impacts or volcanic eruptions, or "impact melt breccia."

As detailed in the paper, the glassy greenish substance is similar to two specific samples that were returned by NASA's Apollo 15 and 17 missions.

Their guess is based on data obtained by Yutu 2's panoramic and hazard avoidance cameras, as well as the rover's Visible and Near-Infrared Spectrometer (VNIS) instrument. Thanks to bad lighting, that guess is still not, uh, set in stone yet.

"We don't have samples from this region that would help inform the model parameters," NASA postdoctoral program fellow at the Goddard Space Flight Center Dan Moriarty told Space.com. "For this reason, the precise regolith composition results presented in this paper may not be completely accurate."

Read This Next
Artificial Baby
Chinese Scientists Create System to Care For Embryos in Artificial Womb
Safe Vaccines
China Is Giving People a COVID Vaccine That Isn't Done Being Tested
Vaccine Hackers
US Officials: Chinese Hackers Are Targeting Vaccine Research
Shots Shots Shots
Chinese COVID-19 Vaccine Effective in Monkeys
Lockdown
CA Hospital Accidentally Releases Patient With Deadly Virus
More on Sci-Fi Visions
LIfe Finds a Way
Yesterday on the byte
Billionaire Private Astronaut Suggests Reviving Dinosaurs
Health Revelation
Nov 22 on neoscope
Chris Hemsworth Reveals Grim Genetic Test Results, Will Take Break From Acting
Cybersecurity Dis...
Nov 13 on the byte
Insurance Company Refuses to Pay Ransom, So Hackers Start Releasing Health Records of Up To 10 Million People
READ MORE STORIES ABOUT / Sci-Fi Visions
Keep up.
Subscribe to our daily newsletter to keep in touch with the subjects shaping our future.
+Social+Newsletter
TopicsAbout UsContact Us
Copyright ©, Camden Media Inc All Rights Reserved. See our User Agreement, Privacy Policy and Data Use Policy. The material on this site may not be reproduced, distributed, transmitted, cached or otherwise used, except with prior written permission of Futurism. Articles may contain affiliate links which enable us to share in the revenue of any purchases made.
Fonts by Typekit and Monotype.