Elon Musk, Who Moved to TX For Less Regulation, Is Furious That the Power Went Down 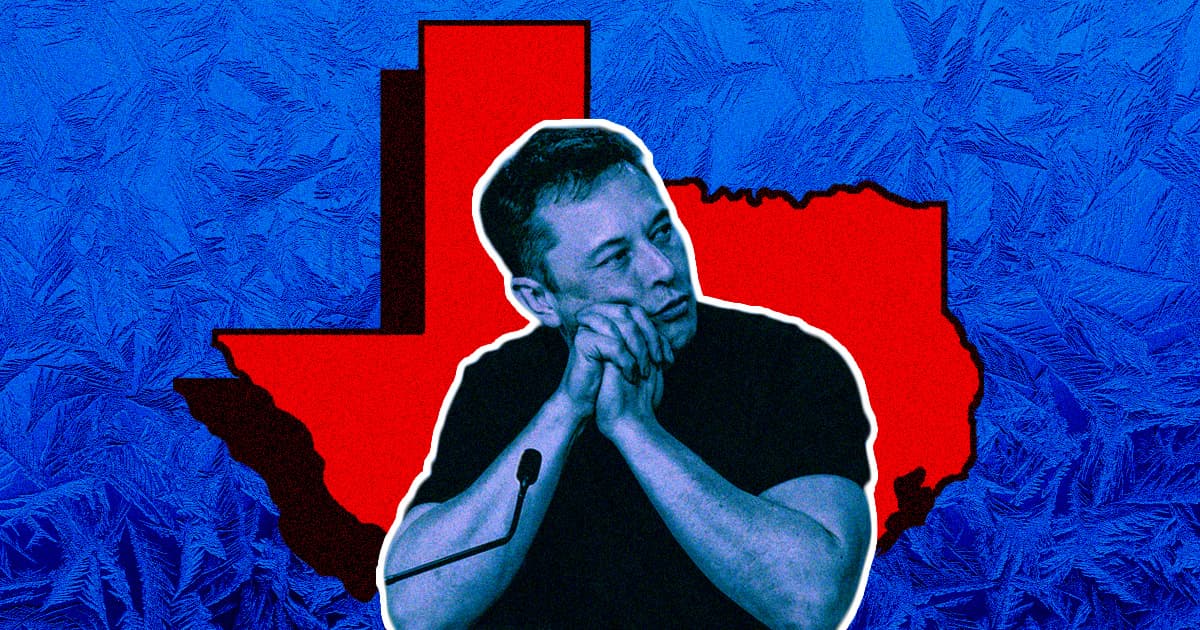 When Tesla CEO Elon Musk moved to Texas earlier this year to escape stiff regulations and high taxes, he couldn't have predicted a cold snap that brought the state's infrastructure to its knees.

In a tweet this week, Musk lashed out at the state's energy agency, the Electric Reliability Council of Texas (ERCOT), quipping that the body is "not earning that R."

The historic deep freeze caused several persistent blackouts, plunging roughly four million Texans into darkness. ERCOT is now being investigated by Texas governor Greg Abbott, who called the company "anything but reliable" in a Tuesday announcement on Twitter.

All told, it was a textbook case of infrastructure collapse. Uninsulated pipes started buckling under the pressure, grocery store shelves stood empty — and right wing political pundits attempted to shift the blame on renewable energy while racing off on holiday to a balmy Cancun.

Compounding the trouble, Texas had previously shut itself off from the rest of the country's electricity grid, meaning that it wasn't able to import power from neighboring states to keep its inhabitants from freezing to death.

That also means Texas isn't beholden to federal regulations — one of the qualities that drew Musk to the Lone Star state in the first place. A whole decade ago, grid regulations warned Texas that its power plants wouldn't be able to survive plunging temperatures, as Bloomberg reports. Recommendations to insulate and heat pipes fell on deaf ears, leading to households flooding across the state this week.

During a February 2011 deep freeze, power plants failed and blackouts rolled the state. Sound familiar? Even then, regulators warned that previous winter weather events wreaked havoc with unprotected power equipment, according to Bloomberg.

While political pundits raced to blame green energy on the infrastructure collapse, frozen over wind turbines were the least of the state's crumbling infrastructure's problem.

In fact, Musk has a vested interest in bringing 21st century energy storage to Texas in the form of large-scale Tesla battery pack farms, such as the one that brought New South Wales' power grid back from the brink several times already in eastern Australia since being installed in 2017.

It's unclear if such a battery pack would float enough electricity in case Texas ever ends up freezing over again. But it could present at least a partial solution to a political entity steadfast in its support of the oil and gas industry.

And besides, the offer of help would be coming from Elon Musk, a poster child of the American Dream — not big government.

Read This Next
Fusion Futility
Elon Musk Slams Fusion, Says Future of Energy Is Wind and Solar
Remember Donald?
Donald Trump Goes on Bizarre Rant Against Electric Cars
The Kids Won't Be Alright
Elon Musk Warns That Humankind Will "End Up in Adult Diapers"
Mine! Mine!
Elon Musk Suggests Tesla Might Start Mining Lithium
Stop Aging Please
Elon Musk Says That Immortality Tech Would Be Very Dangerous
More on Earth & Energy
Brave <3
Yesterday on the byte
Bill Pledges to Keep Flying Private Jet While Speaking Out Against Climate Change
Sowloon Walled City
Yesterday on the byte
China Growing Pigs in Huge High Rise Buildings
Crust Punk
Yesterday on the byte
Scientists Discover Molten Hell Zone Beneath Earth's Tectonic Plates
READ MORE STORIES ABOUT / Earth & Energy
Keep up.
Subscribe to our daily newsletter to keep in touch with the subjects shaping our future.
+Social+Newsletter
TopicsAbout UsContact Us
Copyright ©, Camden Media Inc All Rights Reserved. See our User Agreement, Privacy Policy and Data Use Policy. The material on this site may not be reproduced, distributed, transmitted, cached or otherwise used, except with prior written permission of Futurism. Articles may contain affiliate links which enable us to share in the revenue of any purchases made.
Fonts by Typekit and Monotype.