Why Apple Should Buy Tesla and Make Elon Musk CEO 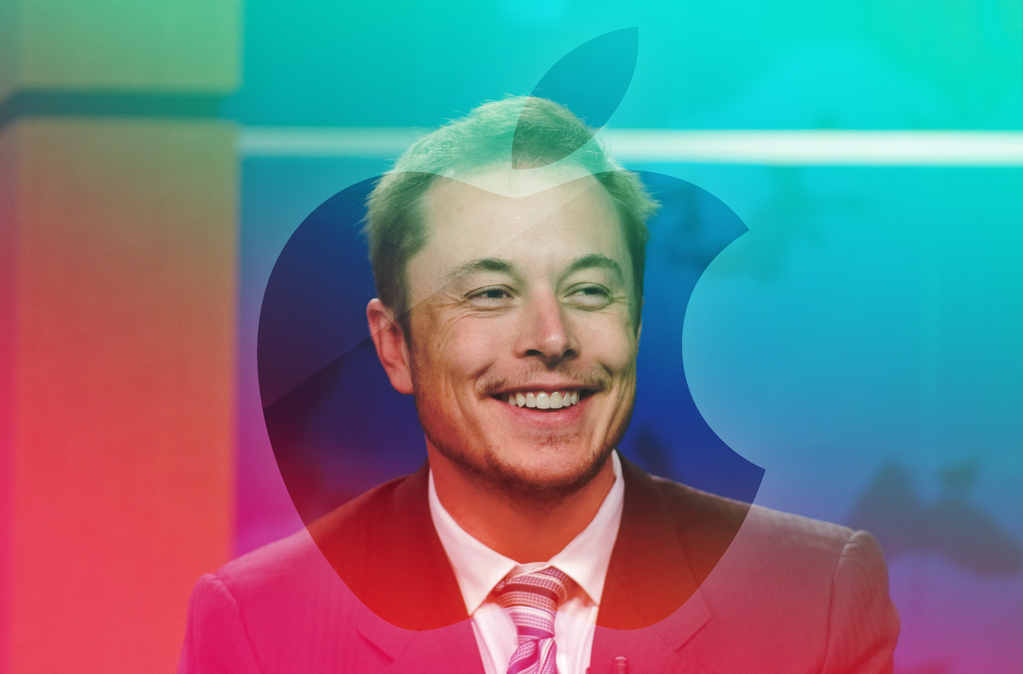 Elon Musk is the unstoppable innovation juggernaut of our time. He has taken us to space, and is single-handedly leading us into a new age in energy. However his company, Tesla, is plagued by issues related to capital. Conversely, Apple is a powerhouse of stability. Their sales are steady, probably because they continually pour out the same tired products that (they know) people are willing to buy. They also don't take risks. Ever.

This is why Apple should buy Tesla and make Elon Musk the CEO—Apple lacks innovation and growth, and Tesla lacks cash and financial stability. To understand this rationale you only need to turn to Apple's stock.

Apple has tremendously priced stock, thanks to the success of the iPhone, iPad, and to a lesser extent, the Apple Watch. This gives the company an amazingly high budget to work with. The choice that they now face is how to best invest that budget. To this end, what Apple needs is to produce something new and inventive, which it hasn't done in a very long time.

Who says Apple doesn't innovate anymore? Well, almost everyone. Just Google search, "Apple is no longer innovative." On the first page alone you get this:

The Observer: “Last week, Apple unveiled iPhone 7 — or, rather, the company’s Twitter account accidentally leaked the release video before CEO Tim Cook could make the announcement. It’s no big deal because iPhone 7’s most noteworthy upgrades are that it comes in black, is water resistant and no longer has a headphone jack. Nothing earth-shaking.”

The Conversation (John Rice, Professor of Management, University of New England and Nigel Martin, College of Business and Economics, Australian National University): “Not only is Apple suffering from a major lack of hardware innovation but it’s also being outdone in software and online, where apps reign supreme. It quite possibly signals the company’s eventual demise.”

Dezeen: “Has Apple lost its touch? Dezeen readers are unconvinced by the tech giant's latest product announcements and feel the company has lost its way. This special edition of our regular comments update looks at reactions to its controversial new wireless headphones (pictured), updated Apple Watch and the iPhone 7.”

Forbes: “[Like] previous years we have grown to accept that the polish and style of delivery masks a growing problem at Cupertino: Apple has run out of juice.”

CNBC: “'There's no real world shocking innovation happening anymore from Apple,' the fellow at Arthur & Toni Rembe Rock Center for Corporate Governance at Stanford University, told 'Closing Bell.' 'It was nine years ago that the iPhone came out ... since then it's been giving us bigger screens and smaller screens ... and we go along,' he noted, before adding that Apple's series imitates Netflix.”

Even friendlies will agree that Apple is much stronger when it comes to customer experience and selling its own ecosystem than it is at generating new products. But just keeping your existing customers happy isn't enough. Perhaps most telling is the fact that Apple is losing out to other companies in contests that it started. For example, according to the J.D. Power 2017 U.S. Tablet Satisfaction Survey, customers like Microsoft's Surface tablets more than iPads.

Meanwhile, Tesla is amazingly innovative, transforming our society in a number of sectors, all united by a future-facing commitment to clean energy and better design. The company makes cars, energy storage systems, solar roofs—and they likely won't stop there. It seems like every few months, they come out with a new major R&D announcement. This is because Tesla places an enormous emphasis on new ideas, and although not all of them work, enough of them do that investors are inspired to buy Tesla.

Musk's company is also growing at a staggering rate, but it is also unstable – vacillating between stocks that surge and plummet (and all the while, they are hemorrhaging cash). When you search "Tesla losing money," you get a slightly more mixed result:

Forbes wants you to know that, although Tesla is, in fact, losing money, people like its CEO.

CNBC: “Wall Street sees Tesla, not classic companies like Ford, as the future of cars. Tesla is aiming to be the Apple of the car business.”

MarketWatch: “But even the average investor can tell the difference between a profitable and unprofitable company, and Tesla is definitely the latter.”

Several outlets reveal just how much Tesla has fluctuated over the years in relation to its sales and figures. Particularly telling is the conversation regarding how much money the company loses on every car it sells.

Reuters: “It's crunch time for Tesla Motors. The Silicon Valley automaker is losing more than $4,000 on every Model S electric sedan it sells, using its reckoning of operating losses, and it burned $359 million in cash last quarter in a bull market for luxury vehicles.”

And a few other notable examples from Seeking Alpha and Investopedia showcase that the debate is still raging:

Of course, saying that Tesla has money problems raises some (rather fair) questions. Case in point, if Tesla is losing so much money, why is their stock still worth so much? Just this past week, Elon Musk responded to critics that called Tesla "overvalued," pointing out that its value is based not only on cash flow, but also on the innovation consumers see in its products.

In other words, investors see the work that Tesla does as being highly relevant in the future. They feel confident that it will hold its value and grow. But that's betting on the future, and it doesn't help Tesla achieve stability today.

Apple will find itself in an increasingly precarious position unless it chooses another course. The company has benefitted from Samsung's woes (what with all the phones exploding and catching fire), but that isn't going to last. Samsung may, and very likely will, recover. The company unveiled a new smartphone at the end of March, for example, and similar ventures indicate that it is working hard to rectify its current, troubled reputation. Thus, Apple will soon (once again) find itself going head-to-head with competitors that are just as capable of turning out devices with the most notable "new" feature being that they come in a new color.

Imagine you're one of the best and brightest new minds, and you're graduating from the best engineering and science programs in existence. You can write your own ticket. Would you rather work on never-before-seen breakthroughs in technology or endless iterations of the same products?

No one is called to create the latest version of the same passable earbuds; that's not a calling. It's just a job. Transforming the way people think about storing solar power? Creating entirely new ways to produce enough power to get off-grid? Disrupting the automobile industry? Those are callings.

If Apple buys Tesla, Apple will be able to attract the kind of talent they want (and need) to regain their place at the forefront of new technologies.

Tesla and Elon Musk have already seen that the future demands diversified product lines. This seems rather obvious, as we can't predict what will happen in the world of tomorrow: what we will want and need, or how new generations of people will think, live, work, and play. The longer Apple stays within its narrow computer/tablet/smartphone lanes, the tougher it will be to break free and diversify.

Alright, so one final question: why does Musk have to be the one who runs this mega technology machine? Because Tim Cook is a careful, strategic, incremental manager of assets focused on protecting what's there and coaxing slow growth. That's what he does, and he's extremely skilled at that. However, that's not what's called for in this pairing. And while that kind of strategic management might provide a very useful counterpoint to Musk's style of leadership, it seems unlikely that both would stick around.

Of course, it is very unlikely that Cook will step down (very unlikely). Yet, in all probability, the only way Elon Musk would even dream about accepting this offer is if he is offered the CEO position. As a result, the only way that this proposition is truly feasible is if Apple's Board goes after this option and, essentially, pushes Tim Cook out. It's an interesting idea—one that could be very beneficial for both companies—but don't hold your breath.

Read This Next
Helping Hand
5 Ways Elon Musk Can Help the Ship Trapped in the Suez Canal
Cartoons from tomorrow
Coming Soon: Our First Book Based on Futurism Cartoons
Futurism
7 Ways Tesla Is Changing Everything
More on Op-Ed
SPONSORED CONTENT
9. 30. 21 on futurism
Buy Delta 8 THC Online: Top D8 Companies of 2021
SPONSORED CONTENT
9. 27. 21 on futurism
Delta 8 Carts Near Me: Top 15 Brands to Buy From
Mirror, Mirror
5. 16. 21 on the byte
Watch the James Webb Space Telescope Open Its Massive, Golden Mirrors
READ MORE STORIES ABOUT / Op-Ed
Keep up.
Subscribe to our daily newsletter to keep in touch with the subjects shaping our future.
+Social+Newsletter
TopicsAbout UsContact Us
Copyright ©, Camden Media Inc All Rights Reserved. See our User Agreement, Privacy Policy and Data Use Policy. The material on this site may not be reproduced, distributed, transmitted, cached or otherwise used, except with prior written permission of Futurism. Articles may contain affiliate links which enable us to share in the revenue of any purchases made.
Fonts by Typekit and Monotype.