The doomed petro shouldn't stop other countries from trying a national cryptocurrency, but it probably will. 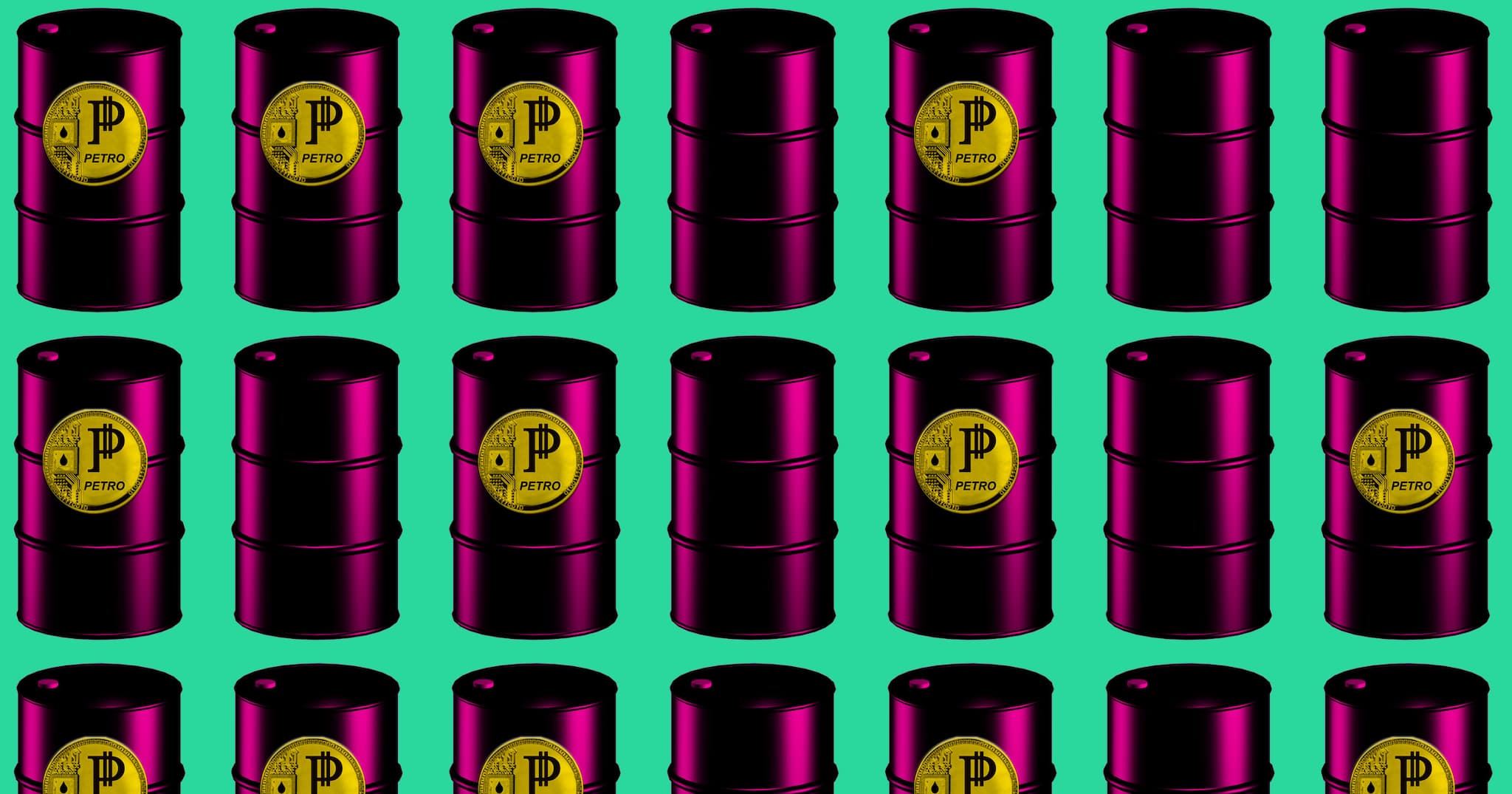 Venezuelans are faced with a terrible choice:

It got this way because the country's leader, Nicolás Maduro, made some pretty terrible economic decisions. For one thing, he put all of Venezuela's (economic) eggs in one notoriously bumpy basket: oil. The country's always had a lot of it, but for a long time, it was just one of many resources the country exported, along with heavy industry products (steel, aluminum, cement) and agricultural products like rice and corn. By 2017, though, oil had taken over, accounting for 98 percent of the country's export revenue. And when the price of oil took a nosedive in 2014 (from $115 to just $35 a barrel), the Venezuelan economy plummeted, too.

Basically all domestic businesses took a big hit — imported goods cost more, so local businesses were forced to charge higher prices, even for basic necessities. People could afford less, so they spent less money, which meant the government made less money in tax revenue. And instead of increasing interest rates or cutting back its own spending, the government took exactly the wrong tack: printing more money.

And so the process of inflation began. Hyperinflation — an extreme form of inflation where a currency's value jumps erratically — has gripped the country since the beginning of 2018. And it's only predicted to get worse — by the end of the year, inflation is predicted to hit a staggering 1,000,000 percent.

About 15 percent of the population is desperately fleeing from an economic crisis. Crime rules the streets, while critics of president Maduro's authoritarian regime are threatened with political persecution.

It is, unfortunately, a situation characteristic of a rapidly collapsing economy. The bolivar is rapidly becoming worthless. It's only logical, then, that people turn to more stable alternatives like US dollars traded on the black market, or even bartering for goods and services.

In a desperate attempt to stop the spiral of hyperinflation, Maduro recently introduced a new currency called the "sovereign bolivar." To be clear, the "sovereign bolivar" is simply a rebranding of Venezuela's previous currency. The only real difference is that its value simply had five zeros lobbed off the end — in other words, something previously worth 1,000,000 bolivars is now worth just 10 sovereign bolivars. But its value will also be tied to the petro, a state-funded cryptocurrency that launched back in February (the previous bolivar was loosely tied to the U.S. dollar).

This change won't do much to help Venezuelans, Steve Hanke, a professor of applied economics at Johns Hopkins University and a leading expert on hyperinflation and exchange rate regimes, tells Futurism. "The removal of zeros and the introduction of a new currency with a new name does absolutely nothing. It's a cosmetic kind of change." Just days after the devaluation, thousands of businesses closed temporarily to figure out how to adapt to the "sovereign bolivar," according to the BBC.

The petro (the cryptocurrency the sovereign bolivar is tied to) is doing something groundbreaking, however — it's one of the first attempts to introduce a state-backed cryptocurrency. If the situation were different, Venezuela could provide a promising model for other nations looking to shift to a blockchain-based currency. But that's not what's going to happen in Venezuela. Instead, the petro might become a cautionary tale that could discourage other nations from introducing similar state-backed cryptocurrencies.

The whole point of introducing the petro was to boost an ailing economy. It probably won't achieve that goal. That's in part because, as a cryptocurrency, the petro lacks many of the elements that make cryptocurrencies work: transparency, and decentralization with no central authority fixing prices.

Most cryptocurrencies are volatile because their value is tied to how many coins of that type there are, and how popular that coin is — in other words, a classic case of supply and demand. That's the reason Bitcoin's value has yo-yoed an awful lot over the last year — people bought it, then worried its value would tank thanks to bad press, and sold some of it off.

The Venezuelan government, however, decided to peg the value of the petro to the cost of a barrel of oil (about $60). On the plus side, that makes the petro more stable than your average cryptocurrency (even though the Venezuelan government can change the value anytime because it controls so much oil). But it also means that a decentralized market of investors, should any decide to buy the petro, wouldn't have any effect on the petro's value.

The government's scheme displays a fundamental misunderstanding of how the blockchain works.

The government's scheme displays a fundamental misunderstanding of how the blockchain works. The currency's white paper, released by the Venezuelan government in February, didn't offer much clarity. Typically, a white paper details the structure and backing of a given cryptocurrency, but the petro's paper is too convoluted to actually spell any of that out. According to the paper, the petro is a "sovereign crypto asset backed by oil assets and issued by the Venezuelan State" to "spearhead for [sic] the development of an independent, transparent and open digital economy" for all of its citizens.

What it doesn't tell us, as hackernoon points out: how a petro could actually be redeemed for a barrel of oil — a glaring omission that ultimately makes the coin look pretty darn sketchy.

And that's what international experts saw when they read the paper, immediately calling the petro out for being a "scam" that was purely meant to circumvent international sanctions and access foreign markets.

"If you read the white paper, it's internally inconsistent. Smoke and mirrors, vague and so forth," says Hanke.

The initial coin offering (ICO) for the petro was as mysterious as the coin's announcement – no transparency or investor confidence here. Hoping to sell some 38.4 million petro tokens (worth about US$6 billion) to support the rapidly devaluing bolivar, Maduro gave early investors a whopping 60 percent discount to incentivize trade. That, however, ended up making the whole launch look even more fishy. The government announced it made US$3.3 billion in the pre-sale, but this number was never verified by any independent organization, and the Venezuelan government has been (characteristically) tight-lipped about the petro since its ICO.

In its first day on sale, the petro raised US$375 million as part of a "private sale," Reuters reports. But even now, six months later, we have no idea who bought so much petro. Some suspect the buyer is Russia. After finding evidence of shady business ties between Venezuela and Russia, TIME called the petro a "half-hidden joint venture."

The rest of the world isn't exactly rooting for the petro. U.S. president Donald Trump banned any U.S. citizens from buying any Venezuelan petros, calling the endeavor "another attempt to prop up the Maduro regime, while further looting the resources of the Venezuelan people," a spokesperson from the Treasury Department told Reuters in January. Without official backing by the international community, it won't stand much of a chance of ever becoming legitimate legal tender (if it even exists beyond some shady business deals in the first place).

No blockchain expert in the world could make an accurate guess as to how the petro is doing right now, or if it's even being used.

"[The petro] is going to be another one of these things that gives the whole notion of cryptocurrency a bad name."

Frankly, it doesn't even really matter, because no Venezuelans are actually using the petro. “We have not seen a single Petro circulating, nor its smart contracts, or rules of the token, and much less its blockchain,” Jorge Farias, the CEO of Venezuelan startup Cryptobuyer, a Latin American crypto exchange, tells Wired.

"It doesn't trade. It's a fiction. No one's using it, so the whole thing is a scam," Hanke says.

And nor does anyone seem likely to start using it. Despite Maduro's attempts to use the petro to stabilize an economy in free fall, hyperinflation hasn't slowed at all. But Venezuela isn't out of options yet.

If history is any indication, there's really only one way out of the spiral: the U.S. dollar. In fact, despite what the government wants the international community to believe, Venezuelan citizens have already turned away from the bolivar. "The dollar has replaced the bolivar for all practical purposes already. But not officially — [Venezuela] is not officially dollarized," says Hanke.

"Dollarization" (or "currency substitution") is the process of replacing the current local currency with a far more stable anchor, like the U.S. dollar, the Euro, or even gold. Lots of experts outside the country are all for dollarizing the Venezuelan economy because it's been the only thing to stop other countries as they've suffered an economic free fall.

"Dollarization is the only way to stop the hyperinflation immediately," says Hanke. For instance, he advised the president of Yugoslavia in 1999 to replace the Yugoslav dinar with the Deutschmark. And his dollarization plan had an immediate effect. "Everything settled down literally within hours."

Could the petro ever become a functional currency? Hanke doubts it. "You're talking about something in theory and not in the real world. The petro doesn't exist. That's why the whole thing is a scam. You're just talking about a theoretical idea that is so poorly written and conceived." And that fact shouldn't come as a surprise to anybody. "This is pretty much par for the course for the Venezuelan government."

"You're talking about something in theory and not in the real world. The petro doesn't exist. That's why the whole thing is a scam.

For blockchain-based cryptocurrencies like the petro to even stand a chance at a national level, they need a central authority that holds enough of the anchor reserves (U.S. dollar, Euro or otherwise) to back it up. "The cryptocurrency world will only succeed in the long-run if they are organized as currency boards," says Hanke. A currency board acts as a central authority (in the place of a central bank) that makes decisions about the exchange rate — it allows for unlimited exchange of the local currency and can only add more local currency if it has equal amounts of foreign currencies. "Until then, these cryptocurrencies are just not currencies. They are highly speculative assets but they are so volatile that they are not stable units of account," Hanke says.

Who knows, the world might just not be ready yet for a national blockchain-based currency. But Maduro's petro isn't a good assessment of how ready we are. It's effectively a cautionary tale of misunderstanding a very powerful technology. Instead, Maduro's government is using the petro to distract the international community from the nation's economic instability, diaspora, and political unrest. The doomed petro experiment shouldn't prevent other nations from taking a gamble on a national cryptocurrency, but it very well might.

Read This Next
Hot Chick
Madonna Releases Extremely Explicit NFT Collection
From Our Partners
Ready to Start Making Big Returns on Your Retirement Money? RocketDollar Can Help.
Brands We Love
If You’re Ready To Invest in Crypto, Here’s the Best Place To Start
From Our Partners
Learn A New Computer Language With This Coding & Engineering Bundle Sale
Brands We Love
This Mobile Crypto Wallet Keeps Your Holdings Safe, Secure, and Offline
More on Sci-Fi Visions
What is Happening
Wednesday on the byte
Elon Musk Sets His Twitter Account to Private
From the Dept. of...
Monday on futurism
The Best Humidifiers of 2023
Human v. Giraffe
Jan 24 on the byte
Chaotic Italian Fashion Line Baffles Facial Recognition Software
READ MORE STORIES ABOUT / Sci-Fi Visions
Keep up.
Subscribe to our daily newsletter to keep in touch with the subjects shaping our future.
+Social+Newsletter
TopicsAbout UsContact Us
Copyright ©, Camden Media Inc All Rights Reserved. See our User Agreement, Privacy Policy and Data Use Policy. The material on this site may not be reproduced, distributed, transmitted, cached or otherwise used, except with prior written permission of Futurism. Articles may contain affiliate links which enable us to share in the revenue of any purchases made.
Fonts by Typekit and Monotype.