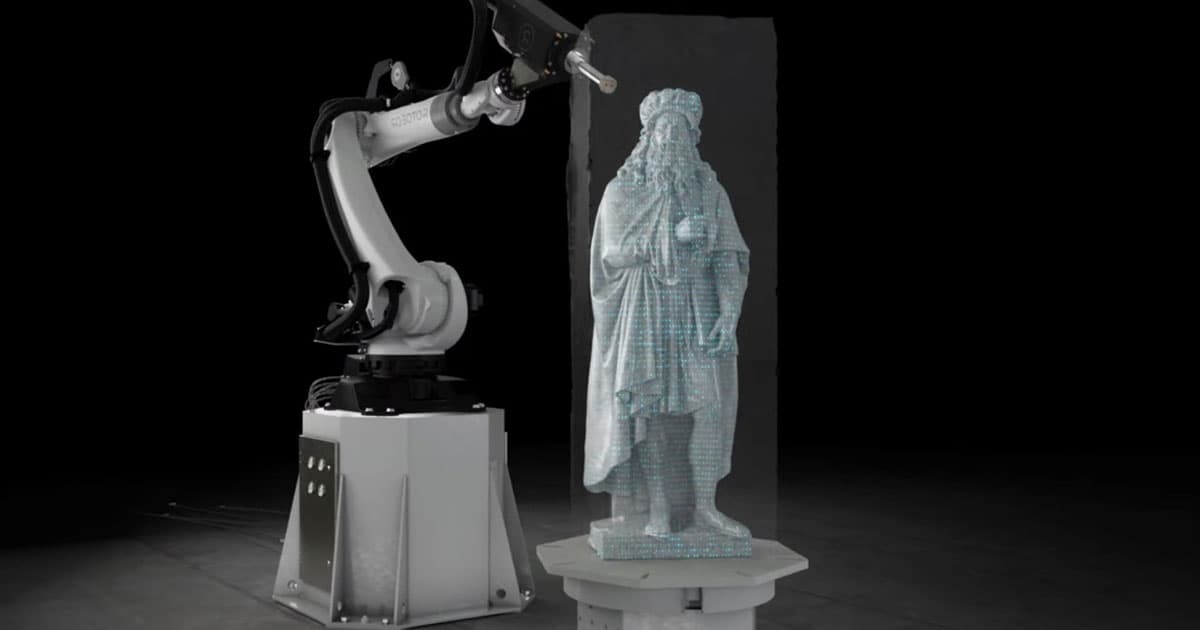 Italy Invents Robot That Carves Sculptures Out of Marble Like Michelangelo

"We are entering a new era of sculpture, which no longer consists of broken stones, chisels and dust, but of scanning, point clouds and design."

"We are entering a new era of sculpture, which no longer consists of broken stones, chisels and dust, but of scanning, point clouds and design."

An Italian startup called Robotor has invented a machine that's nearly as good at carving marble masterpieces out of Carrara marble as its Renaissance-era predecessors.

As CBS News reports, Robotor founder Giacomo Massari is convinced his robot-machined marble statues are nearly as good as those made by humans. Almost.

"I think, let's say we are in 99 percent," he told CBS. "But it's still the human touch [that] makes the difference. That one percent is so important."

Massari even went a step further arguing that "robot technology doesn't steal the job of the humans, but just improves it" — a bold statement, considering the mastership that went into a form of art that has been around for thousands of years.

The company claims the technology is nothing short of revolutionary.

"The quarried material can now be transformed, even in extreme conditions, into complex works in a way that was once considered unimaginable," the company boasts on its website. "We are entering a new era of sculpture, which no longer consists of broken stones, chisels and dust, but of scanning, point clouds and design."

Unsurprisingly, not everybody is happy with robots taking over the craft, arguing that something important could be lost in the process of modernizing processes with new technologies.

"We risk forgetting how to work with our hands," Florence Cathedral sculptor Lorenzo Calcinai told CBS. "I hope that a certain knowhow and knowledge will always remain, although the more we go forward, the harder it will be to preserve it."

READ MORE: Could robots do the work of master marble sculptors? This one is "99%" there, according to its creator. [CBS News]

See Spot Attack
Company Mounts Paintball Gun on Robot Dog to Shoot Up Art Gallery
2. 22. 21
Read More
Save Yourselves
Furious Marsupial So Thirsty For Sex That It’s Dying, Scientists Warn
Yesterday
Read More
We're in Hell
Scammers Are Already Convincing Idiots They Can Get Rich Using ChatGPT
Yesterday
Read More
+Social+Newsletter
TopicsAbout UsContact Us
Copyright ©, Camden Media Inc All Rights Reserved. See our User Agreement, Privacy Policy and Data Use Policy. The material on this site may not be reproduced, distributed, transmitted, cached or otherwise used, except with prior written permission of Futurism. Articles may contain affiliate links which enable us to share in the revenue of any purchases made.
Fonts by Typekit and Monotype.