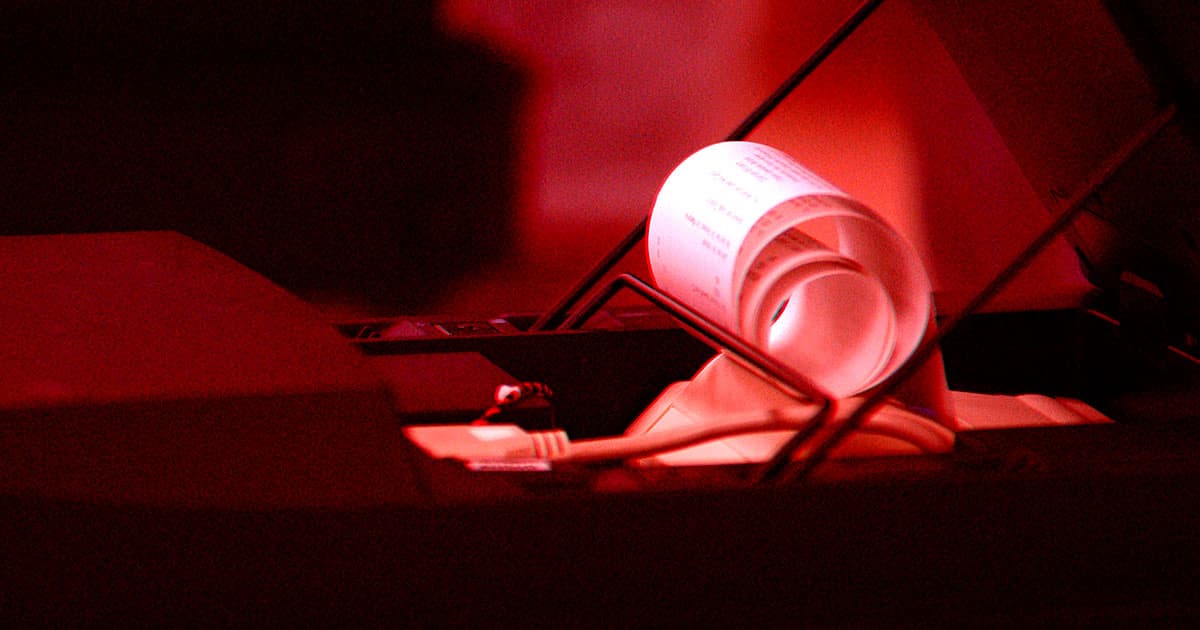 "Thousands of printers are exposed."

"Thousands of printers are exposed."

If Karl Marx and Friedrich Engels were alive today, they might have hacked into businesses' receipt printers to churn out the Communist Manifesto.

Which is apparently actually happening, at several employers where workers have reported anti-work manifestos randomly printing out on receipts. A report from Vice revealed that someone has hacked at least dozens of businesses’ receipt printers to spam these pro-worker messages.

"ARE YOU BEING UNDERPAID?" reads one receipt. "You have a protected LEGAL RIGHT to discuss pay with your coworkers."

"Begin ORGANIZING A UNION," another one said. "GOOD employers are not afraid of these, but ABUSIVE ones are."

A Spectre Haunting This Arby’s

The manifestos point readers to the subreddit r/antiwork, a much-in-the-discourse community dedicated to combating abusive labor practices and workers’ rights, where numerous posts of the receipts began sprouting up.

"Yo these keep randomly printing out at my job," one user wrote, "which one of you is doing this because it’s hilarious. Me and my co-workers need answers."

Some seem to be a little irked by the manifestos, though, with another user saying, "Love r/antiwork but please stop spamming my receipt printer."

The identity of the hacker — or hackers — is still a mystery. However, Andrew Morris, founder of cybersecurity firm GreyNoise, told Vice that whoever is hacking the printers is doing so "in an intelligent way."

"A technical person is broadcasting print requests for a document containing workers rights messaging to all printers that are misconfigured to be exposed to the internet," Morris told the site. He added that while he couldn’t confirm exactly how many printers have been hacked, he believes "thousands of printers are exposed."

It’s cool to see some honest-to-God cyberpunk activism out there in the world. After all, this is a scrappy hacker attempting to take down large companies with a computer and a simple message: Rise up against your capitalist, megacorp overlords — one receipt at a time.

More on hackers: iPhones Can Apparently Be Hacked Just By Texting Them

Drone Warfare
The U.S. Military Is Hiring Hackers to Kill Small Drones
4. 2. 19
Read More
Why You Should Never Go on the Internet Without a VPN, and How You Can Get One
6. 24. 17
Read More
CHON: Legacy
James Webb Discovers Coldest Ice in Known Universe, Harboring Molecules Essential For Life
Yesterday
Read More
+Social+Newsletter
TopicsAbout UsContact Us
Copyright ©, Camden Media Inc All Rights Reserved. See our User Agreement, Privacy Policy and Data Use Policy. The material on this site may not be reproduced, distributed, transmitted, cached or otherwise used, except with prior written permission of Futurism. Articles may contain affiliate links which enable us to share in the revenue of any purchases made.
Fonts by Typekit and Monotype.