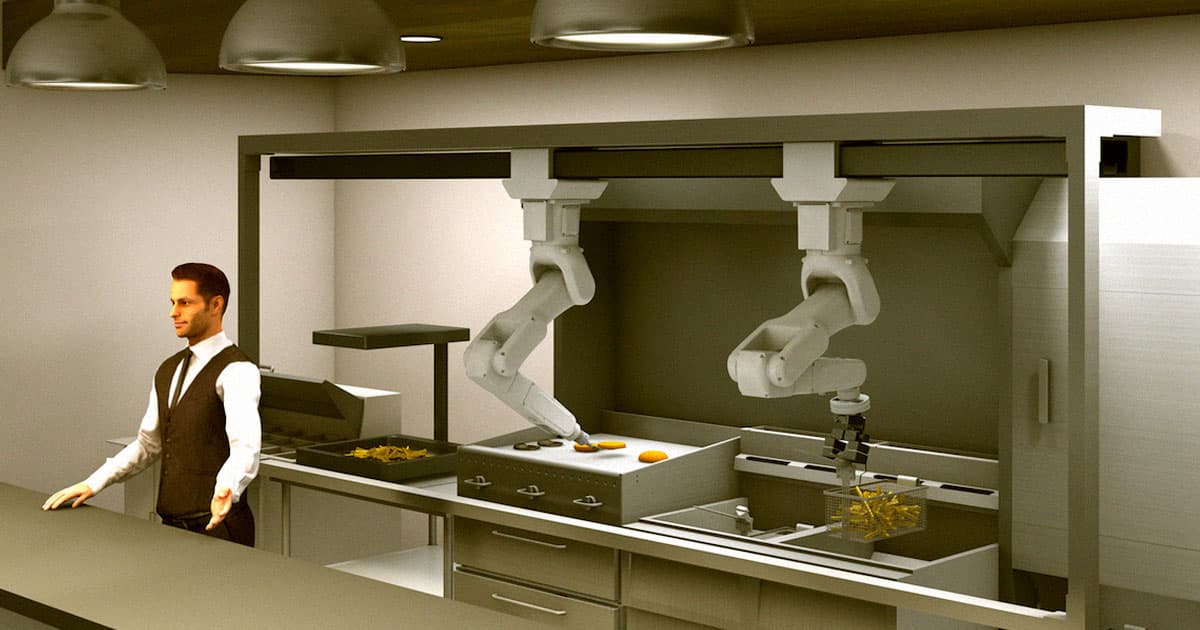 It's best to stay on Wingy's good side.

It's best to stay on Wingy's good side.

Artificial intelligence-enhanced robots have already overtaken the burger flippers of America — and they're coming for the deep fryers at Buffalo Wild Wings next.

Miso Robotics launched its burger-cooking robot arm Flippy back in 2018, as an easy way for restaurants to cut labor costs. Even Walmart tested Flippy in its many kitchens. Then in 2020, White Castle hired its own fleet of Flippys.

Now, the company is moving on to the next step of its world robotics domination plan with a new robot called Flippy Wings, or "Wingy."

As its name suggests, the robot is designed to use AI vision to identify pieces of food like chicken wings and then drop them into a deep fryer — yet another instance, it needs to be said, of robots coming for our jobs.

Despite its quirky name, Miso Robotics is placing a considerable amount of trust in the kitchen helper. Hopefully we will never see the day when Wingy decides to turn on its human masters and start launching scalding oil in the faces of its enemies — though it, and tech like it, could well cut into food service jobs.

Fry Day
Walmart Is Testing a Robot to Replace Its Fry Cooks
12. 12. 18
Read More
Your Next Burger Could Be Grilled by This Robot Chef
3. 10. 17
Read More
His Power
Scientists Develop Compound That Kills So Efficiently They Named It After Keanu Reeves
9:17 PM
Read More
+Social+Newsletter
TopicsAbout UsContact Us
Copyright ©, Camden Media Inc All Rights Reserved. See our User Agreement, Privacy Policy and Data Use Policy. The material on this site may not be reproduced, distributed, transmitted, cached or otherwise used, except with prior written permission of Futurism. Articles may contain affiliate links which enable us to share in the revenue of any purchases made.
Fonts by Typekit and Monotype.