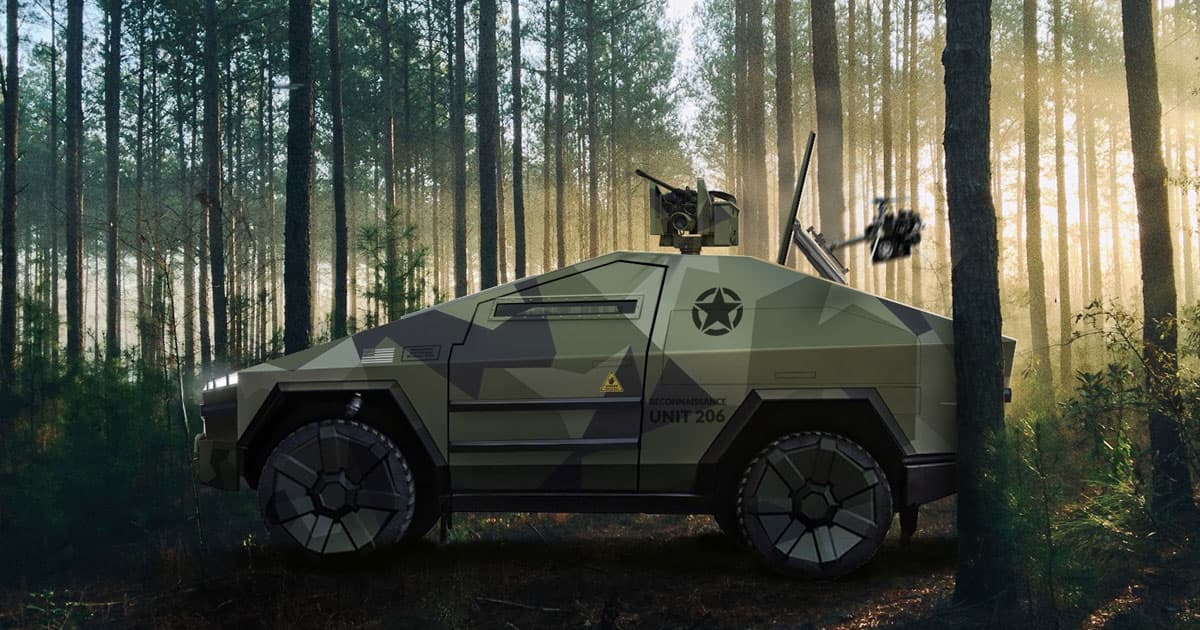 Quake in Terror at this Heavily Militarized Cybertruck

The "ultimate tactical combat Cybertruck" has a heavy machine gun — and much more.

The "ultimate tactical combat Cybertruck" has a heavy machine gun — and much more.

With the help of designer Jan Peisert, the YouTube channel Electric Future has come up with a terrifying new take on Tesla's already well-armored Cybertruck.

Their "ultimate tactical combat Cybertruck" looks like an actual tank ready for modern combat, including a roof-mounted gun — but for now, the concept is little more than a series of flashy renders.

While the electric car company envisions it to be more of a camping-friendly vehicle — albeit one that's eventually headed to Mars — Musk has also suggested that the vehicle could be "closer to an armored personnel carrier from the future," suggesting it could be one day used by the military.

According to the video, the vehicle could be especially well suited for recon or scouting missions, thanks to its quiet electric drivetrain. A surveillance drone could be launched from the truck bed as well.

But having the truck's bottom lined with a massive battery could quickly turn into disaster if it was struck from the underside by an IED — though that could perhaps be mitigated by a blast diffusion material.

READ MORE: Check Out These Ultimate Tactical Tesla Cybertrucks: A Pickup Truck On Steroids [Inside EVs]

More on the Cybertruck: ELON MUSK: THE CYBERTRUCK WILL “FLOAT FOR A WHILE”