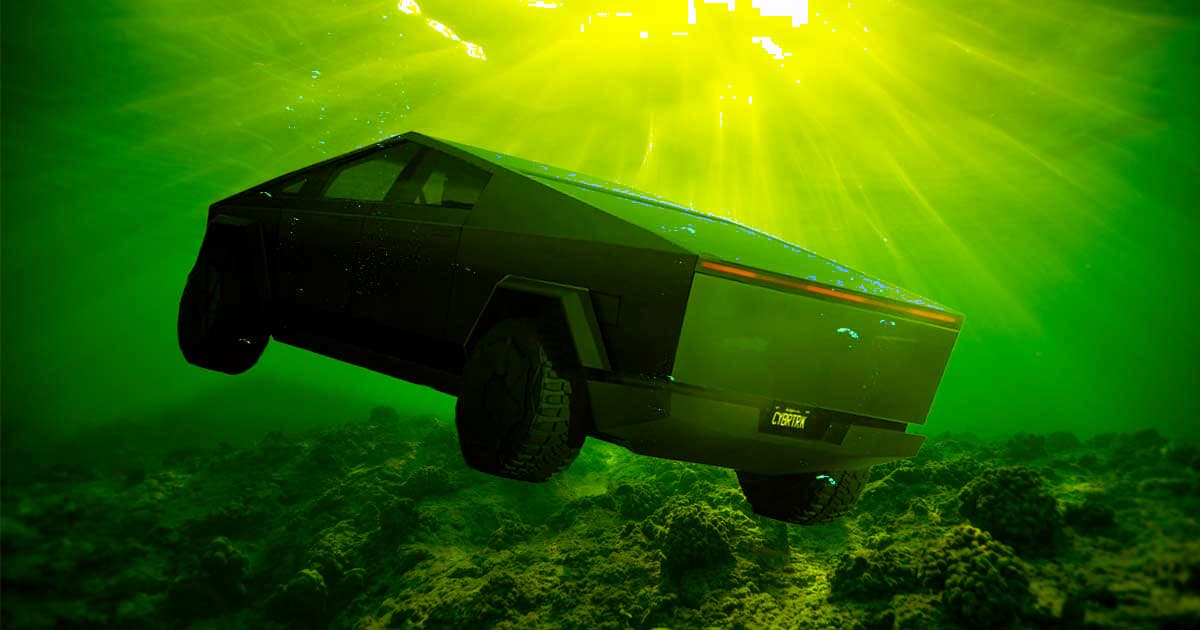 Elon Musk: The Cybertruck Will "Float For a While"

Tesla's futuristic off-roader will be able to cross streams.

Tesla's futuristic off-roader will be able to cross streams.

We All Float Down Here

According to a new tweet by Tesla CEO Elon Musk, the electric automaker's upcoming Cybertruck will be able to float — at least for short periods of time.

"Yes. It will even float for a while," Musk responded on Twitter about the vehicle's wading depth.

As Electrek reports, Musk bragged back in 2016 that Tesla's smaller Model S sedan also could float for a little while. "We *def* don't recommended this, but Model S floats well enough to turn it into a boat for short periods of time," Musk tweeted at the time. "Thrust via wheel rotation."

According to Musk, it was mostly thanks to the hermetically sealed battery pack lining the floor of the vehicle that could help it float.

Musk's dreams of going amphibian are well documented. For instance, we've long known about Musk's obsession with the 1976 Lotus Esprit sports car that transformed itself into a submarine in the 1977 James Bond picture "The Spy Who Loved Me."

In fact, he loved the scene so much that he reportedly bought a Lotus Esprit in 2013 for just shy of a million dollars.

On top of being able to float, the Cybertruck will also feature a cutting-edge dynamic suspension that's meant to allow it to off-road like no other.

Tesla is still looking where to manufacture the Cybertruck right now. There has yet been no indication that Tesla will deviate from its initial plans to roll out the first Cybertrucks in late 2021.

READ MORE: Tesla Cybertruck is going to be ‘able to float for a while,’ says Elon Musk [Electrek]

More on the truck: Watch a Half-Scale Cybertruck Beat a Ford F-150 in a Tug of War