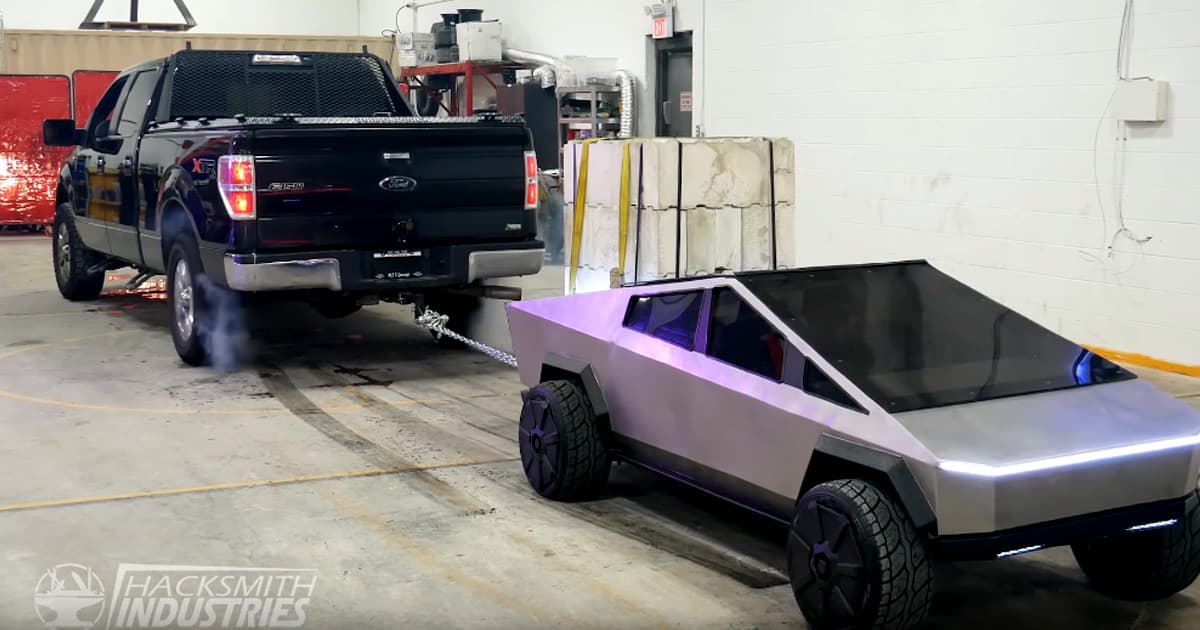 In just over a month, the YouTubers behind the account "The Hacksmith" have built a half-scale Cybertruck so powerful that it can win against a full-sized Ford F-150 pickup truck in a tug of war.

In a video uploaded today, the team of crafty Canadian engineers showed off what their adorable take on Tesla's brutalist stainless steel monstrosity can do. It can Tokyo drift around corners in the snow, perform burnouts, and even hold your cup of Tim Horton's on your morning commute.

In a series of escalating tug of wars, the Cybertruck is put through its paces, coming out successful against a range of smaller, but full-sized, vehicles.

To compensate for the weight of the full-sized F-150 truck, the team added 1,000 lbs worth of concrete bricks plus a bunch of extra barbell weights. The comparatively gigantic truck can be seen burning its tires, with the mini Cybertruck holding steady before pulling the truck for several feet.

However, in a preceding test without extra weights, the F-150 easily beat the scaled-down Cybertruck.

In a previous video, the team of engineers claimed their mini Cybertruck has a whopping 50 percent more torque than a 5-liter F-150 pickup truck.

Is it really a fair comparison? Not really, as many have pointed out after Tesla's November publicity stunt in which they set their own full-scale Cybertruck against the same vehicle garnered outrage.

There are a lot of variables from differing tires to weight distribution greatly affecting the pound feet of torque generated by each wheel axis as YouTube channel "Engineering Explained" explored in its video.

But does that make the video of a mini Cybertruck digging its adorable tires into the ground any less fun to watch? We don't think so.

More on the model: Watch This Adorable Mini Cybertruck Drift in the Snow