This Neural Implant Accesses Your Brain Through the Jugular Vein 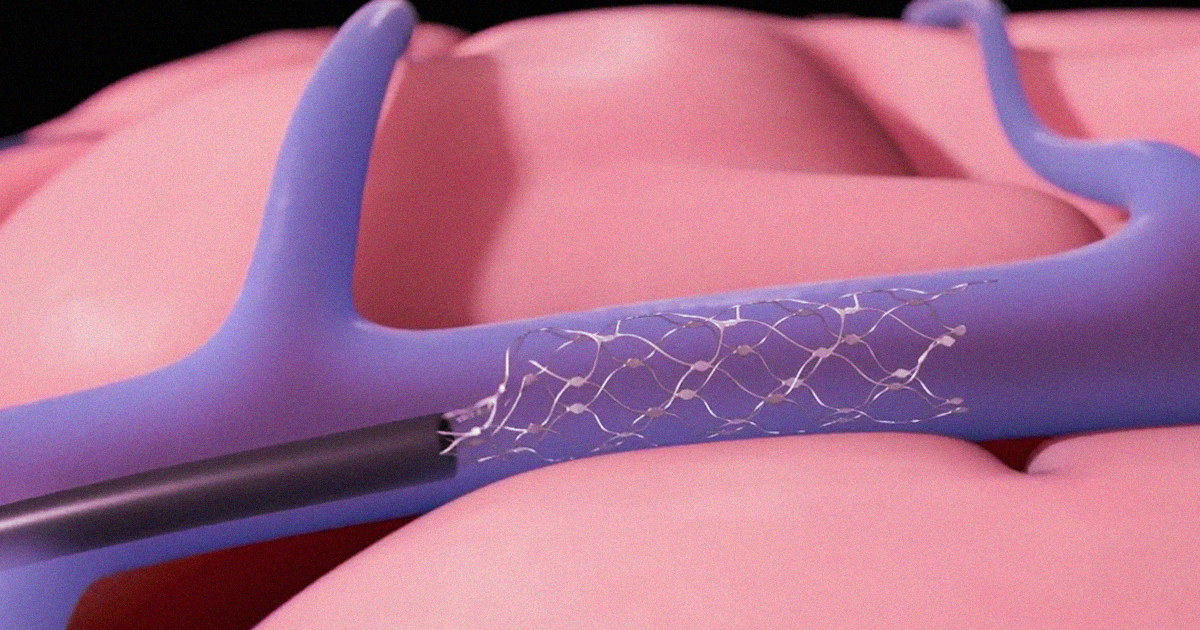 For the first time, doctors are preparing to test a brain-computer interface that can be implanted onto a human brain, no open surgery required.

The Stentrode, a neural implant that can let paralyzed people communicate, can be delivered to a patient's brain through the jugular vein — and the company that developed it, Synchron, just got approval to begin human experimentation.

By leaving the skull sealed shut, patients could receive their neural implants without running as great a risk of seizures, strokes, or permanent neural impairments, all of which can be caused by open-brain surgery.

In the coming months, five participants with paralyzed hands or mouths that prevent them from communicating will have Stentrodes implanted into their brains.

As potentially game-changing as a neural implant that circumvents open brain surgery could be, Synchron is taking things slowly.

The work of building a functional device and showing that it's safe in animal models is done; now it comes down to collecting and making sense of clinical data.

Before trials can begin, potential participants will need to undergo several brain scans. After that comes an evaluation from a neurologist to make sure that they would actually benefit from the Stentrode's neural interface and that their blood vessels are in good enough shape to have the device — which looks like a standard medical stent with built-in circuitry — travel through them on its path to the brain.

But once the trial begins, Oxley said that the patients will start training to use the device and its software to generate text with their thoughts.

"We're trying to help patients who have been paralyzed due to stroke or ALS or spinal cord injury, and who cannot communicate in the way they need to perform their work activities or their social activities," Oxley said. "We're working to generate text at a rate that's comparable to texting speeds on a smartphone. That's the goal."

One Step At A Time

A permanent neural implant that reads brain activity and churns out text could prove to be a valuable medical tool, but it also could provide doctors with an unprecedented 24/7 stream of neural data.

Oxley recognizes that an endless feed of brain activity could be invaluable to medical researchers, but he doesn't have plans to tap into that yet.

"[The Stentrode is] going to show us information that we hadn't had before. Whether that helps us understand other things is not what we're trying to do here," he said, clarifying that Synchron's primary goal is to get the new brain-computer interface working so that it can help paralyzed patients. "This is a novel data set, but this raises questions around privacy and security. That's the patient's data, and we can't be mining that."

Oxley told Futurism that they've already built in security protocols to make sure the study participants' brain data, which will be stored locally, is future-proofed, and added that he doesn't have plans — or regulatory approval — to analyze or study that data for other purposes in the future. In a follow-up email, he clarified that study participants are being asked to give consent for this particular experiment, but not to hand over their neural data for future research.

But that doesn't mean other developments aren't coming. Oxley said that he could envision a future in which brain-computer interface neural implants do more than just restore the ability to communicate. Though this vision of the future is fairly speculative, it's not hard to imagine that as neural implants — from Synchron or anywhere else — grow increasingly sophisticated, they allow people to do more and more things.

"What's behind paralysis? The intention to move. So we're digitizing intention," said Oxley. "Ultimately, if those signals are really fast, those patients or people are now controlling technologies with a level of superiority may not be possible with a regular human body."

Synchron isn't working on it now, but Oxley said that devices like the Stentrode could feasibly be used someday to control robotic limbs, exoskeletons, or other devices that improve human senses. Before Oxley or anyone else works towards those devices, he said that there's an ethical minefield to navigate.

"When you start building software that controls devices that move — vehicles, robotic limbs, exoskeletons — what we're doing is digitizing intent," said Oxley. "If we can capture intent of the patient, we run our algorithm that spits out intent into mechanical use. Let's say a robotic limb does the wrong thing: it picks up the wrong thing or pushes and hurts someone, who is responsible? It raises a lot of ethical considerations about how this technology moves forward."