The Dark Reason Elon Musk Is Trashing His Own Newest Employees

What is going on with him? 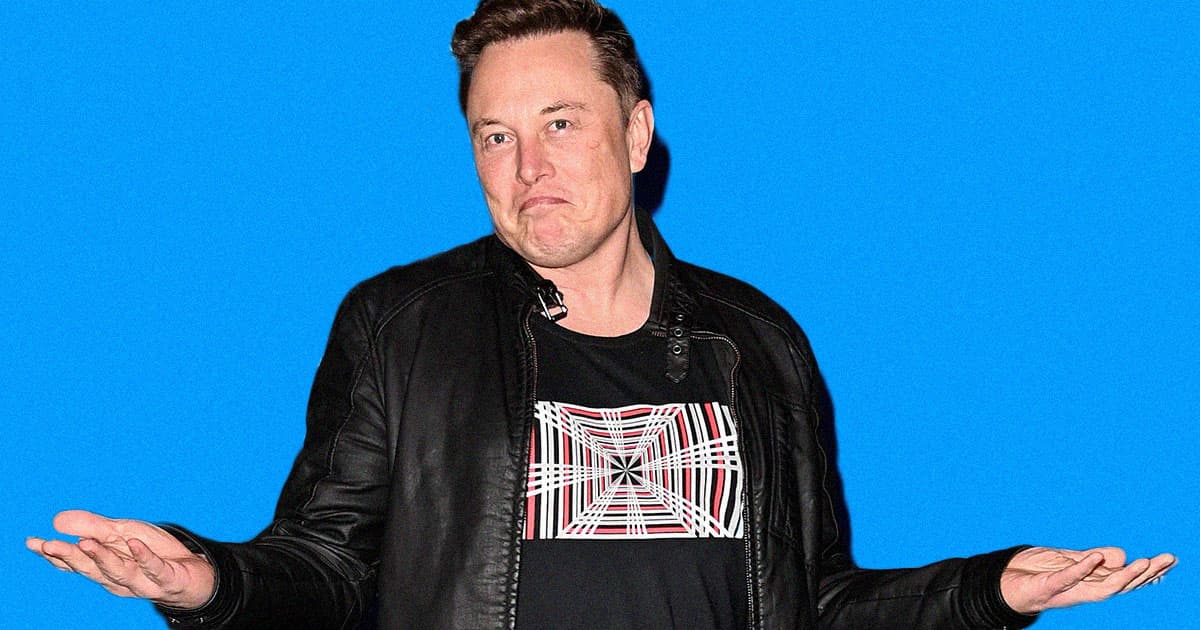 Looks like Tesla CEO Elon Musk, possible new king of Twitter, really has it out for one of the company's top lawyers.

He's insulted her online twice in as many days — even though the purchase contract for his buyout of the social media platform says he's technically not allowed to disparage Twitter.

The billionaire CEO seems to particularly have it out for Vijaya Gadde, a chief legal officer at Twitter, over her role in blocking unfavorable coverage of Hunter Biden — the son of then-presidential candidate Joe Biden — on the platform prior to the election.

Musk said on Tuesday that her choice was "obviously incredibly inappropriate," prompting some to ask why he was breaking his contractual obligation to not disparage Twitter.

On Wednesday, Musk posted a meme that targeted Gadde, seeming to allege that she's either not capable of logic or is deliberately misleading viewers.

In short, it's a pair of incendiary and insulting pieces of commentary that have led some to wonder why he's lashing out at the people running his latest acquisition.

"You're making an executive at the company you just bought the target of harassment and threats," one twitter user said in response.

what's going on? You're making an executive at the company you just bought the target of harassment and threats.

Kara Swisher, famed journalist and popular podcast host, shared her own theory as to why Musk is breaking rules and insulting a Twitter employee.

"He’s trying to goad people into leaving and it’s an odious way of doing it," Swisher argued. "Speaking of which, you can be sure to keep up with the payments he needs to make, there will have to be significant layoffs at twitter. He’d rather they quit, than pay them out."

What’s going on: He’s trying to goad people into leaving and it’s an odious way of doing it. Speaking of which, you can be sure to keep up with the payments he needs to make, there will have to be significant layoffs at twitter. He’d rather they quit, than pay them out. https://t.co/QiRCt2MVmc

Swisher's tweet seems to call out the way Musk financed his newest purchase. Musk will likely have to leverage some of his Tesla shares to come up with the $4 billion — news which has caused Tesla's stock price to plummet.

That reality could also put the entire purchase on thin ice. If the electric car maker drops enough in stock price, Musk might choose not go through with the sale at all.

It could also be read as a warning about the future of free speech on the platform. Musk's aggression towards Gadde could be an attempt to make her leave, thereby increasing the likelihood Twitter sees and allows more hate speech — something the company has been fighting with various degrees of success for several years.

Musk's remarks on free speech during the proposed sale have been met with derision by experts.

"For Twitter to deserve public trust, it must be politically neutral," he tweeted on Wednesday, "which effectively means upsetting the far right and the far left equally."

If the Twitter attacks on Gadde aren't part of a scheme to get out of the contract, it's weird to think Musk has it out for a person he likely rarely, if ever, will come into contact with.

Then again, Musk seems to relish public drama and attention. We may have to wait for final sale details to know why he's lobbing so many insults this week — that is, if we ever get an answer.

Read This Next
I Silence Thee
Leaked Messages Seem to Show Elon Musk Using Twitter to Punish His Enemies
Enemy Mine
Elon Musk Now Denies That His Family's Emerald Mine Existed, In Spite of Previously Bragging About It
Bot Rush
An Overwhelming Number of Porn Bot Accounts "Drowned Out" Chinese Protest Content on Twitter
Hardcore Mode
Even Twitter's Intern Just Resigned in Disappointment
This is Exhausting
Elon Musk Seems to Be Trying to Weasel Out of Vote to Resign
More on Future Society
Primate Theft
8:00 PM on the byte
It Was a Very Bad Weekend for Monkeys Being Stolen From Zoos, Apparently
Ring The Alarm
3:40 PM on the byte
Whistleblower Claims Facebook Can Secretly Drain Your Phone's Battery on Purpose
Gas Giant
Jan 27 on the byte
Journalist Eats Lab-Grown Chicken, Gets "Weirdly Gassy"
READ MORE STORIES ABOUT / Future Society
Keep up.
Subscribe to our daily newsletter to keep in touch with the subjects shaping our future.
+Social+Newsletter
TopicsAbout UsContact Us
Copyright ©, Camden Media Inc All Rights Reserved. See our User Agreement, Privacy Policy and Data Use Policy. The material on this site may not be reproduced, distributed, transmitted, cached or otherwise used, except with prior written permission of Futurism. Articles may contain affiliate links which enable us to share in the revenue of any purchases made.
Fonts by Typekit and Monotype.