"And if it doesn’t work, he’s gonna sue death!" 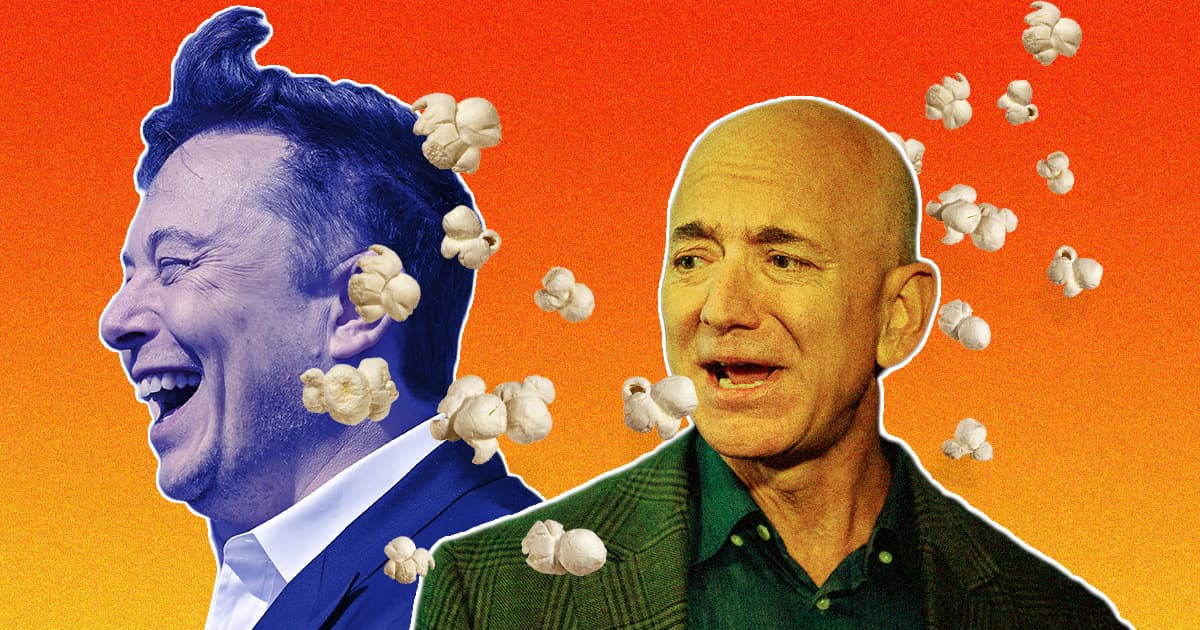 The startup, called Altos Labs, is looking into ways to reverse aging in human cells. That type of work has shown some promise, but is still in its very early stages.

"And if it doesn’t work, he’s gonna sue death!" Musk chided in a characteristically scathing tweet on Tuesday, a jab at Bezos' highly litigious tendencies.

The beef between the two richest men in the world has been stewing for months now — but as far as we can tell, it's the first time Musk has ridiculed Bezos for actions unrelated to space exploration.

The most recent zinger comes as Bezos' efforts to curry favor with NASA and be signed on as a second Human Landing Systems (HLS) contractor in addition to SpaceX are arguably becoming increasingly desperate.

Both space companies — in addition to Alabama-based Dynetics — were competing for funding from the space agency to develop a lunar lander capable of taking US astronauts to the Moon.

But SpaceX emerged as the sole winner, to Bezos' great dismay. Last month, Blue Origin decided to sue NASA over its decision, which led to NASA temporarily pausing the entire program — and Musk mercilessly raking his rival over the coals.

Musk even suggested that SpaceX "zap [Bezos] on the head with our space lasers" last week.

"He should consider spending some money on actual lunar lander hardware, instead of shady lobbyists," Musk suggested in a separate tweet, after news broke that Blue Origin hired former Amazon consultants with ties to a controversial Pentagon contract.

And now, it appears, Musk and Bezos' bickering has breached beyond the topic of space exploration. Musk is out for blood, and not afraid of hitting below the belt.

Where the squabble will end up taking us — and how it will continue affecting NASA's efforts to return astronauts to the Moon — remains to be seen.

But for now, all we can do is grab some popcorn and watch the drama unfold.

Read This Next
Shot Well
Head of NASA Relieved to Hear Elon Musk Isn't REALLY Running SpaceX
Pale Blue Shat
William Shatner Explains Why His Trip to Space Was Horrible
Overview Effect
William Shatner Says His Space Trip Left Him With a Feeling of Terrible Grief
Makeover Scene
Space Tourist Says He's Thinking About Flying SpaceX Craft Up to Fix Hubble
Grain of Salt
There's a Huge Problem With Elon Musk's Promise to Bring Starlink to Iran
More on Off World
Lonely Planet
4:20 PM on futurism
Scientists Find Nearby Planet the Same Size of Earth, Plan to Search It for Life
Take Cover
Yesterday on the byte
Space Startup Blows Up Another Giant Inflatable Space Station Module
Rock Blast
Yesterday on the byte
Scientists Say There's an Upside to Those Rocks That Keep Bludgeoning the James Webb
READ MORE STORIES ABOUT / Off World
Keep up.
Subscribe to our daily newsletter to keep in touch with the subjects shaping our future.
+Social+Newsletter
TopicsAbout UsContact Us
Copyright ©, Camden Media Inc All Rights Reserved. See our User Agreement, Privacy Policy and Data Use Policy. The material on this site may not be reproduced, distributed, transmitted, cached or otherwise used, except with prior written permission of Futurism. Articles may contain affiliate links which enable us to share in the revenue of any purchases made.
Fonts by Typekit and Monotype.