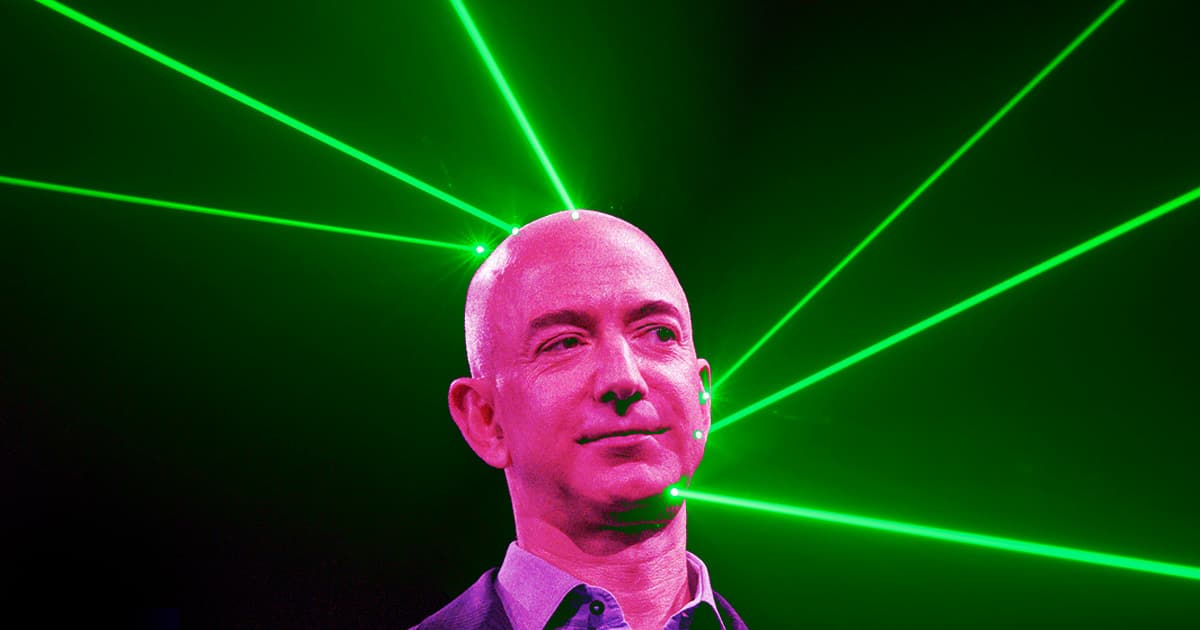 Most recently, Blue Origin took NASA to court over its decision to award its Human Landing Systems (HLS) contract to SpaceX, leaving Blue Origin in the dust.

Today, Ars Technica reported that Blue Origin has the hired advisory firm behind the highly controversial JEDI contract, a $10 billion military cloud computing services contract awarded to Microsoft by the US Department of Defense.

It all seems to be getting under Musk's skin.

"Maybe zap [Bezos] on the head with our space lasers…" the SpaceX CEO suggested today. He was replying to a different Twitter user, who wondered "at what point does Elon Musk have a Falcon Heavy hover over Bezos's house all day?"

Needless to say, if Musk controls any deadly space lasers, they are not publicly documented. The latest generation of SpaceX's Starlink satellites are outfitted with laser terminals to allow them to communicate with each other — but they're definitely not designed to headhunt litigious billionaires.

Musk has repeatedly roasted Bezos on Twitter lately, signaling that the growing spat between two of the richest men in the world isn't letting up. "No amount of money can defy physics," Musk joked over the weekend. "As Jeffrey Besos [sic] is amply demonstrating."

While SpaceX has been hard at work getting its Moon-bound spacecraft off the ground, Blue Origin and Amazon have spent considerable amounts of their resources on slowing down their competitors.

The "shady lobbyists," founding partners of advisory firm Palla Advisors Sally Donnelly and Tony DeMartino, joined Blue Origin in its lawsuit against NASA. Both consulted for Amazon before taking jobs at the Department of Defense, Ars reports.

The controversy arose when competitors in the JEDI contract argued that the pair used their existing influence at the Pentagon to sway the bidding process in favor of Amazon.

Amazon also recently requested that the Federal Communications Commission dismiss SpaceX's amendment plans for its second-generation Starlink constellation, arguing that they were too broad, as SpaceNews reported last week.

In short, Amazon is working on its own broadband constellation called Project Kuiper and it's worried SpaceX will gain too much control over low-Earth orbit or bend the rules too much in its favor — at least according to the e-retail giant.

In a public letter spotted by CNBC space reporter Michael Sheetz today, SpaceX responded to the request, calling it "a continuation of efforts by the Amazon family of companies to hinder competitors."

The letter even referenced the HLS lawsuit against NASA.

"Amazon's maneuvering is familiar to anyone who has watched Amazon or its sister companies," the letter reads, appending a footnote to an Observer article about the ongoing lawsuit delaying NASA and SpaceX's efforts to return astronauts to the Moon.

Read This Next
Shoo
Scientists Warn Giant Asteroid Is Actually Swarm, Nearly Impossible to Destroy
A Sip of Opal
NASA Discovers Precious Gemstones on Mars
Moon Wrestling
The Head of NASA Is Scared Chinese Astronauts Will Seize Portions of the Moon
Shot Well
Head of NASA Relieved to Hear Elon Musk Isn't REALLY Running SpaceX
Pale Blue Shat
William Shatner Explains Why His Trip to Space Was Horrible
More on Off World
Drama Bomb
Yesterday on the byte
European Space Agency Halts Plans to Send Astronauts to Chinese Space Station
Futurism
Yesterday on the byte
Asteroid Mining Startup About to Launch First Mission
Carry On, Wayward...
Yesterday on the byte
NASA Says Lucy Spacecraft Will Forge Ahead With Busted Solar Array
READ MORE STORIES ABOUT / Off World
Keep up.
Subscribe to our daily newsletter to keep in touch with the subjects shaping our future.
+Social+Newsletter
TopicsAbout UsContact Us
Copyright ©, Camden Media Inc All Rights Reserved. See our User Agreement, Privacy Policy and Data Use Policy. The material on this site may not be reproduced, distributed, transmitted, cached or otherwise used, except with prior written permission of Futurism. Articles may contain affiliate links which enable us to share in the revenue of any purchases made.
Fonts by Typekit and Monotype.