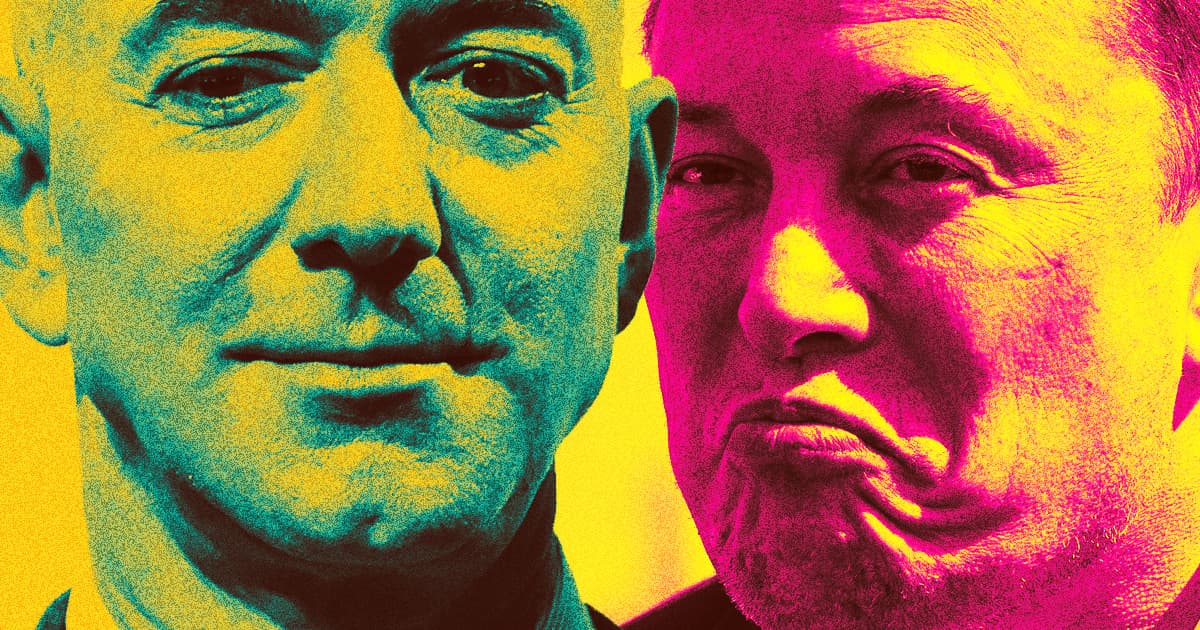 To be fair, Musk has a point.

To be fair, Musk has a point.

Jeff Bezos and Elon Musk are trading barbs once again — in the form of Bezos doing whatever he can to stand in SpaceX’s way and Musk, well, taking shots on Twitter.

“Turns out Besos [that’s Spanish for “kisses,” a dig Musk has used against Bezos before] retired in order to pursue a full-time job filing lawsuits against SpaceX,” Musk tweeted early on Friday morning.

In this case, Musk was responding to the news that the Amazon-owned broadband satellite company Kuiper Systems was trying to get the FCC to prevent SpaceX from launching a second generation of Starlink satellites. As The Verge notes, Musk is only partially wrong: this doesn’t seem to be a formal lawsuit. But the fact remains that Bezos and his various companies seem particularly keen on taking a “if I can’t have it, no one can” approach to space exploration by repeatedly targeting its most prominent competitor with legal obstacles.

Bezos has already become a sizeable thorn in Musk’s side. Earlier this month, Bezos’s space company Blue Origin sued NASA after it awarded SpaceX a Moon lander contract — a move that NASA administrator Bill Nelson later confirmed will definitely delay the entire Moon program. In the words of Bo Burnham, “Jeffrey Bezos: You did it!”

Now, Kuiper Systems has filed a letter of protest with the FCC arguing that SpaceX is taking unfair liberties with its planned launch of about 30,000 second-gen Starlink satellites. SpaceX is legally required to tell the FCC exactly where each of those satellites will be, but the company filed two possible configurations instead, according to The Verge. Kuiper Systems corporate counsel Mariah Dodson Shuman wrote in the letter that asking every other satellite operator to plan ahead for two configurations for tens of thousands of satellites puts an unnecessary and unfair burden on the rest of the industry.

“SpaceX’s novel approach of applying for two mutually exclusive configurations is at odds with both the Commission’s rules and public policy and we urge the Commission to dismiss this amendment,” Shuman wrote.

Musk on the Moon
Could Elon Musk Paint a Giant Picture of His Face on the Moon?
Tuesday
Read More
To All The Haters
SpaceX Opponents Complain About Falling Debris, Fires in FAA Hearing
Tuesday
Read More
Will and Jeff
William Shatner Tried to Tell Jeff Bezos About the Glory of Spaceflight, But Bezos Interrupted Him to Spray Staff With Champagne
Oct 13
Read More