The richest man in the world is making NASA an offer. 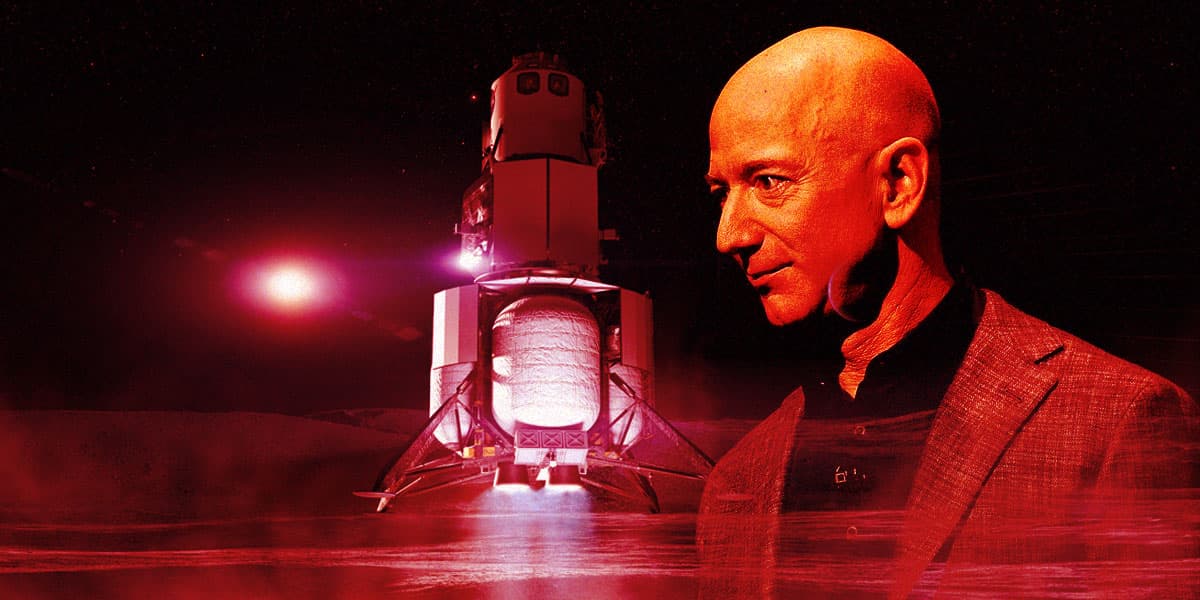 Flying to the near reaches of space wasn't enough for the richest person in the world.

"Blue Origin is committed to building a future where millions of people live and work in space to benefit the Earth," the letter addressed to NASA's Administrator Bill Nelson reads. "We are convinced that, to advance America’s future in space, NASA must now quickly and assuredly return to the Moon."

It's yet another sign that Jeff Bezos is unhappy about his space company playing second fiddle to SpaceX. And now, Bezos is willing to throw his weight — and incredible amounts of wealth — behind his space company's efforts.

NASA's Human Landing System program is core to the agency's collaboration with private space industry companies to get the first astronauts to the Moon as soon as 2024.

Blue Origin, SpaceX, and Alabama-based company Dynetics were all vying for the coveted spot to become the developer of the spacecraft to make that happen.

In a controversial decision in April, however, NASA announced that it had selected SpaceX — and SpaceX only — to develop the human lander, a variant of the company's Starship spacecraft.

The decision was immediately contested by both Blue Origin and Dynetics, which led to the entire $2.9 billion contract with SpaceX getting put on hold in early May.

"NASA invested over half a billion dollars in the National Team in 2020-21, and we performed well," today's letter reads. "The team developed and risk- reduced a safe, mass-efficient design that could achieve a human landing in 2024."

NASA's decision also put "an end to meaningful competition for years to come," according to Bezos.

The reality, of course, is that NASA's hands were tied. The agency was faced with an extremely tight budget.

SpaceX proposed landing on the Moon for just $2.89 billion. Blue Origin asked for $5.99 billion. The agency was struggling to get the HLS contract funded, with Congress repeatedly pulling the purse strings tight.

In fact, Congress approved only $850 million for the program for this year, far less than its request of $3.4 billion. In mid-May, NASA administrator Bill Nelson announced that the agency is requesting more than $11 billion for its Human Landing System (HLS) program, paid out over a number of years and layered on top of NASA’s existing budget.

Bezos' solution is to make Blue Origin's proposal more appealing — at least on paper — by giving out a $2 billion discount.

"This offer is not a deferral, but is an outright and permanent waiver of those payments," the letter reads. "This offer provides time for government appropriation actions to catch up."

After all, being the richest person in the world can buy you tremendous amounts of influence.

"NASA veered from its original dual-source acquisition strategy due to perceived near-term budgetary issues, and this offer removes that obstacle," Bezos argued.

It wasn't Blue Origin's first attempt to warm up lawmakers to the idea of having NASA fund its Moon lander. In May, Blue Origin lobbyists tried to push legislation to greatly expand NASA's HLS budget.

Whether NASA will take up Bezos' offer remains to be seen, but it's not looking likely. Congress will also likely want to have a say in the decision.

"I see this as a positive sign overall, but it should not impact the current awards or strategy," NASA’s former deputy administrator Lori Garver told The Verge, adding that it's unlikely NASA will simply change its mind about the current HLS contract.

"NASA can’t just ‘take offers’ because funding is offered," she added. "There’s absolutely nothing to stop Blue from moving forward with their own money to get in a better position to win something in the next round."

The squabble over which billionaire will get funding from American taxpayers to send astronauts to the Moon is far from over. And Bezos is just arming himself with what's available: copious amounts of money.

Whether that will be enough to convince Congress and NASA is unclear.

More on HLS: NASA Is Asking For an Enormous Amount of Extra Money

Read This Next
Shoo
Scientists Warn Giant Asteroid Is Actually Swarm, Nearly Impossible to Destroy
A Sip of Opal
NASA Discovers Precious Gemstones on Mars
Moon Wrestling
The Head of NASA Is Scared Chinese Astronauts Will Seize Portions of the Moon
Shot Well
Head of NASA Relieved to Hear Elon Musk Isn't REALLY Running SpaceX
Pale Blue Shat
William Shatner Explains Why His Trip to Space Was Horrible
More on Off World
Trashing Orbit
Yesterday on the byte
Elon Musk Says SpaceX May Build Starship That Dies on Purpose
Cat and Mouse
Yesterday on the byte
SpaceX to Launch "Hunter" Satellites for Targeting Rival Spacecraft
Space In Space
Yesterday on the byte
NASA Official Admits There's a Bit of an Issue on the Space Station
READ MORE STORIES ABOUT / Off World
Keep up.
Subscribe to our daily newsletter to keep in touch with the subjects shaping our future.
+Social+Newsletter
TopicsAbout UsContact Us
Copyright ©, Camden Media Inc All Rights Reserved. See our User Agreement, Privacy Policy and Data Use Policy. The material on this site may not be reproduced, distributed, transmitted, cached or otherwise used, except with prior written permission of Futurism. Articles may contain affiliate links which enable us to share in the revenue of any purchases made.
Fonts by Typekit and Monotype.