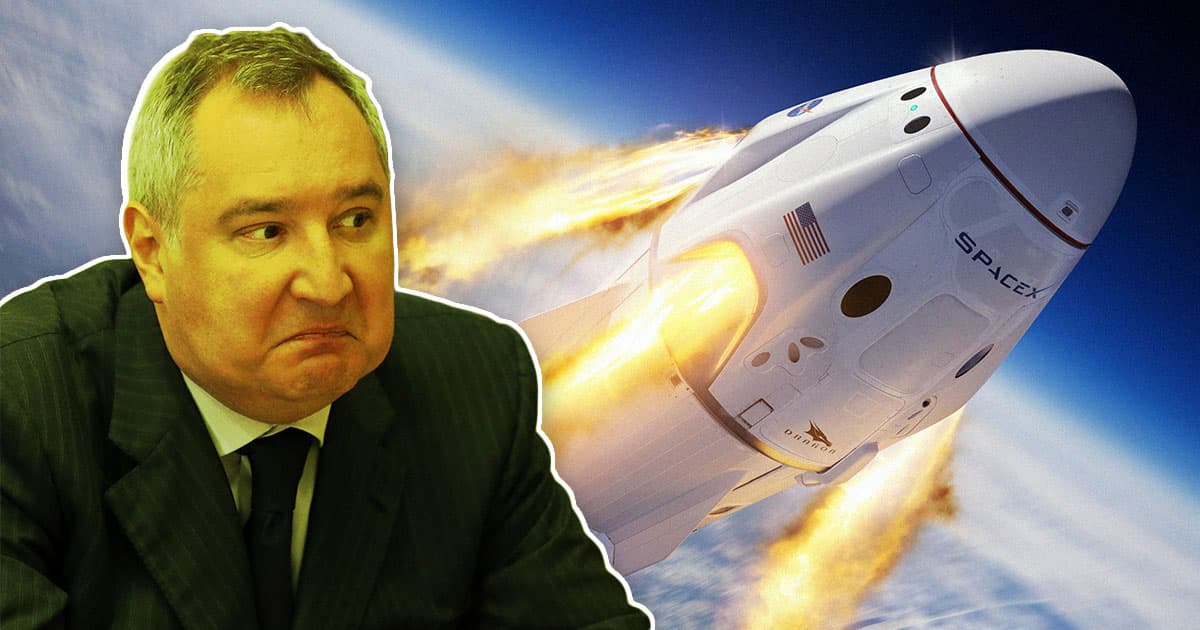 Russian space chief Dmitry Rogozin is at it again.

This time, he's conveniently bending reality to impress Chinese officials and convince them to help Russia with its space program, which has been largely cut off from international support following Russia's invasion of Ukraine.

In an interview with Chinese state media network CGTN, Rogozin argued that Russia's role in the International Space Station "is vital. Only Russia's Soyuz spacecraft can transport American, European, Canadian, Japanese astronauts and their guests."

"Soyuz is irreplaceable, because America doesn't have any spacecraft," he added.

It's yet another bizarre comment from the outspoken space chief, who is obviously aware that the claim is demonstrably false. In fact, in October, Rogozin himself suggested Russian cosmonauts could soon be launching on SpaceX Crew Dragon spacecraft to the ISS.

"In our view, SpaceX has already acquired enough experience for us to be able to put our cosmonauts on Crew Dragon," Rogozin said through a translator at the time.

It's especially ironic given the fact that astronauts from Europe, the US and Japan have all already launched on board a Crew Dragon to the ISS, with Canada being the only exception on Rogozin's list.

Sure, Crew Dragon may not have been developed in-house by NASA, but SpaceX is an American company that built the spacecraft with considerable NASA funding as part of its Commercial Crew Program.

In other words, Crew Dragon is the culmination of years of tightknit collaboration between the two.

Rogozin also claimed that the ISS was doomed without Russia after being asked about threatening the US with a rapidly de-orbiting ISS in February.

"Russia helps the international space station avoid space rubbish and maintain orbital correction," he told CGTN. "The ISS is in a low earth orbit. It helps deliver fuels to the station. These are the main contributions from Russia and Roscomos in particular."

In the interview, Rogozin also said that Russia would be interested in working with China on launching a Mars rover, after the European Space Agency announced it is no longer planning on launching its ExoMars rover this year, since it was planning to do so using a Russian-made Proton rocket.

Predictably, Rogozin condemned the international community for implementing "illegal" sanctions against its space program, once again painting Russia as the victim.

In fact, the space chief went so far as to throw the ESA completely under the bus.

"In the construction of ExoMars, the main element is the landing module," he said in the interview. "The Mars research rover is not the essential element. I think we can make this mission happen with another partner like China or someone else."

It's not a stretch to conclude that Rogozin is acting in bad faith. One can only hope his comments are not reflective of Roscosmos' outlook as a whole — after all, years of hard work by Russian scientists and engineers are at stake.

The ball is now in China's court. The two countries have shown willingness to work together before, and are already collaborating on a planned lunar base.

But given the current geopolitical crisis and the subsequent fallout in international relations, China may be thinking twice about taking Rogozin up on his offer.

Read This Next
Don't Let the Door Hit You
Russian Space Chief Leaving Post, May Be Headed to War Zone
Gone Girl
Rumors Swirl That the Deranged Head of the Russian Space Program Is Getting Fired
Scheming Dmitry
Former NASA Official Says Russian Space Head Is Trapped, Trying to Escape
Futurism
NASA Explains What Would Happen If Russia Abandoned the Space Station
Muzzled Up
Former Astronaut Says NASA Warned Him to Stop Criticizing Russia
More on Off World
Grrrrrrrr
4:06 PM on the byte
Internet Erupts as NASA Spots Cartoon Bear on Surface of Mars
Gl1tc4
2:44 PM on the byte
NASA Says Another James Webb Instrument Has Suffered a Glitch
comet Spotting
2:06 PM on the byte
Behold! Dazzling Green Comet Approaches
READ MORE STORIES ABOUT / Off World
Keep up.
Subscribe to our daily newsletter to keep in touch with the subjects shaping our future.
+Social+Newsletter
TopicsAbout UsContact Us
Copyright ©, Camden Media Inc All Rights Reserved. See our User Agreement, Privacy Policy and Data Use Policy. The material on this site may not be reproduced, distributed, transmitted, cached or otherwise used, except with prior written permission of Futurism. Articles may contain affiliate links which enable us to share in the revenue of any purchases made.
Fonts by Typekit and Monotype.