Is his time finally up? 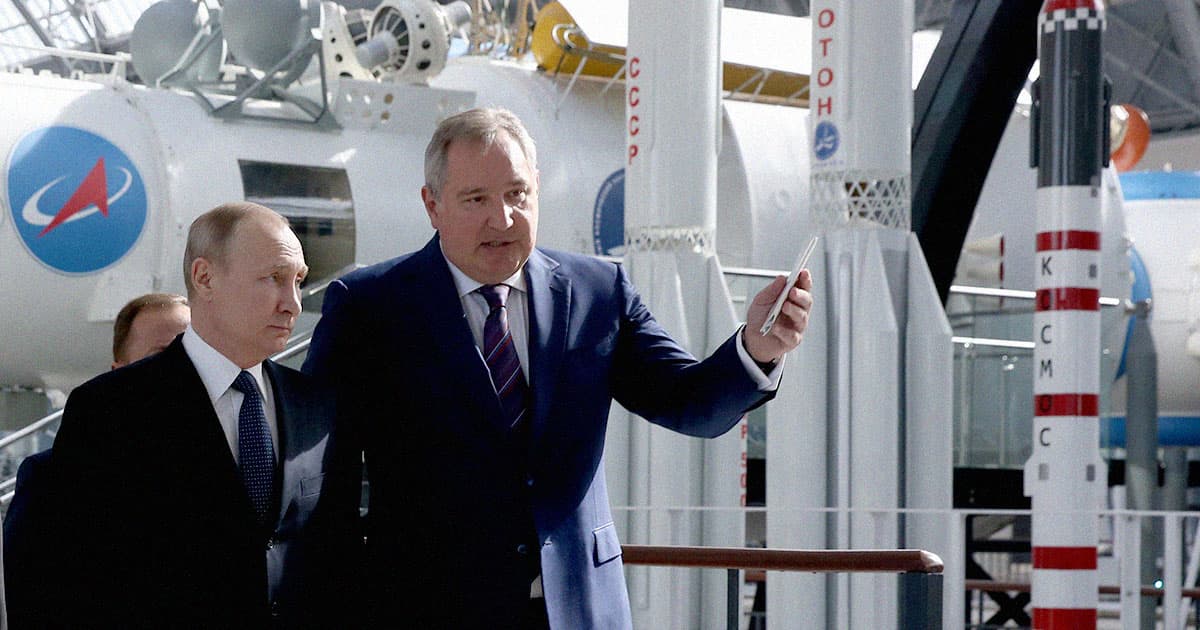 Rumors are swirling yet again that Dmitri Rogozin, the extremely controversial head of Russia's space corporation Roscosmos, could soon be fired from his position.

According to reports posted to Telegram and spotted by Ars Technica senior space editor Eric Berger, Rogozin could soon be out of the job and be replaced by deputy prime minister Yury Borisov.

The reports are mostly speculation at this point. Official government sources have yet to publicly comment.

But Rogozin is certainly a plausible candidate for turnover. Though he's a notable figure in president Vladimir Putin's "inner circle," he's has garnered a reputation for making rash and provocative statements, even threatening the US on a number of occasions, particularly since Russia invaded Ukraine.

Provocations between members of the international space community have been exceedingly rare, even during the depths of the Cold War. And on a practical level, Rogozin's reckless comments certainly haven't helped as international partners distanced themselves from collaborating with the Russian space program in the wake of the invasion.

The news also comes after NASA decried Russia for  for spreading anti-Ukraine propaganda on board the ISS last week.

In short, Russia's space program finds itself increasingly cut off from the world, and Rogozin is in large part to blame.

"Rogozin has done incredible damage to the Russian civil space industry, and been increasingly belligerent in his relationship with Western space powers," Berger wrote. "Whether he's able to bounce back from this, who knows?"

It's hard what to make of the new reports, though, as it's far from the first time such rumors have surfaced.

"Such rumors appear twice a year since Rogozin became the head of Roscosmos," Moscow-based space reporter Katya Pavlushchenko tweeted. "Of course one day it will happen, but I'm not sure why we should believe these rumors this time."

Pavlushchenko did, however, add that "I must admit that this time the rumors are very 'loud,'" linking to a separate news source corroborating the buzz.

According to the report she pointed to, published by Russian news site Meduza, Rogozin could actually be looking at a promotion, possibly going on to work in the presidential administration of the Russian Federation.

According to Meduza's sources close to the Kremlin, Rogozin could soon become the assistant to the president, putting him even closer in proximity to Putin.

Putin has reportedly met with Rogozin twice since the war started, with the two getting along well.

After all, Rogozin's flavor of brash nationalism is bound to impress a leader who led the unprovoked invasion of a neighboring country.

"[Rogozin] loves shocking and scandalous activity," one of Meduza's sources said, as translated by Google. "He understands that the president likes this kind of behavior, and he plays on it."

The timing is unfortunate, with NASA still planning to go ahead with a planned astronaut seat swap, allowing Russian cosmonaut Anna Kikina to travel to the International Space Station on board a SpaceX Crew Dragon spacecraft in September.

An official decision still has yet to be made with regards to the seat swap, but given Russia's inflammatory rhetoric, the future of collaboration on board the space station is more uncertain than ever.

More on the drama: Russia Forced to Dodge Space Debris From When It Blew Up Satellite

Read This Next
Don't let the door hit you
Elon Musk Lobs Casual Space Station Burn at Moscow
Sad ROSS
Russia's New Space Station Gets Sadder the More We Hear About It
Buh Bye
Russia Says It's Definitely Quitting the ISS But Doesn't Say When Exactly
Don't Let the Door Hit You
Russian Space Chief Leaving Post, May Be Headed to War Zone
Virts Ramp
Former NASA Astronaut Says America Should Cut Russia Loose on the Space Station
More on Off World
Space Grow
Yesterday on the byte
Plans Announced for Full Greenhouse on International Space Station
Not Good
Monday on the byte
Mars Astronauts Would Get Horrifying Dose of Radiation, Study Finds
Under the Sea
Aug 13 on the byte
Harvard Professor Trying to Recover Alleged Alien Tech From Ocean
READ MORE STORIES ABOUT / Off World
Keep up.
Subscribe to our daily newsletter to keep in touch with the subjects shaping our future.
+Social+Newsletter
TopicsAbout UsContact Us
Copyright ©, Camden Media Inc All Rights Reserved. See our User Agreement, Privacy Policy and Data Use Policy. The material on this site may not be reproduced, distributed, transmitted, cached or otherwise used, except with prior written permission of Futurism. Fonts by Typekit and Monotype.