Well, if it isn't the consequences of my actions. 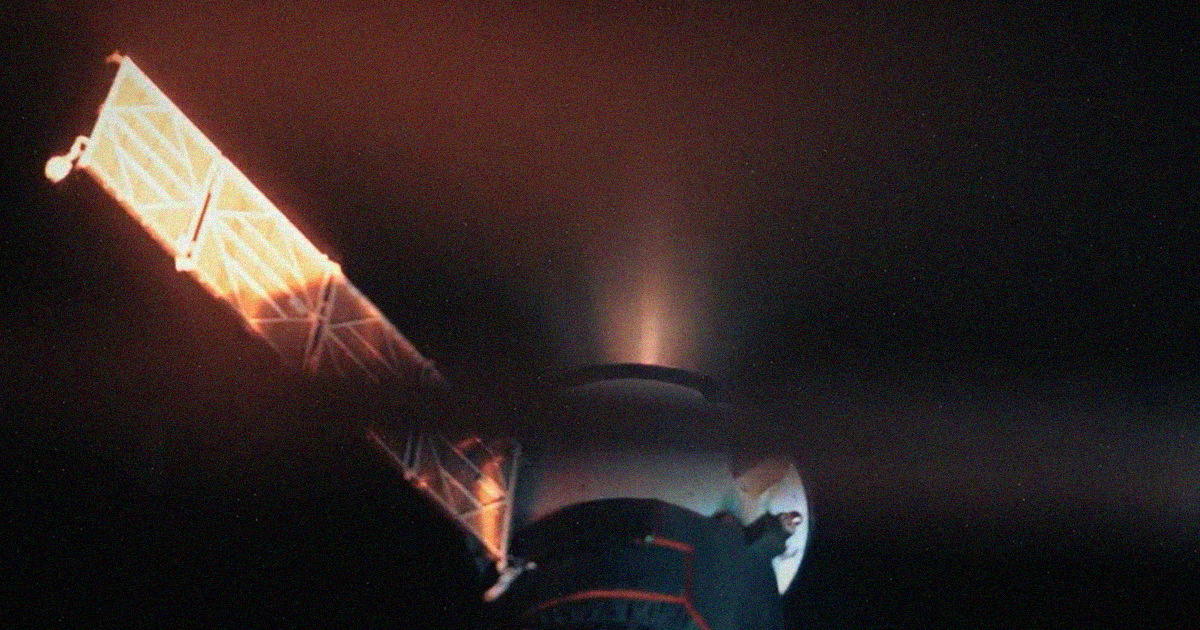 Well, if it isn't the consequences of my actions.

Last night, a Russian cargo spacecraft had to perform an unplanned engine burn to avoid debris left behind by a Soviet Union-era satellite — which a Russian anti-satellite missile blew up into tiny pieces last year.

The Progress MS-20 shuttle launched from the Baikonur Cosmodrome on June 3 to send supplies to the International Space Station. But while it was there, the spacecraft had to conduct "an unscheduled maneuver," according a Telegram update by Roscosmos head Dmitry Rogozin.

At 19:03 UTS, #ProgressMS20 performed an unplanned engine burn to avoid a space debris created by #Kosmos1408. Here’s a video by Roscosmos: https://t.co/WvH1SCPC9c pic.twitter.com/yHPymtzqgm

Interestingly, Rogozin singles out the Kosmos-1408 spacecraft, a satellite launched and operated by the Soviet Union in the early 1980s, as being the reason why Progress had to fire its thrusters, a rare and direct acknowledgement Russian space debris was to blame.

"I should mention that this is a first time when Roscosmos confirmed that the debris is their fault," space reporter Katya Pavlushchenko wrote. "Usually, they say which satellite or rocket stage it was only it if it was a foreign one. If it was Russian, they called it 'space debris.'"

Just like the US, Russia has been a major source of space debris over the decades. But in particular, the country's highly controversial anti-satellite missile test last year — the reason why Progress had to perform the maneuver in the first place — has renewed international calls to come up with ways to mitigate a growing space junk crisis.

At the time, US secretary of state Anthony Blinken called Russia out for having "recklessly conducted a destructive test of a direct-ascent anti-satellite missile against one of its own satellites."

NASA administrator Bill Nelson also called it an "unconscionable action" that could "endanger not only the American and international partner astronauts on the ISS, but also their own cosmonauts. Their actions are both reckless and dangerous."

Russian officials, however, claimed the missile "hit the hold satellite with surgical precision," and said that the fragments wouldn't pose a threat to astronauts "due to the timing of the test," according to a CBS News report at the time.

Seems like that didn't work out too well, judging by this latest maneuver.

And the stakes are very real. Scientists have long warned that a chain reaction of colliding space debris could cascade into a catastrophe, otherwise known as the Kessler Syndrome.

In other words, space debris is a ticking time bomb. As the latest instance goes to show, our presence in orbit is already being significantly impacted by potentially dangerous pieces of manmade objects.

Russia is reaping what it sowed, given the fact that it had to dodge out of the way of a debris field of its own creation.

But it's not just Russia that has to contend with a littered orbit. No spacefaring nation is safe from the threat — which could have long lasting impacts on our efforts to explore outer space.

More on the anti-satellite test: US Agencies, Military Rush to Condemn Russia Blowing Up Satellite

Read This Next
Ice Ice Baby
Check Out This Moon-Shaped Ice Crystal on the Space Station's Window
Scheming Dmitry
Former NASA Official Says Russian Space Head Is Trapped, Trying to Escape
Shuttling Russians
NASA Deciding Whether Russian Cosmonaut Is Allowed on SpaceX Launch
Moon Dudes
Putin Says Russia Is Landing on the Moon This Year
Futurism
NASA Astronaut Says He Candidly Discussed Ukraine Invasion With Cosmonauts
More on Off World
Going Down
Jun 25 on the byte
Scientists Say the Sun Is Acting Up and Causing Satellites to Fall Back to Earth
Target Practice
Jun 24 on the byte
NASA Spots Location Where Derelict Rocket Smashed Into the Moon
Fly Already
Jun 24 on the byte
SpaceX Finally Lifts Super Heavy Booster Using Giant Robot Arms
READ MORE STORIES ABOUT / Off World
Keep up.
Subscribe to our daily newsletter to keep in touch with the subjects shaping our future.
+Social+Newsletter
TopicsAbout UsContact Us
Copyright ©, Camden Media Inc All Rights Reserved. See our User Agreement, Privacy Policy and Data Use Policy. The material on this site may not be reproduced, distributed, transmitted, cached or otherwise used, except with prior written permission of Futurism. Fonts by Typekit and Monotype.