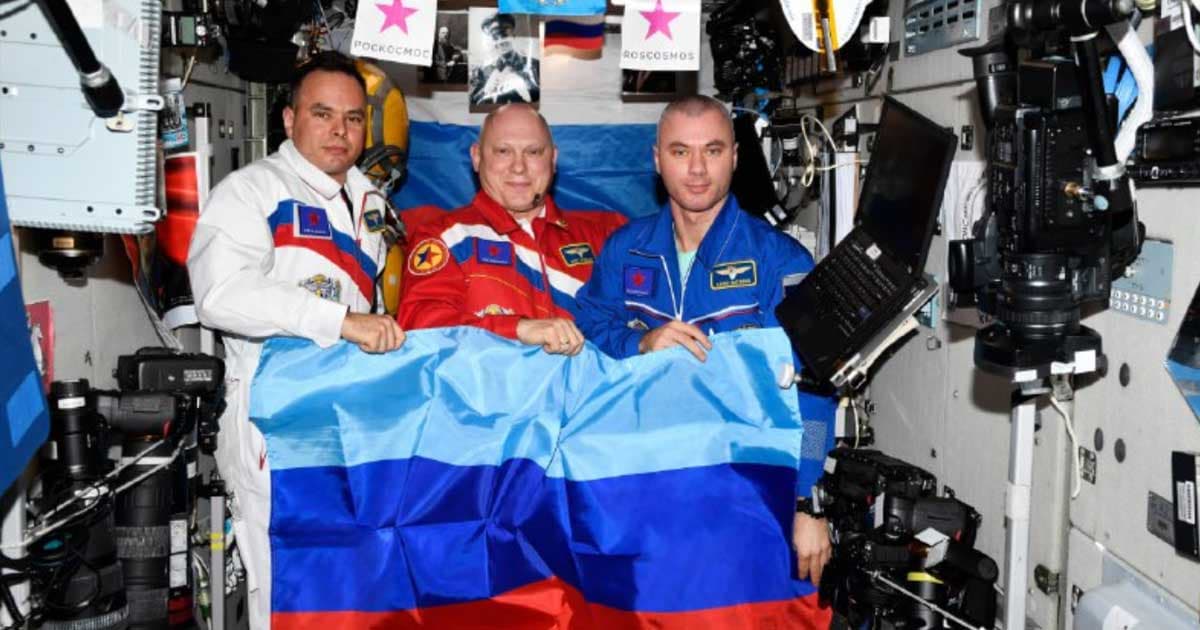 Russia is using the International Space Station to spread anti-Ukraine propaganda, Ars Technica reports — an unfortunate turn of events after months of largely peaceful operations on board the orbital outpost despite the crisis unfolding back on the ground.

In an image shared on Russian space corporation Roscosmos' official Telegram channel, three cosmonauts can be seen holding the flags of the Luhansk People's Republic and the Donetsk People's Republic, two eastern regions of Ukraine that the Russian federation recognizes as independent.

The United Nations, however, does not recognize these two "republics," as Ars points out. Ukraine still designates both as terrorist organizations. In other words, it's a space photo op with a clear anti-Ukraine message as the two nations do battle down on Earth.

The Russian invasion has exacerbated those skirmishes, with Russia claiming on Sunday that it had officially seized control over the Luhansk region.

"This is a long-awaited day that residents of the occupied areas of the Luhansk region have been waiting for eight years," the Telegram message reads. "We are confident that July 3, 2022, will forever go down in the history of the republic."

Despite the provocation, NASA says there's no need for any escalation.

"Both countries are needed for operations, the Russians for propulsion, the Americans for power," NASA administrator Bill Nelson told German magazine Der Spiegel on Monday. "We will continue to have a very professional relationship between cosmonauts and astronauts to keep this station alive."

The timing is awkward. Russian cosmonaut Anna Kikina is scheduled to launch to the station on board an American SpaceX Crew Dragon spacecraft on September 1, though the swap has yet to be officially ratified by either country, according to Ars.

It's still unclear if the stunt will end up affecting operations in any real way. But using the space station as a wartime cudgel a notable breach of trust that should give international collaborators pause yet again.

Don't let the door hit you
Elon Musk Lobs Casual Space Station Burn at Moscow
Jul 28
Read More
Sad ROSS
Russia's New Space Station Gets Sadder the More We Hear About It
Jul 27
Read More
Buh Bye
Russia Says It's Definitely Quitting the ISS But Doesn't Say When Exactly
Jul 26
Read More
+Social+Newsletter
TopicsAbout UsContact Us
Copyright ©, Camden Media Inc All Rights Reserved. See our User Agreement, Privacy Policy and Data Use Policy. The material on this site may not be reproduced, distributed, transmitted, cached or otherwise used, except with prior written permission of Futurism. Fonts by Typekit and Monotype.