Russia Mocked SpaceX. Now It's Reserved a Seat for a Cosmonaut

SpaceX's Crew Dragon is too good of a deal to pass on. 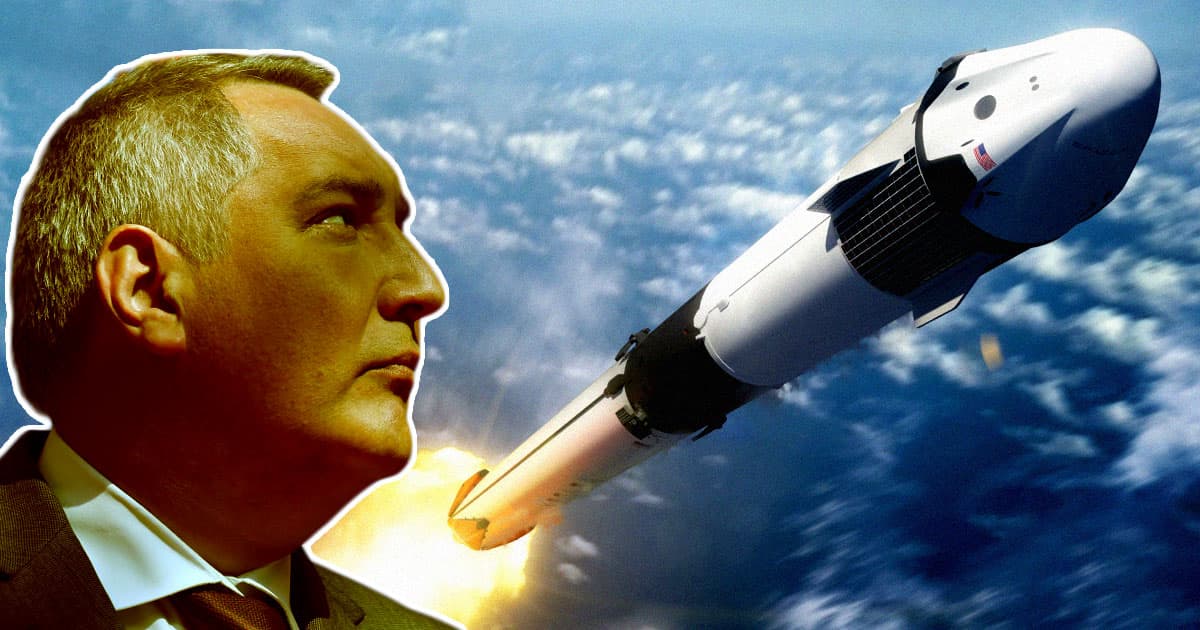 After years of snide remarks, mockery, and even thinly-veiled threats, Russia is ready to make peace with SpaceX.

In fact, Dmitry Rogozin, the bumbling head of the country's space agency Roscosmos, announced on Twitter today that Russia will send cosmonaut Anna Kikina to the International Space Station late next year on board a SpaceX Crew Dragon capsule — rather than one of the country's own Soyuz spacecraft.

The arrangement is part of a seat barter agreement, senior SpaceNews writer Jeff Foust pointed out, with a NASA astronaut making the trip on board a Soyuz some time next year as well.

For years, Rogozin and SpaceX CEO Elon Musk have butted heads. But as of late, Rogozin's actions indicate that the two appear to have buried the hatchet. In other words, NASA, SpaceX, and Russia are ready to collaborate on sending humans into orbit — and that bodes well for the future of space exploration.

"In our view, SpaceX has already acquired enough experience for us to be able to put our cosmonauts on Crew Dragon," Rogozin said through a translator at a press conference in October.

SpaceX has completed several crewed missions to the ISS over the last couple of years, demonstrating its Crew Dragon capsule is ready for primetime.

Will it ever replace Russia's workhorse, the Soyuz? In the short term, that's looking unlikely.

The spacecraft has been used since the late 1960s to ferry astronauts into space. While Roscosmos has made several changes to the capsule's technology over the decades, the basic design remains the same.

The seat barter goes to show that international collaboration can be mutually beneficial, and the continued existence of the ISS is the ultimate proof.

Read This Next
Rolling Coal
Space Travel Will Absolutely Gut the Environment, Scientists Warn
Duck and Roll
Russia Forced to Dodge Space Debris From When It Blew Up Satellite
Futurism
Free Speech Champion Elon Musk Fires Employees for Criticizing Him
NDA
SpaceX Reportedly Paid $250,000 to Silence Sexual Allegations Against Elon Musk
Scheming Dmitry
Former NASA Official Says Russian Space Head Is Trapped, Trying to Escape
More on Off World
TMNT
Friday on the byte
Chunky Turtle Spotted Near NASA's Mega Moon Rocket
Cloud Spotting
Thursday on the byte
NASA Needs Your Help Spotting Clouds On Mars
Carbon-Based
Tuesday on futurism
NASA Rover Finds New Potential Evidence for Ancient Life on Mars
READ MORE STORIES ABOUT / Off World
Keep up.
Subscribe to our daily newsletter to keep in touch with the subjects shaping our future.
+Social+Newsletter
TopicsAbout UsContact Us
Copyright ©, Camden Media Inc All Rights Reserved. See our User Agreement, Privacy Policy and Data Use Policy. The material on this site may not be reproduced, distributed, transmitted, cached or otherwise used, except with prior written permission of Futurism. Fonts by Typekit and Monotype.