Was that a direct threat aimed at a journalist? 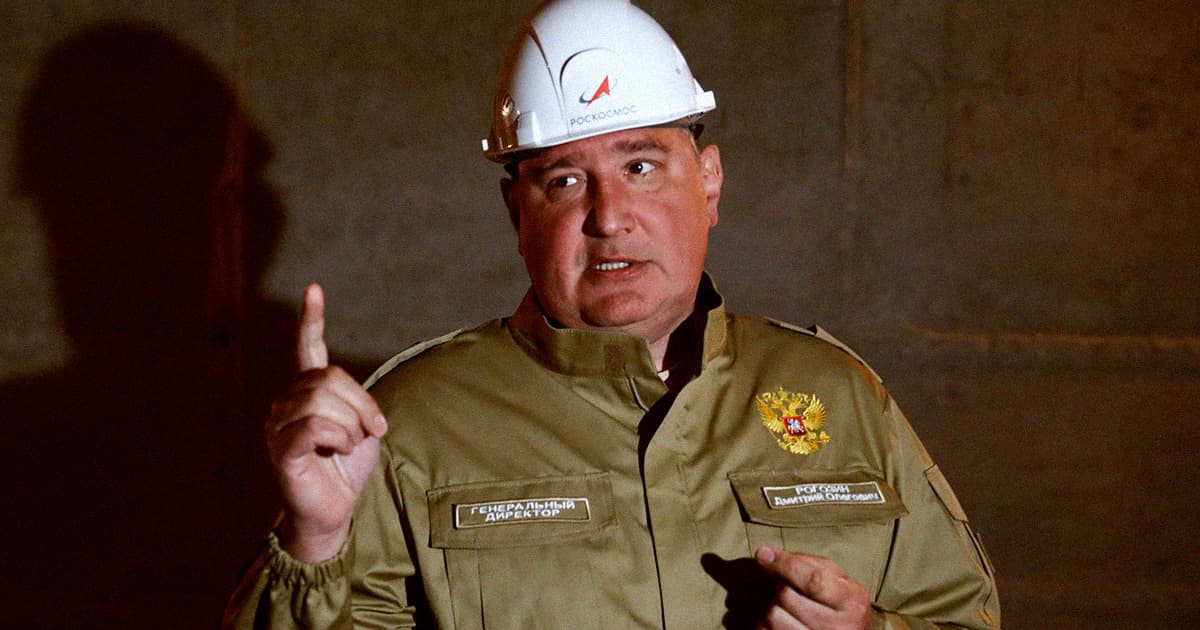 It's no secret that Russia's space agency head Dmitry Rogozin is a bit of a character.

From offering SpaceX CEO Elon Musk a cup of tea earlier this month to calling Venus a "Russian planet," or likening the country's Soyuz rocket to a Kalashnikov, Rogozin isn't afraid to speak his mind.

Today, Rogozin is back at it — and this time, he stirred the pot by calling mild-mannered Ars Technica senior space reporter Eric Berger a war criminal. Yes, seriously.

Here's what went down. First, Berger wrote a story speculating about why Rogozin might be so persistent in his requests for Musk to visit him at home.

The space chief invited Musk to his home "to be a guest of my family," according to an extremely rare CNN interview on September 7, to discuss anything from "exploring the universe" to "extraterrestrial life."

In short, Berger argued in his piece that the space chief desperately wants Russia's plans to shoot a movie on board the International Space Station to be a success.

Rogozin wants Musk to "attract the glitz and attention Rogozin so desperately craves as he seeks to craft an image of the Russian space program that is more Hollywood than Potemkin village," Berger wrote.

Besides, Berger notes that Russian operatives have poisoned at least one of their adversaries using tea before — making his offer to Musk all the more ominous.

So grab the popcorn, because the tweets got pretty spicy.

"Only a poisoned soul can be worse than polonium," Rogozin shot back at Berger, referring to a substance infamously used to poison Alexander Litvinenko, a former KGB officer who fled to the UK in 2000.

Was that a threat? Rogozin doesn't seem to think so.

"First learn English, then you will be clever," Rogozin replied in Russian to a Twitter user who pointed out that a government official may have just aimed a direct threat at a US journalist.

Even more strangely, Rogozin also tweeted that "it is strange that no sanctions were imposed against you for your invasion of Afghanistan and Iraq and the destruction of Libya," after Berger pointed out Rogozin wasn't able to travel to meet Musk at SpaceX's facilities in Texas due to US sanctions over the Russian invasion of Crimea.

In other words, Rogozin appears to have accused an American journalist of invading Afghanistan and Iraq. Needless to say, we're not aware of Berger ever having invaded either country.

"Propaganda journalists bear no less responsibility than politicians," Rogozin shot back after another Twitter user pointed out that high ranking Russian government officials may be more responsible for invading foreign countries than mere journalists.

"He writes not about space technology, but about space politics," a fuming Rogozin wrote in Russian. "Read his articles. Typical American propagandist."

The space community reacted with bemusement and mild alarm.

"Nothing to see here, just very normal tweets from the head of the Russian space agency," freelance space journalist Jonathan O'Callaghan chimed in.

To be clear, making thinly veiled threats at journalists is a serious matter. With accusations flying on Twitter, it's hard to comprehend why a man of Rogozin's rank would wade into the debate.

One thing's for sure: watching these disputes unfurl on the platform is entertaining as hell.

When asked whether Berger is on Rogozin's reading list, the official replied: "not anymore."

Read This Next
Sabers Rattled
Russia Issues Veiled Threat to Shoot Down Pesky SpaceX Satellites
Sad ROSS
Russia's New Space Station Gets Sadder the More We Hear About It
Buh Bye
Russia Says It's Definitely Quitting the ISS But Doesn't Say When Exactly
Don't Let the Door Hit You
Russian Space Chief Leaving Post, May Be Headed to War Zone
Gone Girl
Rumors Swirl That the Deranged Head of the Russian Space Program Is Getting Fired
More on Off World
Final Selection
Yesterday on the byte
NASA Finalizing Secretive Decision on First Astronauts for the Artemis Moon Mission
Hall Effect
Jan 29 on futurism
Test Suggests Ion Thrusters Could Power Crewed Interplanetary Missions
CHON: Legacy
Jan 29 on the byte
James Webb Discovers Coldest Ice in Known Universe, Harboring Molecules Essential For Life
READ MORE STORIES ABOUT / Off World
Keep up.
Subscribe to our daily newsletter to keep in touch with the subjects shaping our future.
+Social+Newsletter
TopicsAbout UsContact Us
Copyright ©, Camden Media Inc All Rights Reserved. See our User Agreement, Privacy Policy and Data Use Policy. The material on this site may not be reproduced, distributed, transmitted, cached or otherwise used, except with prior written permission of Futurism. Articles may contain affiliate links which enable us to share in the revenue of any purchases made.
Fonts by Typekit and Monotype.