Russia Is Furious, Saying the US is Mocking Its Space Program

SpaceX's success has enraged the head of Russia's space program — and he sounds like he's going to blow a gasket. 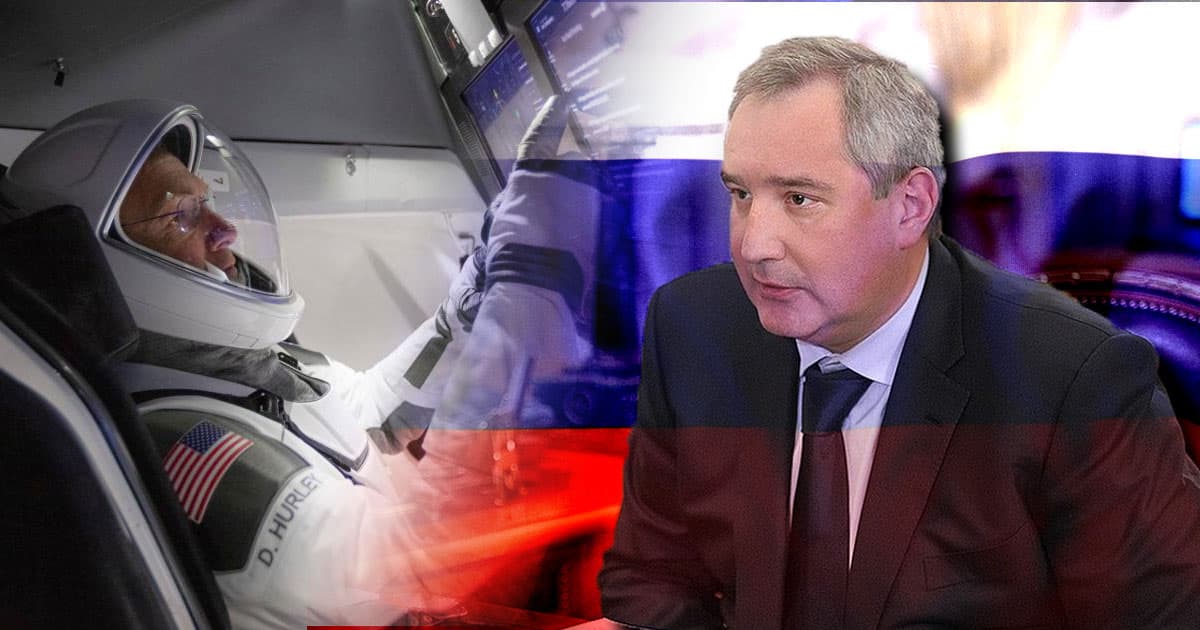 Back in 2014, Roscosmos chief Dmitry Rogozin quipped that without Russia, the US might as well "deliver its astronauts to the ISS by using a trampoline" — a reference to how the US had to rely on Russian spacecraft to launch astronauts into space since 2011.

Six years later, SpaceX successfully sent two NASA astronauts into orbit from American soil. "The trampoline is working," Musk clapped back at a press conference just hours after the launch. "It's an inside joke."

Fuming, Rogozin aired his frustration Monday in a lengthy column for the Russian edition of Forbes.

"When our partners finally managed to conduct a successful test on their spacecraft, there were nothing but jokes and mockery directed at us," Rogozin protested, as translated by Reuters.

"Our country was the first to send a man into space," Rogozin boasted. "We remain first to this day."

Ever since the retirement of NASA's Space Shuttle in 2011, the US had to rely on sending astronauts to the space station aboard Russian Soyuz rockets. It was a costly endeavor, with tickets per seat costing in the neighborhood of $90 million.

SpaceX is planning to cut that down to just $55 million, in large part thanks to its reusable rocket and spacecraft designs — but to Rogozin, that discount is a "price dumping" scheme, an economic term referring to the controversial act of selling a good at a much lower than perceived price, with the intent of stamping out the competition.

The SpaceX tickets are so cheap, in fact, that NASA is expecting that "cosmonauts will fly on Crew Dragon and Boeing Starliner and vice versa," according to NASA spokesperson Stephanie Schierholz, who spoke with Forbes last week — a claim singled out by Rogozin.

To Rogozin, it's a confusion of the cost of launch and the price of the launch service, the latter of which is determined by the market. According to him, the cost of launching a Soyuz is lower than Crew Dragon and other American spacecraft such as Boeing's Starliner (which has yet to go to space).

On the topic of the Soyuz, Rogozin also raged at NASA and SpaceX's lack of enthusiasm for Russia's ongoing efforts. In the column, Rogozin fumed that NASA should be happy for Russia taking the "colossal moral burden" to preserve the life of the International Space Station for nine years.

"Just as the paintings of Leonardo da Vinci, Michelangelo, Titian have no price, because they are unique and are the property of mankind," Rogozin argued, as translated by Google, "so is Russia giving the Americans the opportunity to preserve the ability to deliver astronauts to the space station."

The country is planning to put its best foot forward, he says.

"We have a long and continuous national space transport system, we are constantly improving it, while making a new, even more perfect spacecraft," Rogozin added, arguing that Russia's Soyuz rockets have a better safety and reliability track record than American spacecraft.

He even likened the Soyuz rocket to "our 'Kalashnikov'" — referring to a line of Russian rifles famed for their reliability even after more modern options arose over time.

For one, he mentioned the development of an "eco-friendly" launch vehicle called Angara, a next-gen Soyuz-5 rocket with two stages, and a reusable methane-based rocket system. He also reiterated that Roscomos is planning to launch a lunar landing mission in the upcoming years.

Read This Next
Makeover Scene
Space Tourist Says He's Thinking About Flying SpaceX Craft Up to Fix Hubble
Grain of Salt
There's a Huge Problem With Elon Musk's Promise to Bring Starlink to Iran
Sluggo Mode
SpaceX Has a Major Problem With Its Starlink Internet Connections
Sabers Rattled
Russia Issues Veiled Threat to Shoot Down Pesky SpaceX Satellites
Dumpster Fire
SpaceX Tested Starship's Engines and Accidentally Caused a Large Fire
More on Off World
Cubesat Death
Yesterday on the byte
Another Satellite Released by NASA's Artemis I Just Croaked
Kilonova Blast
Yesterday on futurism
Staggering Galactic Explosion Blamed on Black Hole Collision
Little Boxes
Yesterday on futurism
One Silly Little Detail Is Reportedly Delaying Artemis II by Years
READ MORE STORIES ABOUT / Off World
Keep up.
Subscribe to our daily newsletter to keep in touch with the subjects shaping our future.
+Social+Newsletter
TopicsAbout UsContact Us
Copyright ©, Camden Media Inc All Rights Reserved. See our User Agreement, Privacy Policy and Data Use Policy. The material on this site may not be reproduced, distributed, transmitted, cached or otherwise used, except with prior written permission of Futurism. Articles may contain affiliate links which enable us to share in the revenue of any purchases made.
Fonts by Typekit and Monotype.