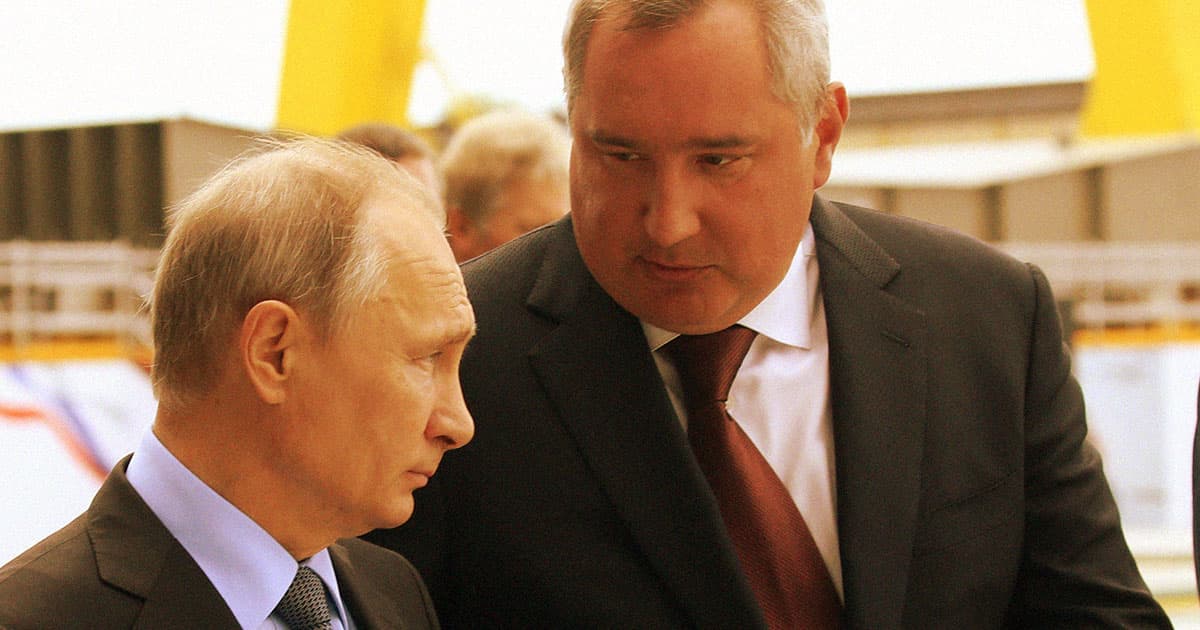 The ever controversial head of the Russian space program, Dmitri Rogozin, is being replaced by deputy prime minister Yury Borisov, according to an official statement by the Kremlin.

"Bye, Dmitri!" tweeted Jonathan McDowell, an astrophysicist at the Harvard-Smithsonian Center for Astrophysics.

It's unclear what Rogozin's next gig will be, but according to Russian news site Meduza, he could soon be overseeing operations in eastern Ukraine after repeatedly threatening neighboring countries with missile strikes — a move that would blur the lines between firing and promotion.

Rogozin went as far as to threaten the US with a plummeting International Space Station during the early days of the Russia's invasion earlier this year.

"Since the invasion of Ukraine, Rogozin has been increasingly bellicose and made numerous threats about Russian participation in the station," Ars Technica senior space editor Eric Berger, a close Rogozin watcher, tweeted in response to the news of the sacking. "While most of those threats have ended up being hollow, they have damaged working relations with the west."

Berger himself has repeatedly butted heads with Rogozin on Twitter, with the former space program head even accusing Berger of war crimes last year.

The news could take a massive load of pressure off NASA, which has been trying to keep operations on board the ISS going in spite of Rogozin's provocations.

The space agency is still planning to go ahead with a scheduled astronaut seat swap, allowing Russian cosmonaut Anna Kikina to travel to the ISS on board a SpaceX Crew Dragon spacecraft in September.

"No one is happier this morning than [NASA's] Johnson Space Center, from the astronaut office to the corner office to comms," Berger wrote in a follow-up. "Rogozin was a nightmare to work with and a destabilizing force in the ISS partnership."

"He was also a nationalist asshole, of course," Berger concluded.

While the international space community can breathe a little easier, having a belligerent and trigger-happy crony at the helm of an active warzone isn't exactly the most reassuring of prospects either.

The Kremlin has yet to announce what its official plans for Rogozin are next — but we already dread to hear where he's headed next.

More on the news: Rumors Swirl That the Deranged Head of the Russian Space Program Is Getting Fired

Read This Next
Don't let the door hit you
Elon Musk Lobs Casual Space Station Burn at Moscow
Sad ROSS
Russia's New Space Station Gets Sadder the More We Hear About It
Buh Bye
Russia Says It's Definitely Quitting the ISS But Doesn't Say When Exactly
Gone Girl
Rumors Swirl That the Deranged Head of the Russian Space Program Is Getting Fired
Virts Ramp
Former NASA Astronaut Says America Should Cut Russia Loose on the Space Station
More on Off World
Space Grow
Yesterday on the byte
Plans Announced for Full Greenhouse on International Space Station
Not Good
Monday on the byte
Mars Astronauts Would Get Horrifying Dose of Radiation, Study Finds
Under the Sea
Aug 13 on the byte
Harvard Professor Trying to Recover Alleged Alien Tech From Ocean
READ MORE STORIES ABOUT / Off World
Keep up.
Subscribe to our daily newsletter to keep in touch with the subjects shaping our future.
+Social+Newsletter
TopicsAbout UsContact Us
Copyright ©, Camden Media Inc All Rights Reserved. See our User Agreement, Privacy Policy and Data Use Policy. The material on this site may not be reproduced, distributed, transmitted, cached or otherwise used, except with prior written permission of Futurism. Fonts by Typekit and Monotype.