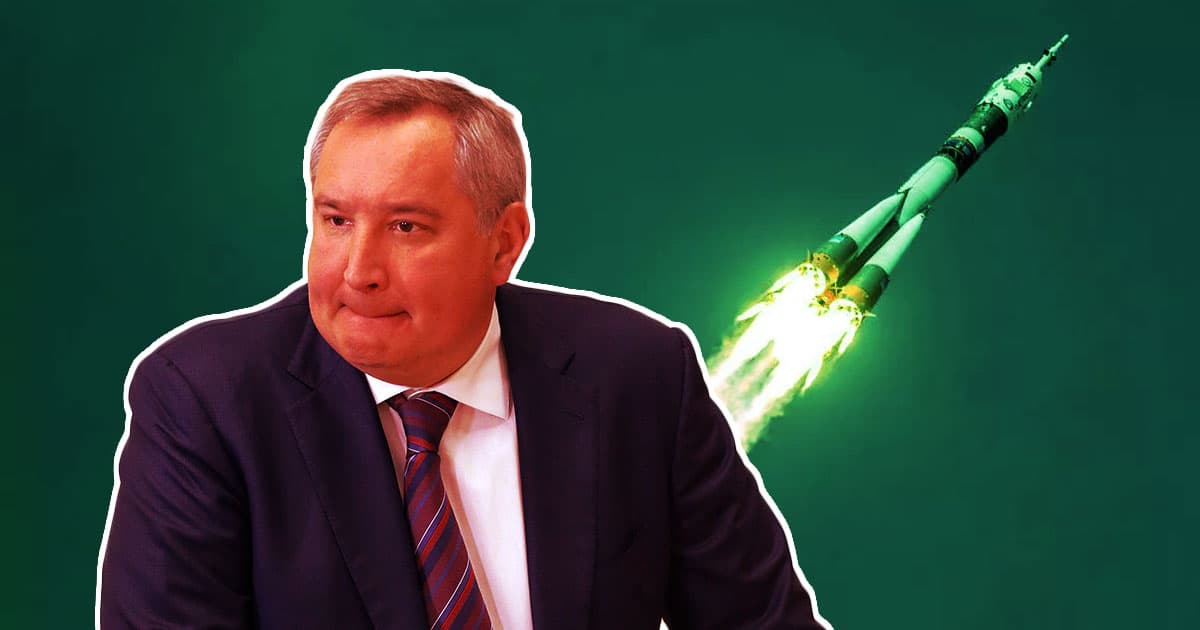 Russia's space program Roscosmos has backed itself into a corner after the country invaded Ukraine.

In response to the aggression, the United Sates announced a fresh wave of sanctions, many aimed at Russia's space industry specifically, among other targets.

The new restrictions have Russian leadership scrambling — with Roscosmos head Dmitry Rogozin turning to China for help. But whether China will continue to aid Russia in its space efforts remains pretty hazy, Space News reports.

"Despite our efforts to get the Russian microelectronic industry rolling, it is still outside the Roscosmos contour," Rogozin said during a new interview, as quoted by Russian news agency Interfax. "In any case it is impossible to produce everything. But there are good people in the world."

The report said that Rogozin and Roscosmos are looking to "buy from China spare parts for satellites whose supplies will be restricted under sanctions."

'We have excellent relations with China," Rogozin added. "We will solve these problems, and we will simply buy from our Chinese colleagues things that we cannot produce."

The new round of sanctions basically caused Russia's economy to implode, with the Russian ruble plummeting and the EU cutting the country off from the global interbank payments system SWIFT.

And to make matters worse for Russia, it sounds pretty unclear whether China is willing to help get around any of those new sanctions.

An unnamed Chinese official seemed to make it pretty clear that China may not help Russia evade US sanctions after all, according to a recent Reuters report. The reasoning: helping Russia right now would be a really bad look and could cut China off economically from the rest of the world.

Doing business with Russia to circumvent sanctions would be a "tacit or explicit accommodation to Russia's invasion of a sovereign country in the heart of Europe," the official told Reuters.

Chinese foreign ministry spokesperson Wang Wenbin echoed those sentiments, but distanced the country's stance from the ongoing conflict, telling reporters this week that "our relationship features non-alliance, non-confrontation and non-targeting of any third party."

"We always decide on our position and policy based on the merits of the matter itself," Wenbin added.

Russia and China have struck up several agreements to explore deep space over the last couple of years. For instance, the two countries are cooperating on an "International Lunar Research Station," working toward a permanent base on the Moon.

But where these plans stand right now is anything but clear. The new sanctions could also make developing the kind of technologies necessary for such a venture difficult, as SpaceNews points out.

Russia's space program will likely have to forge its own path going forward, as it's not just NASA actively distancing itself from Roscosmos. The European Space Agency also announced that its ExoMars mission to the Red Planet, a cooperation with Russia, may not launch this year after all.

And China may not be coming to the country's aid, either.

"I think China increasingly finds itself in between a rock and a hard place," University of Lapland professor of Chinese culture Matti Nojonen told SpaceNews, adding that "it must have surprised China how [the invasion] united all the Western powers."

Read This Next
And He Scores
We Are Completely Puzzled by This Video of a Chinese Astronaut Playing Ping-Pong in Space
Moon Wrestling
The Head of NASA Is Scared Chinese Astronauts Will Seize Portions of the Moon
Monkey Business
China Plans to Send Monkeys to Space Station to Have Sex With Each Other
Sabers Rattled
Russia Issues Veiled Threat to Shoot Down Pesky SpaceX Satellites
Sad ROSS
Russia's New Space Station Gets Sadder the More We Hear About It
More on Off World
Heavy Metal
6:27 PM on the byte
NASA Mars Rover Finds Metallic Object That Smashed Down on Surface
Small But Mighty
5:44 PM on the byte
Baby Asteroid Photobombs James Webb On Accident
Little Guy
3:28 PM on the byte
Scientists Prototype "Creeping" Lizard-Like Robot for Exploring Mars
READ MORE STORIES ABOUT / Off World
Keep up.
Subscribe to our daily newsletter to keep in touch with the subjects shaping our future.
+Social+Newsletter
TopicsAbout UsContact Us
Copyright ©, Camden Media Inc All Rights Reserved. See our User Agreement, Privacy Policy and Data Use Policy. The material on this site may not be reproduced, distributed, transmitted, cached or otherwise used, except with prior written permission of Futurism. Articles may contain affiliate links which enable us to share in the revenue of any purchases made.
Fonts by Typekit and Monotype.