There's a Reason NASA Doesn't Have to Submit to Russia: SpaceX

If it weren't for Crew Dragon, NASA may have been forced to abandon the International Space Station. 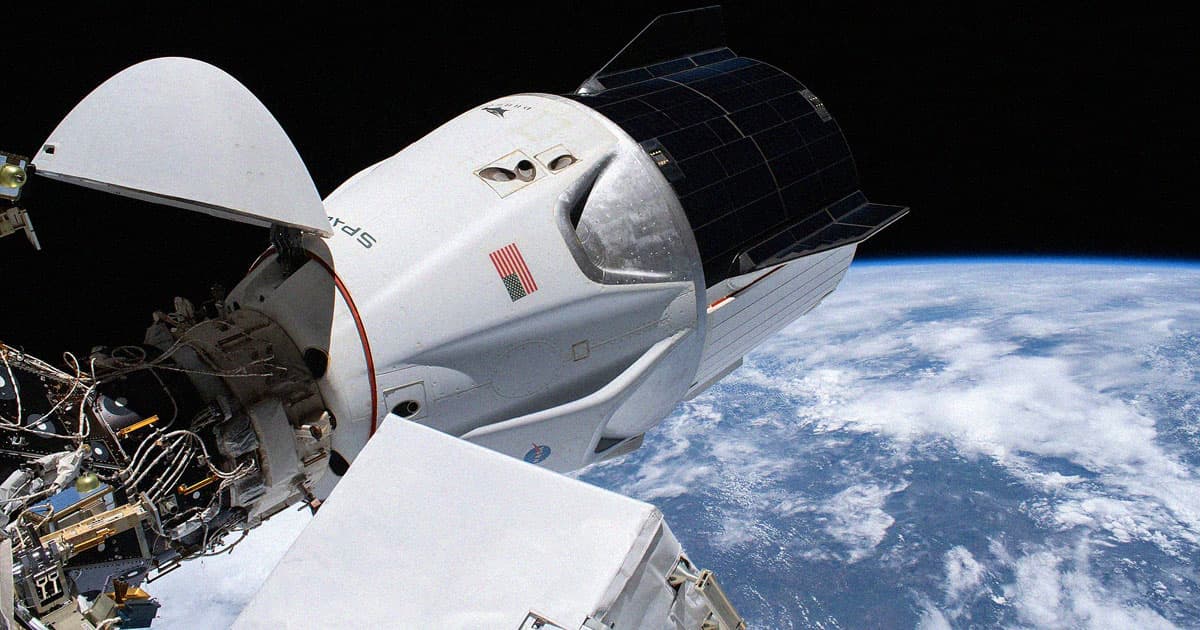 US President Joe Biden announced a fresh wave of sanctions aimed at Russia over its invasion of Ukraine on Thursday.

The goal: to cut off Russia's economic ties to the rest of the world, starve its military — and put its space industry on ice.

"We estimate that we will cut off more than half of Russia’s high-tech imports, and it will strike a blow to their ability to continue to modernize their military," Biden said during an announcement on Thursday. "It will degrade their aerospace industry, including their space program."

The Biden administration and NASA's considerable bargaining position — not to mention US access to the International Space Station, a decades long collaboration between the two countries — is greatly indebted to SpaceX, a company which has allowed NASA to send astronauts into orbit without leaning on Russia.

That's a new development. Ever since NASA retired the Space Shuttle in 2011, the agency had to rely exclusively on Russian-operated Soyuz spacecraft to send astronauts to the orbital lab.

That picture changed considerably in 2020, when SpaceX successfully launched the first NASA astronauts to the station in its Crew Dragon capsule, the result of the space agency's Commercial Crew contract.

"NASA's hand in navigating the current Russia crisis is immeasurably strengthened by the availability of Crew Dragon and its regular, reliable access to space," Ars Technica's senior space editor Eric Berger wrote in a tweet. "Absent that, they would face the choice of quietly submitting to Russian demands or abandoning the ISS."

While NASA and Russia's ties extend far beyond shuttling astronauts into space, "controlling access to the ISS is the ultimate trump card right now in low-Earth orbit," Berger argued in a followup tweet.

With its unprovoked invasion of a European nation, Russia has chosen a scorched-Earth approach — and its space program will likely suffer the consequences as well.

Dmitry Rogozin, the head of Russia's space corporation Roscosmos who has close ties to Russian president Vladimir Putin, made his stance clear.

"Glory to Russia," he tweeted on Monday.

Rogozin also attempted to flip the script in a different tweet on Monday.

"We really value our professional relationship with NASA, but as а Russian and citizen of Russia, I am completely unhappy with the sometimes openly hostile US policy towards my country," he wrote.

It's not just the US that has been relying on Russian-made rockets to reach orbit. For instance, Europe's Arianespace has been leaning on Russian Soyuz rockets to deliver satellites into orbit, an effort to establish Europe's own version of GPS.

How the international space community will react to Russia's invasion remains to be seen.

"NASA continues working with Roscosmos and our other international partners in Canada, Europe, and Japan to maintain safe and continuous International Space Station operations," a spokeswoman for NASA's Bill Nelson told Ars Technica on Wednesday.

That tenuous relationship is under some serious pressure, given Russia's aggression. The country is unsurprisingly aiming to launch its own space station over the next decade or so, having announced plans to abandon the ISS last year.

Where that leaves operations on board the International Space Station is anybody's guess.

But as the Russian invasion goes on, that picture may end up changing rapidly. Given Biden's sanctions, all eyes are on NASA. And thanks to SpaceX, they're in a much stronger position.

More on the situation: NASA Says Everything Is Perfectly Chill on the Space Station Despite the War