This Trial May Mean Elon Musk Is in Big Trouble

It's a real dumpster fire. 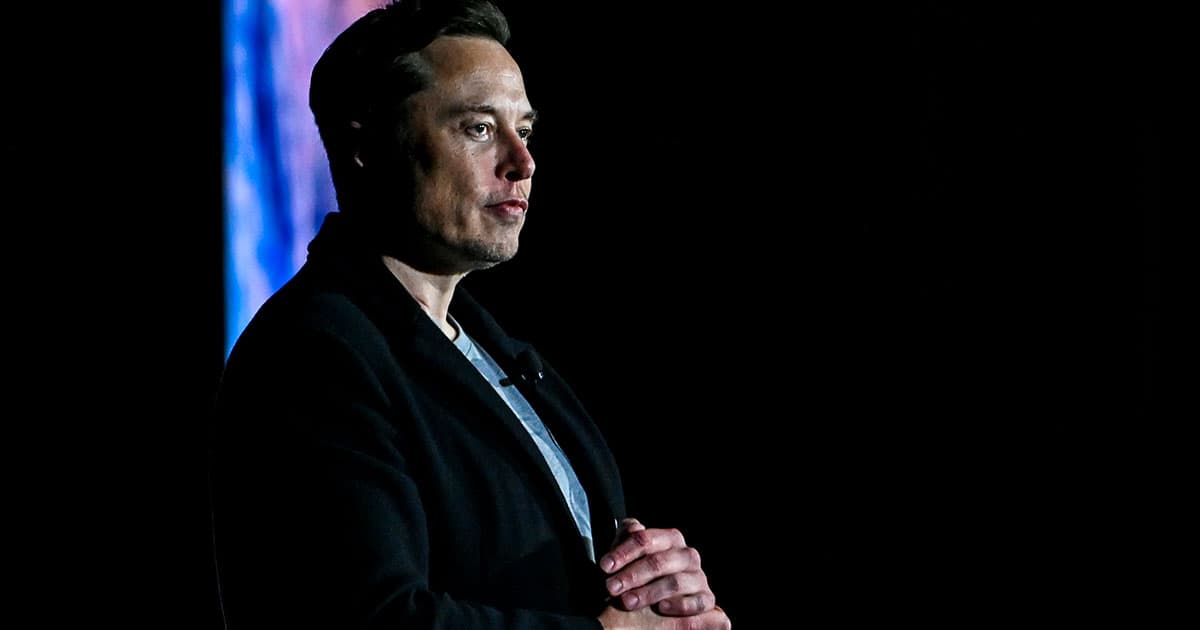 Twitter is officially suing Tesla CEO Elon Musk after the billionaire tried to buy the social media network for over $44 billion — before changing his mind and attempting to pull out of the deal.

Now, legal experts are saying things aren't looking good for Musk in the courtroom, Insider reports. His claim that he's backing out of the deal because Twitter misled him about the number of bots on the website is weak, they say, meaning he'll likely be forced to go through with the acquisition even after a dire economic downturn has lost him billions since he first floated the deal.

Making matters worse for Musk is the fact that Kathaleen McCormick, the judge overseeing the lawsuit in the Delaware Chancery Court, has a history of forcing buyers to complete acquisitions, according to Insider. There's also the small matter that Musk waived his due diligence, giving the court even more reason to side with Twitter.

In that scenario, it'd mean that Musk would have to pay Twitter the full $44 billion he initially offered. That would be a pretty awkward outcome, because Musk certainly doesn't appear want the site anymore — and Twitter's employees have made it pretty clear at this point that they don't want him to run Twitter, either.

Another potential outcome is that Musk will have to pay a big fine. While Twitter did include a $1 billion penalty in its contract with Musk, it's likely Twitter's lawyers will only see that as a very last resort, since there's far more money on the line.

The fact is that Musk has caused immense financial damage to Twitter — and his other ventures as well — by attempting to buy the company, and Twitter is trying to recoup some of those losses.

Twitter's stock price has fallen significantly since he first announced his bid earlier this year. Shares were hovering around the $50 mark right up until the point Musk announced his bid in late April. Now, they're worth only around $37. At the same time, Twitter's suit excoriated Musk for his behavior, presaging a rocky road even if he is forced to go through with the deal.

The disastrous acquisition plan could also threaten Musk's beloved car venture Tesla, where shares have been sliding precipitously among a broader economic downturn. Half the financing Musk came up with to buy Twitter came from his own pocket, with much of the rest coming from Tesla shares he sold.

Tesla is already not doing great. Thanks to Musk's "super bad feeling" about the economy, the CEO announced he is pulling on the purse strings and firing a sizeable chunk of Tesla's staff.

"My sense is that Musk's brashness throughout this deal is not only undermining some of his already thin legal case about how Twitter breached its side first, but it is also probably making it more and more likely he's going to suffer a big loss," Columbia Law School professor Eric Talley told Insider.

According to Talley, chances are McCormick "may be relatively unflinching" in her verdict, placing blame on Musk for making a "mess of this whole thing."

"Given the public facts that were available, and the complaint that was filed by Twitter's attorneys, I would say this is a very uphill battle from Mr Musk's perspective," Talley told Insider.

If Musk did have to pay up and close the deal, the Chancery Court could even attempt to seize assets, perhaps even going after Musk's most prized possession, Tesla.

That means the court "would have no problem reaching Musk’s Tesla stock," Miller argued.

Musk's options look rather limited, and given the precedent — the billionaire has a history of personally lashing out at lawyers — chances are it'll turn into an ugly legal battle.

A $44 billion hole in Musk's net worth could certainly sting, even for the richest man in the world. But what could hurt Musk far more than that is a damaged reputation.

Musk has repeatedly failed to play his cards right ever since announcing his bid to Twitter, offering up little in terms of reasoning as to why he was reversing course to back out.

It's a smoldering dumpster fire, in other words, that could soon go up in an inferno — and chances are Musk is already lighting the matches.

READ MORE: Twitter, Elon Musk, and the 'pleasant, unassuming' Delaware judge who may force him to pay tens of billions of dollars [Insider]

Read This Next
Sleepless in San Francisco
Elon Musk Reportedly Building "Sad Hotel Rooms" at Twitter HQ for Exhausted Employees
But His Emails!
Twitter Cofounder Says Elon Musk Is "Not a Serious Person"
D*** Pic Freedom
Elon Musk Thinks It’s Likely that “Something Bad” Will Happen to Him
Abso-Effing-Lutely
Free Speech Absolutist Elon Musk Discovers That Some Speech Is Unacceptable After All
Break Out in Hives
Twitter Competitor Shuts Down App When It Turns Out Hackers Can Read Users' Private Messages
More on Future Society
Phoney Business
Yesterday on the byte
Amazon Says It'll Pay You $2 Per Month to Spy on Your Phone's Internet Traffic
Elon Tusk
Yesterday on the byte
Rick and Morty Fans Now Embarrassed by Elon Musk's "Cringe" Cameo
Dirty Bird
Yesterday on the byte
Twitter HQ May Sink Into Literal Filth as Its Janitors Go on Strike
READ MORE STORIES ABOUT / Future Society
Keep up.
Subscribe to our daily newsletter to keep in touch with the subjects shaping our future.
+Social+Newsletter
TopicsAbout UsContact Us
Copyright ©, Camden Media Inc All Rights Reserved. See our User Agreement, Privacy Policy and Data Use Policy. The material on this site may not be reproduced, distributed, transmitted, cached or otherwise used, except with prior written permission of Futurism. Articles may contain affiliate links which enable us to share in the revenue of any purchases made.
Fonts by Typekit and Monotype.