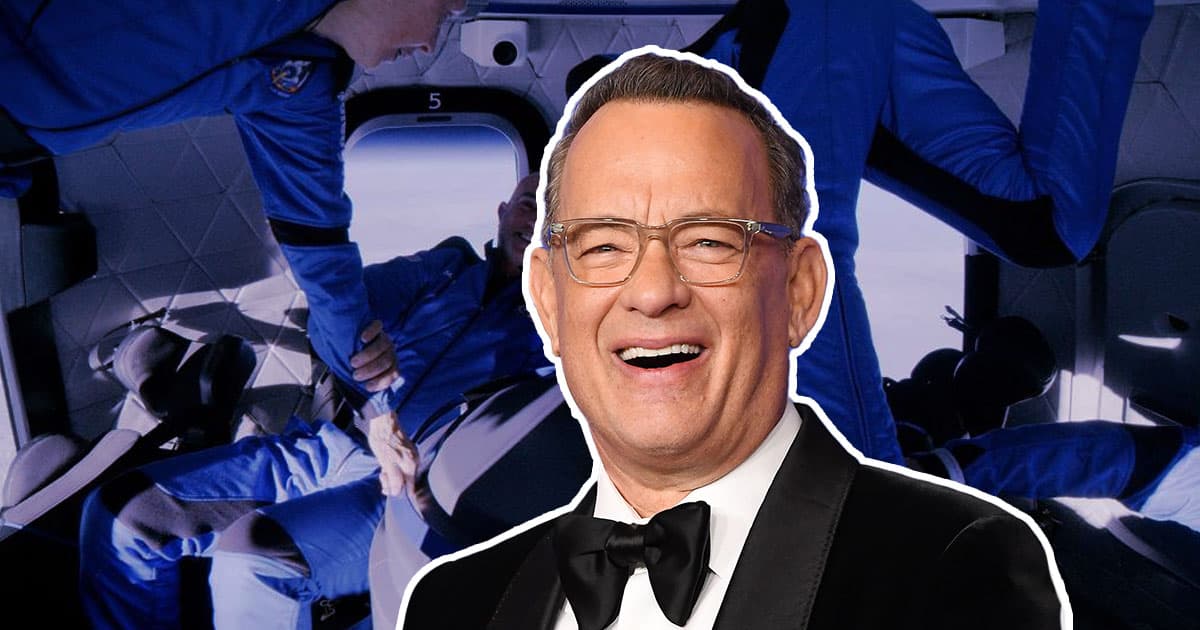 "Well, yah, provided I'd pay," an incredulous Hank recalled in an interview on Jimmy Kimmel Live, when late show host Jimmy Kimmel asked if the Blue Origin CEO offered him a ride. "You know, it costs like 28 million bucks or something like that."

Even for an A-grade Hollywood actor, that's a lot of dough.

He then proceeded to mock the expensive trip, telling audiences that he could easily have the same experience while sitting on his couch at home, while flailing his arms and legs as if he was in zero gravity.

The actor has starred in several famous movies that took place in space, most notably "Apollo 13." Earlier this year, veteran "Star Trek" actor William Shatner, known for playing the role of Captain  Kirk, took the 12 minute joyride into the upper atmosphere on board a Blue Origin New Shepard spacecraft — and was clearly shaken by the experience.

Hanks' interview is yet another instance of Blue Origin facing some considerable PR headwind. A string of heinous revelations had already sent shockwaves through the private space industry, revealing some ugly truths about the inner workings of the space company.

All told, Blue Origin has become something of an industry punching bag, with celebrities downplaying the 12 minute experience and writing it off as a way for billionaires to get face time on TV.

Even Shatner's co-star George Takei piled on recently, mocking the 90-year-old's journey into the upper atmosphere.

Then famed theoretical physicist Michio Kaku also slammed Blue Origin during a Fox Business interview last month, arguing that SpaceX is running circles — or completing orbits, if you will — around the competition.

Hanks, much like British royal family member Prince William, has no interest in blasting off to an altitude of 62 miles — which, besides, is a far cry from orbit. And especially at such an exorbitant price.

Celebrities don't seem terribly drawn to the space-lite experience that Blue Origin is offering, especially considering that spending tens of millions of dollars to experience a couple of minutes of weightlessness just isn't exactly the best PR move right now. Humanity has some much larger fish to fry back on Earth.

And that could be bad news for private space tourism companies going forward. In fact, last month, space tourism company Space Adventures had to cancel a flight organized under contract with SpaceX since they couldn't find enough rich people willing to buy a ticket.

It's up to these companies now to right the ship and regain the trust of the public — or at least address the constant mockery — if they want any chance of becoming a mainstay of the future of tourism.

Read This Next
Pale Blue Shat
William Shatner Explains Why His Trip to Space Was Horrible
Overview Effect
William Shatner Says His Space Trip Left Him With a Feeling of Terrible Grief
And Beyond
How NASA Got Price Gouged on the SLS, According to Its Former Second-in-Command
Billionaire Bailout
Bernie Sanders Working to Block Jeff Bezos From NASA Moon Contract
Billionaire Space Club
Man Getting Paid to Fly Rich Guys to Space Says Don't Worry, They're Not Just Idle Tourists
More on Off World
Killernova
Yesterday on the byte
Scientists Find "One in Ten Billion" Star System Primed to Explode in Titanic Kilonova
Lonely Planet
Feb 5 on futurism
Scientists Find Nearby Planet the Same Size of Earth, Plan to Search It for Life
Take Cover
Feb 4 on the byte
Space Startup Blows Up Another Giant Inflatable Space Station Module
READ MORE STORIES ABOUT / Off World
Keep up.
Subscribe to our daily newsletter to keep in touch with the subjects shaping our future.
+Social+Newsletter
TopicsAbout UsContact Us
Copyright ©, Camden Media Inc All Rights Reserved. See our User Agreement, Privacy Policy and Data Use Policy. The material on this site may not be reproduced, distributed, transmitted, cached or otherwise used, except with prior written permission of Futurism. Articles may contain affiliate links which enable us to share in the revenue of any purchases made.
Fonts by Typekit and Monotype.