William Shatner Tried to Tell Jeff Bezos About the Glory of Spaceflight, But Bezos Interrupted Him to Spray Staff With Champagne

"Give me a champagne bottle," Bezos said, gesturing to nearby staff and interrupting Shatner. "I want one." 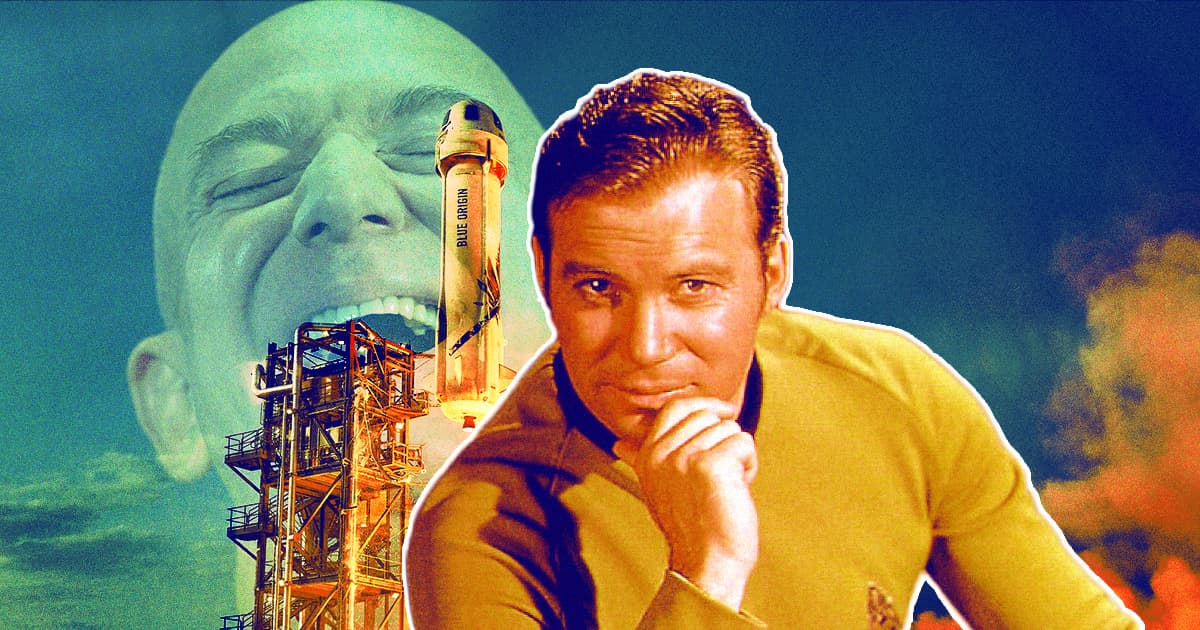 It was an awkward moment.

As soon as famed "Star Trek" actor William Shatner clambered out of Blue Origin's New Shepard capsule, as seen on Blue Origin's live stream today, he was clearly overcome, visibly shaken by the experience of seeing the Earth whip by.

Shatner, alongside three other passengers, reached an apogee of over 66 miles during today's launch, narrowly crossing the boundary of space, at least depending on who you ask.

But when he tried to tell the company's co-founder, Jeff Bezos, about the profound experience, things got weird.

As Shatner tried to wax poetic about the experience, Bezos listened for a few moments, but then turned away from a displeased-looking Shatner to focus on something more pressing: champagne.

"Give me a champagne bottle," Bezos said, gesturing to nearby staff and interrupting Shatner. "I want one."

"Here," the billionaire continued, popping the bottle and spraying Blue Origin employees with it as Shatner looked on, appearing nonplussed. "You want a little of this?"

Shatner, in contrast, seemed profoundly affected by the once-in-a-lifetime experience, and refused a swig from Bezos' bottle.

It was a brief and bizarre clash of wavelengths and priorities that encapsulated what Bezos seems to be after: building a profitable space empire, with more emphasis on glitz and glamor than the philosophical implications of space travel.

To Bezos' credit, he did take a couple of minutes to listen to Shatner wax poetic about life and death after hosing down his lackeys with bubbly.

"It was so moving," a shaken Shatner told Bezos. "This experience is something unbelievable," adding that every human on Earth should be able to have the same.

"To see the blue color go whip by," he added. "This comforter of blue we have around us... Then you're looking into black ugliness. There's mother of Earth and comfort, and then there is death. Is that what death is?"

Bezos stared at him almost incredulously. At one point, he muttered: "It's so beautiful."

"No, I mean your words," he clarified.

Shatner seemed genuinely moved by the experience, even if Bezos was in party mode.

"I hope I never recover from this," he told Bezos. "I don't want to lose it. It's so much larger than me and life."

Read This Next
Overview Effect
William Shatner Says His Space Trip Left Him With a Feeling of Terrible Grief
And Beyond
How NASA Got Price Gouged on the SLS, According to Its Former Second-in-Command
Billionaire Bailout
Bernie Sanders Working to Block Jeff Bezos From NASA Moon Contract
Heating Up
One Space Trip Emits a Lifetime's Worth of Carbon Footprint
Yikes
Newly Released Court Documents Obliterate Blue Origin's Lawsuit Against NASA
More on Off World
Watery Grave
Nov 22 on the byte
Chinese Military Forcefully Seizes Debris That Philippines Recovered After It Fell From Space
Jetsam
Nov 22 on the byte
Lunar Lander Released by NASA’s Artemis 1 Mission Dies
Not Not Accurate
Nov 21 on the byte
Bad Guy in New "Indiana Jones" Movie Is Nazi Who Works at NASA
READ MORE STORIES ABOUT / Off World
Keep up.
Subscribe to our daily newsletter to keep in touch with the subjects shaping our future.
+Social+Newsletter
TopicsAbout UsContact Us
Copyright ©, Camden Media Inc All Rights Reserved. See our User Agreement, Privacy Policy and Data Use Policy. The material on this site may not be reproduced, distributed, transmitted, cached or otherwise used, except with prior written permission of Futurism. Articles may contain affiliate links which enable us to share in the revenue of any purchases made.
Fonts by Typekit and Monotype.