"That was unlike anything they described." 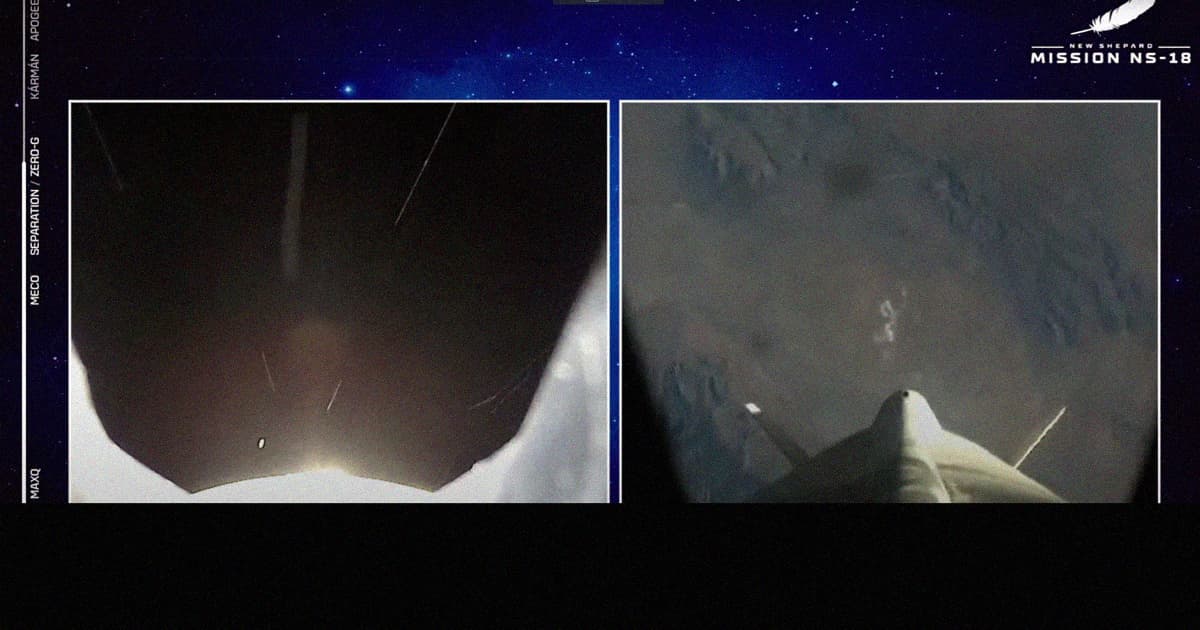 Beam me up, Jeffrey!

Blue Origin has launched William Shatner, best known as the actor who played Captain Kirk in the "Star Trek" franchise, to an altitude of 66.5 miles.

"That was unlike anything they described," Shatner could be heard saying while gliding back down the surface — despite having "gone where no man has gone before" as an actor.

Today's launch, however, went by without a hitch. It was the second crewed mission of the space company's New Shepard spacecraft, a phallic capsule that can seat a maximum of six passengers.

Whether that really counts as space, though, is up for debate. The capsule did technically breach the Karman line, an arbitrarily boundary internationally recognized as the boundary between the atmosphere and space, but remained several hundred miles short of being able to reach a stable orbit.

Today's passengers were able to enjoy several minutes of weightlessness, caused by the capsule falling back down towards the ground.

The New Shepard's reusable booster managed to land in one piece, marking the fourth time it made the trip.

Despite the success, today's launch comes at a troubling time for the space company. Will Bezos' renewed commitment help right the ship for his space tourism business? Only time will tell.

More on Blue Origin: A Guy Quit Blue Origin and Sent Jeff Bezos a Memo That Tore the Company to Shreds

Read This Next
Pale Blue Shat
William Shatner Explains Why His Trip to Space Was Horrible
Overview Effect
William Shatner Says His Space Trip Left Him With a Feeling of Terrible Grief
And Beyond
How NASA Got Price Gouged on the SLS, According to Its Former Second-in-Command
Billionaire Bailout
Bernie Sanders Working to Block Jeff Bezos From NASA Moon Contract
Heating Up
One Space Trip Emits a Lifetime's Worth of Carbon Footprint
More on Off World
Trashing Orbit
7:17 PM on the byte
Elon Musk Says SpaceX May Build Starship That Dies on Purpose
Cat and Mouse
3:38 PM on the byte
SpaceX to Launch "Hunter" Satellites for Targeting Rival Spacecraft
Space In Space
1:44 PM on the byte
NASA Official Admits There's a Bit of an Issue on the Space Station
READ MORE STORIES ABOUT / Off World
Keep up.
Subscribe to our daily newsletter to keep in touch with the subjects shaping our future.
+Social+Newsletter
TopicsAbout UsContact Us
Copyright ©, Camden Media Inc All Rights Reserved. See our User Agreement, Privacy Policy and Data Use Policy. The material on this site may not be reproduced, distributed, transmitted, cached or otherwise used, except with prior written permission of Futurism. Articles may contain affiliate links which enable us to share in the revenue of any purchases made.
Fonts by Typekit and Monotype.