"I’ve gotten far enough away from it that I’m not afraid enough to let them silence me anymore." 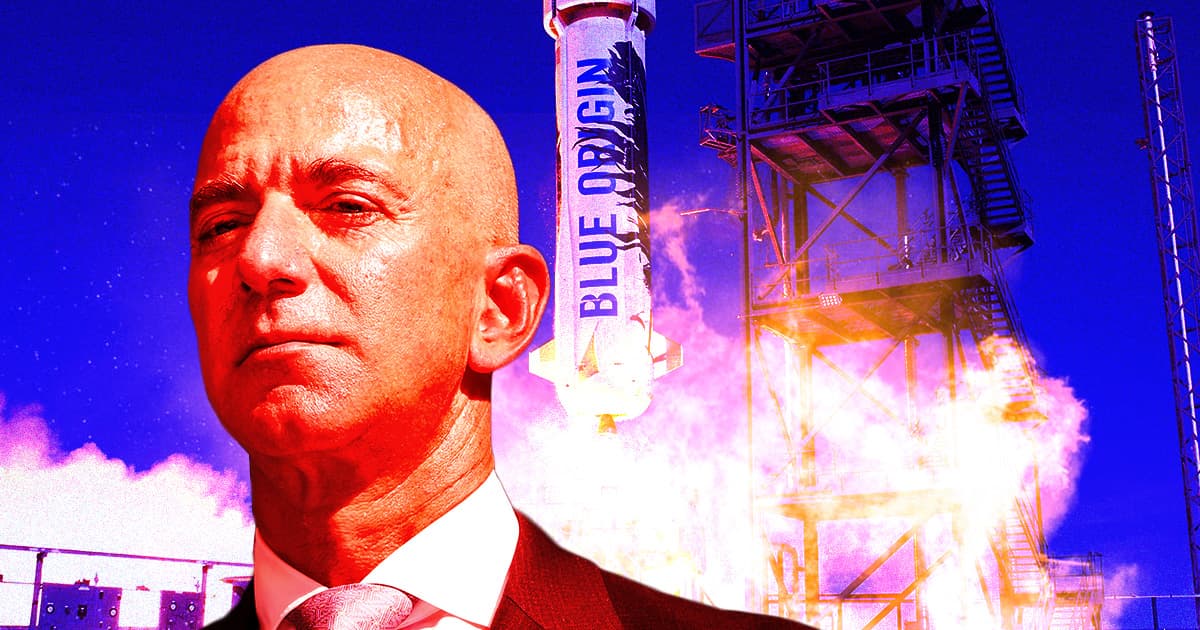 While Jeff Bezos' Blue Origin is directly impeding NASA's efforts to get the first astronauts back to the Moon since 1972, the space company is facing some serious inner turmoil.

An essay signed by 21 current and former employees paints a bleak picture of what it's like to work at Blue Origin, a company that the signers say is "rife with sexism" and often pushes employees to their limits.

"Many of us have spent our careers dreaming of helping to launch a crewed rocket into space and seeing it safely touch back down on Earth," the employees wrote in the essay. "But when Jeff Bezos flew to space this July, we did not share his elation. Instead, many of us watched with an overwhelming sense of unease. Some of us couldn’t bear to watch at all."

Alexandra Abrams, the former head of Blue Origin Employee Communications and the only former employee whose name appeared on the letter, was "dismissed for cause" in 2019 "after repeated warnings for issues involving federal export control regulations," Blue Origin's vice president of communications Linda Mills told CNBC.

"I’ve gotten far enough away from it that I’m not afraid enough to let them silence me anymore," Abrams told CBS.

It's a turbulent time for Blue Origin, a company that is actively seeking to overturn NASA's decision to chose SpaceX for developing a Moon lander. Bezos sued the space agency over the decision last month, causing plans to return astronauts to the Moon to be put on hold.

"The last couple of months, since Jeff Bezos went to space, have been shockingly terrible for his space company's public image," Ars Technica space reporter Eric Berger wrote today. "They have fallen so far, so fast, it's difficult to really wrap my head around it."

It's also not the first time we've heard about harsh working conditions inside Blue Origin. Last year, employees spoke out about being put under immense pressure to launch the company's New Shepard rocket during the COVID-19 pandemic, as The Verge reported at the time.

The new revelations paint a dire picture of the working conditions inside Blue Origin. In the essay, the employees argued that the company's culture and work environment "reflects the worst of the world we live in now, and sorely needs to change."

The former employees also mentioned several instances of alleged sexual harassment — including by senior level managers — inside a company run by an "overwhelmingly white" and male workforce.

The letter also claimed that "teams are stretched beyond reasonable limits," leading to compromises in flight safety of the company's New Shepard spacecraft.

The company was also reportedly very stingy with its resources. "Employees are often told to 'be careful with Jeff’s money,' to 'not ask for more,' and to 'be grateful,'" reads the letter.

"It should not take loss of life to turn our eye toward what goes on behind closed doors at space companies," the essay reads. "Lack of rules and regulation has helped the commercial space industry thrive, but the time has come — now that the public is boarding flights — to allow accountable oversight."

Worse yet, all employees were apparently asked in 2019 to "sign new contracts with a non-disparagement clause binding them and their heirs from ever saying something that would 'hurt the goodwill of the company,'" according to the former employees.

Blue Origin maintains that the company "has no tolerance for discrimination or harassment of any kind," Mills wrote in her statement to CNBC. "We provide numerous avenues for employees, including a 24/7 anonymous hotline, and will promptly investigate any new claims of misconduct."

All told, the former employees lay out some pretty serious allegations. Blue Origin's PR department has its work cut out for it — especially given the company's already tarnished reputation.

Read This Next
Shoo
Scientists Warn Giant Asteroid Is Actually Swarm, Nearly Impossible to Destroy
A Sip of Opal
NASA Discovers Precious Gemstones on Mars
Moon Wrestling
The Head of NASA Is Scared Chinese Astronauts Will Seize Portions of the Moon
Shot Well
Head of NASA Relieved to Hear Elon Musk Isn't REALLY Running SpaceX
Pale Blue Shat
William Shatner Explains Why His Trip to Space Was Horrible
More on Off World
Stunning Centaur
Yesterday on the byte
James Webb Spots Asteroid With Its Own Saturn-Like Rings
Grrrrrrrr
Friday on the byte
Internet Erupts as NASA Spots Cartoon Bear on Surface of Mars
Gl1tc4
Friday on the byte
NASA Says Another James Webb Instrument Has Suffered a Glitch
READ MORE STORIES ABOUT / Off World
Keep up.
Subscribe to our daily newsletter to keep in touch with the subjects shaping our future.
+Social+Newsletter
TopicsAbout UsContact Us
Copyright ©, Camden Media Inc All Rights Reserved. See our User Agreement, Privacy Policy and Data Use Policy. The material on this site may not be reproduced, distributed, transmitted, cached or otherwise used, except with prior written permission of Futurism. Articles may contain affiliate links which enable us to share in the revenue of any purchases made.
Fonts by Typekit and Monotype.