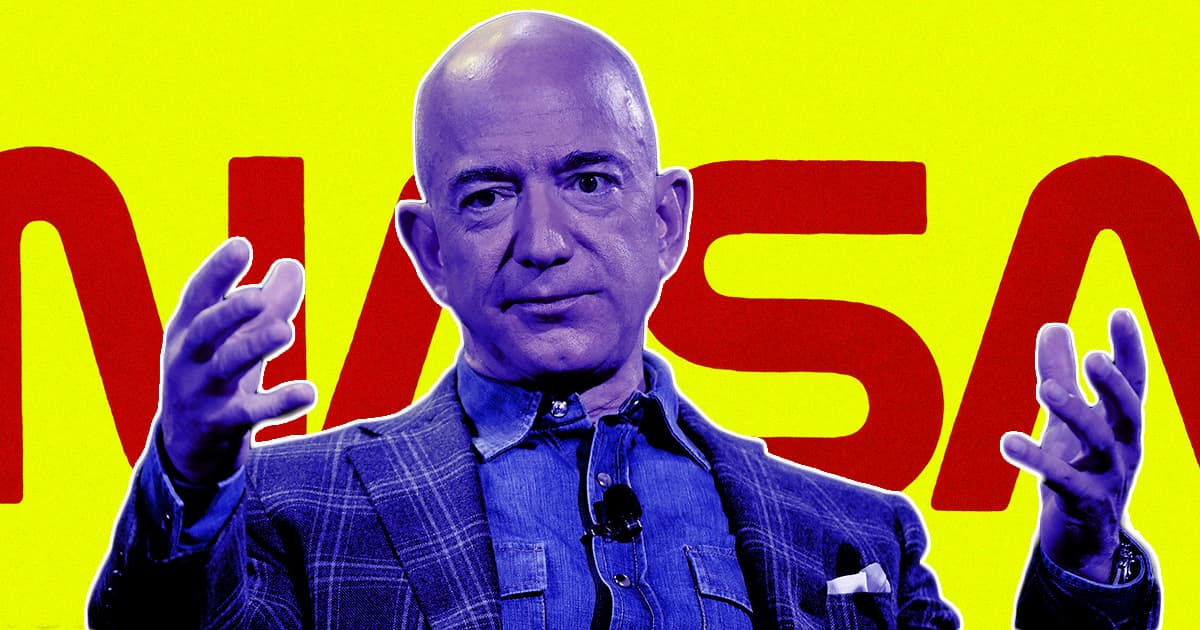 Instead of making progress on its massively ambitious plans to return astronauts to the surface of the Moon, NASA is embroiled in legal battles over its decision to hand SpaceX its lunar lander contract.

The backstory is that back in 2019, NASA put out a call to the private space industry for a new spacecraft design capable of returning the first astronauts to the lunar surface since 1972.

After several rounds, SpaceX was awarded a $2.9 billion contract in April — prompting protests and a lawsuit against NASA by Blue Origin.

NASA's hands were tied with extremely limited funding from Congress and ended up choosing the lowest bidder. Blue Origin however chose a different negotiation tactic, pitching its Blue Moon lander for almost twice as much: $5.9 billion.

In the documents obtained by The Verge, NASA argued in May that Blue Origin was acting in bad faith and chose to come in at a much higher bid with the expectation of NASA negotiating them down.

Blue Origin was convinced that NASA would have enough money from Congress to cover its steep asking price — but that couldn't have been further from the truth, with lawmakers putting NASA's project to return to the Moon under restrictive financial constraints.

The Bezos-led company argued that it should've changed the terms of the contract once it was clear Congress was only going to give it a fraction of what it requested, according to The Verge.

NASA wasn't convinced at all by that argument, calling the space company out for making a bet that "it lost" in the documents.

"Realizing now that it gambled and lost, Blue Origin seeks to use GAO’s procurement oversight function to improperly compel NASA to suffer the consequences of Blue Origin’s ill-conceived choices," the space agency's attorney wrote in a May report, as quoted by The Verge.

Even Bezos sweetening the deal with a $2 billion discount in July didn't sway NASA's leadership.

So where does all of this leave NASA's Artemis program? Blue Origin's lawsuit has already been a huge setback for the agency's ambitious plans.

And the stakes are higher than ever. SpaceX and NASA could soon resume meaningful progress on the Starship launch vehicle — or the entire contract could have to be redone in its entirety, which could represent a huge blow for the agency's efforts to return astronauts to the Moon.

Read This Next
Shoo
Scientists Warn Giant Asteroid Is Actually Swarm, Nearly Impossible to Destroy
A Sip of Opal
NASA Discovers Precious Gemstones on Mars
Moon Wrestling
The Head of NASA Is Scared Chinese Astronauts Will Seize Portions of the Moon
Shot Well
Head of NASA Relieved to Hear Elon Musk Isn't REALLY Running SpaceX
Pale Blue Shat
William Shatner Explains Why His Trip to Space Was Horrible
More on Off World
Grrrrrrrr
Yesterday on the byte
Internet Erupts as NASA Spots Cartoon Bear on Surface of Mars
Gl1tc4
Yesterday on the byte
NASA Says Another James Webb Instrument Has Suffered a Glitch
comet Spotting
Yesterday on the byte
Behold! Dazzling Green Comet Approaches
READ MORE STORIES ABOUT / Off World
Keep up.
Subscribe to our daily newsletter to keep in touch with the subjects shaping our future.
+Social+Newsletter
TopicsAbout UsContact Us
Copyright ©, Camden Media Inc All Rights Reserved. See our User Agreement, Privacy Policy and Data Use Policy. The material on this site may not be reproduced, distributed, transmitted, cached or otherwise used, except with prior written permission of Futurism. Articles may contain affiliate links which enable us to share in the revenue of any purchases made.
Fonts by Typekit and Monotype.