"The Metaverse isn’t being built to revolutionize remote working. It's being built because they need to believe they can build heaven." 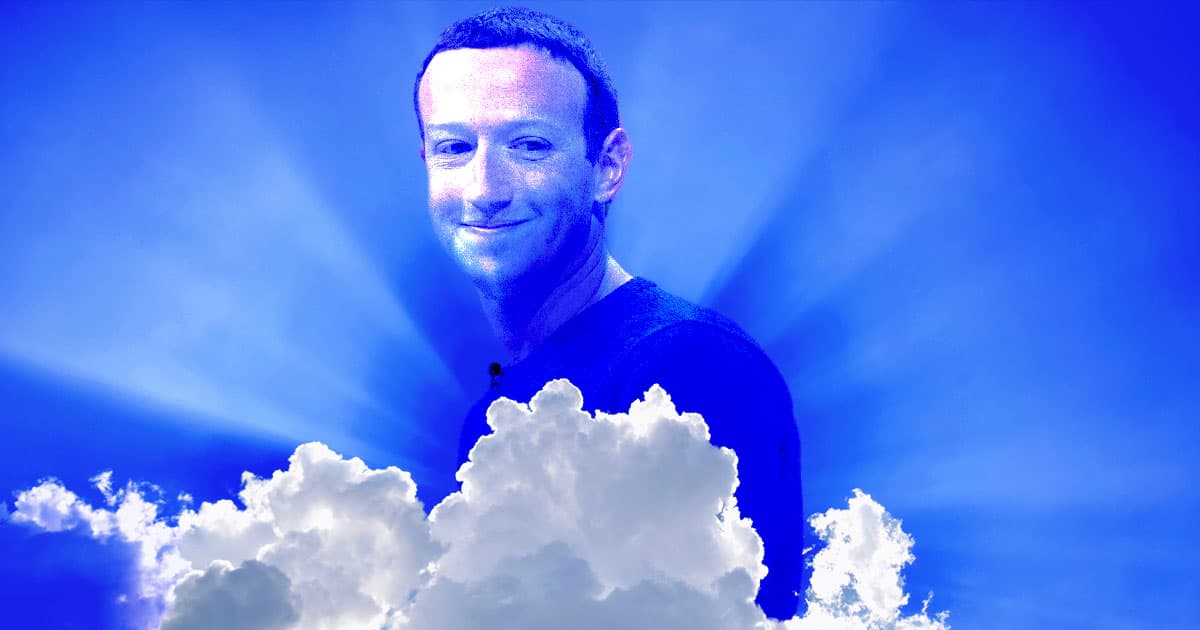 When Facebook-turned-Meta CEO Mark Zuckerberg first declared his metaverse vision, he was immediately met with a "nobody asked for this" energy from the general public. Virtual reality, which his vision is absolutely dependent on, isn't exactly that mainstream, and the tech was — and still is — far from what it needs to be in order to offer users a truly immersive experience.

Fast forward about a year, a few high profile collaborations, another Meta Connect conference, and $15 billion later, the legless public is still asking similar questions. The tech just isn't there yet, and neither, it seems, is the public desire to participate. We have social media, we have Zoom and Google and Slack for work, and so on. Where do we need to revolutionize connection, why do we need a new-new future of work?

According to technologist Emily Gorcenski, to actually understand the Facebook Overlord's metaverse push, we have to stop asking ourselves what we might be asking for. The metaverse isn't about us — it's about Zuck himself, who in her eyes isn't just aiming to solve hard compression or legless avatars or other hardware and software hurdles. He wants to solve the problem of his own mortality, and he wants to do so by literally building heaven.

"To understand the Metaverse," Gorcenski wrote in a fascinating Twitter thread, "means you have to understand that rich techno nerds genuinely believe they will be able to upload their consciousness before they die."

"The Metaverse isn’t being built to revolutionize remote working. It's being built because they need to believe they can build heaven," she continued. "You know who builds heavens? Gods."

While that might sound extreme, it's not that outlandish. The rich and famous have long been known for their obsession with eternal life, and those efforts, whether myth or reality, have pretty much always been connected to technology and those who build it. Billionaire Peter Thiel has allegedly given some thought to seeking life-extending blood transfusions from young people. Amazon founder Jeff Bezos is actively funding immortality tech.

And now Zuckerberg, who's spent most of his life turning humans into datasets, seems like maybe he too wants his consciousness to exist forever in a digital world of his own design.

A Zuckerbergian quest to become a digital deity would certainly outdo his colleagues' feeble little alleged dreams of pushing their mortal little bodies a few years further down the real-life line. And of course, to be a god, you need subjects — a detail that Gorcenski also addresses in her argument, proffering the dark theory that "in Digital Heaven, better rewards could be given to those who contributed more data and effort to keep heaven running."

"Therefore," Gorcenski added, "you have to do everything in your power now to make [Digital Heaven] a reality." Given that Facebook pioneered datamining, that's not the craziest thought.

Now, if you're thinking, "I would never be a mortal in Zucko's bonkers pixelated afterlife," it could be argued that bits and pieces of this theoretical digital future are already playing out, in varying degrees, among the masses. Just look at the contemporary beauty industry, which has somehow become a version of augmented reality unto itself: today's filtered, synthetic standards — which notably proliferated on Instagram, an app owned by Meta and thus part of the Zuckerverse — are as inextricably obsessed with forever youth as they are with the unreal sameness of the digital world; faces and bodies are molded and modified in order to comply with digital demands, and less so for those of any non-virtual reality. A photo, after all, is forever. Would one's perfected digital existence in the metaverse not be a natural next step?

And if you want an even more literal example, take "grief tech" startups, which have already offered real people the opportunity to turn themselves into an undying, interactive algorithm after death. Sure, these companies are far from being able to upload users' actual consciousness, but a version of immortality is inherently the goal. If Zuck can build the platform — in other words, the heaven — these apps would surely help occupy it. Meanwhile, other AI startups are already attempting to bring famous people back from the dead.

Of course, this is all a bit of psychoanalysis, and we're almost sure that Zuckerberg isn't standing up in Meta meetings and proclaiming himself to be their immortal lord. Almost. But the desire to live forever appears to be written into Silicon Valley's DNA — and that in mind, the creation of a digital afterlife may have always been inevitable.

"The cruelest thing that can happen to Zuckerberg," wrote Gorcenski, "is that he dies, like a normal person, like all the rest of us."

More on the metaverse: Facebook Investor Warns Zuckerberg That Metaverse Investments Are "Terrifying"

Read This Next
Scammers Scam On
The Fyre Fest Guy Is Off House Arrest and of Course His New Scheme Involves the Metaverse and Crypto
Confrontation is Hard
Former Facebook Exec Says Zuckerberg Has Surrounded Himself With Sycophants
Virtual Signing
Sign Language in Virtual Reality Actually Looks Kinda Awesome
Make Mark Happy
Facebook Employees Seem Completely Confused by the Metaverse
Midlife Crisis
Rumors Swirl That Mark Zuckerberg Is Fighting at a UFC Show
More on Future Society
Woof Woof
Yesterday on the byte
Startup Unveils Videogame for Dogs
Musk's Guns
Monday on the byte
We Are Alarmed by Every Detail of Elon Musk's Bedside Table
Head Like A Hole
Nov 23 on futurism
Elon Musk's Crying About Trent Reznor Shows That He Is a Big, Big Baby
READ MORE STORIES ABOUT / Future Society
Keep up.
Subscribe to our daily newsletter to keep in touch with the subjects shaping our future.
+Social+Newsletter
TopicsAbout UsContact Us
Copyright ©, Camden Media Inc All Rights Reserved. See our User Agreement, Privacy Policy and Data Use Policy. The material on this site may not be reproduced, distributed, transmitted, cached or otherwise used, except with prior written permission of Futurism. Articles may contain affiliate links which enable us to share in the revenue of any purchases made.
Fonts by Typekit and Monotype.