"Mom answered questions from grieving relatives after they had watched her cremation." 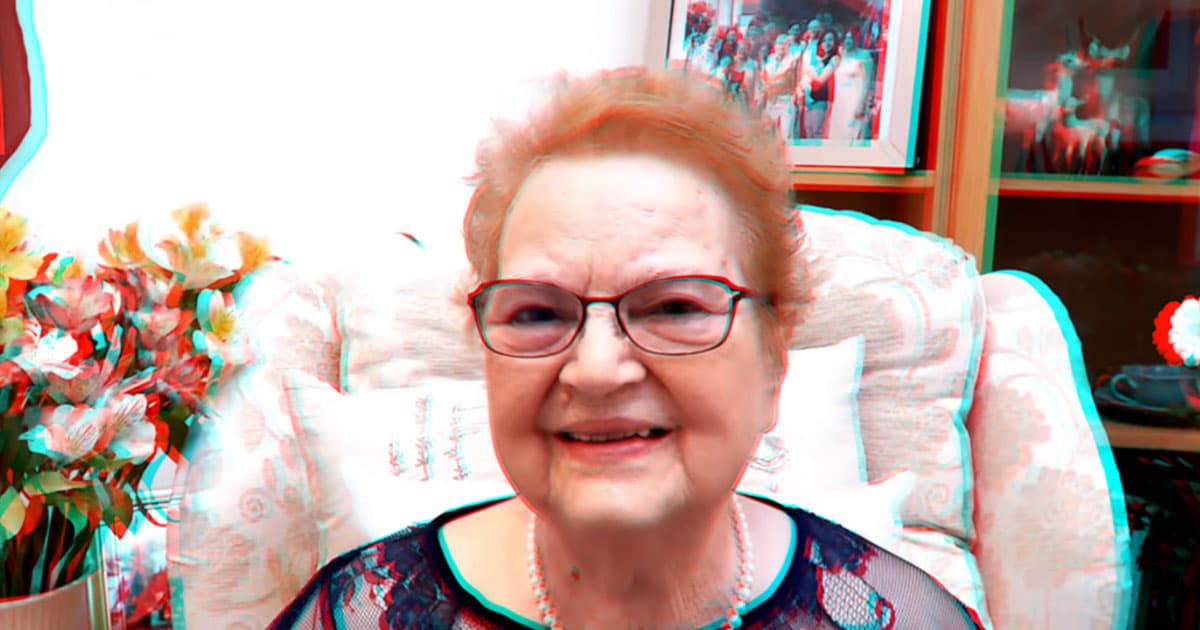 Marina Smith, a 87-year-old woman who passed away in June, was able to address the mourners at her own funeral in the UK — sort of, at least, thanks to the power of artificial intelligence.

The woman was able to surprise the guests at the funeral in the form of a "holographic conversational video experience," created by a startup called StoryFile.

The company was founded by Smith's LA-based son Stephen and was originally created to preserve the memories of Holocaust survivors.

StoryFile used 20 cameras to film the woman answering around 250 questions prior to her death. This data was then fed into a software tool that was able to virtually recreate her after she passed.

The illusion must have been pretty shocking to funeral goers. Stephen Smith was able to converse with the virtual representation of his mother in real time, and even gave attendants the opportunity to ask questions as well.

"Mum answered questions from grieving relatives after they had watched her cremation," Smith told The Telegraph.

"The extraordinary thing was that she answered their questions with new details and honesty," he added. "People feel emboldened when recording their data. Mourners might get a freer, truer version of their lost loved one."

She's not the only one to have been revived with the power of AI by StoryFile. A holographic representation of the former Screen Actors Guild president Ed Asner was able to answer questions from attendees at his own funeral earlier this year.

"Nothing could prepare me for what I was going to witness when I saw it," Matt Asner, the actor's son, told Axios last month.

Other attendees were "a little creeped out by it," Asner added, because it was "like having him in the room."

StoryFile's efforts are representative of a much larger push by Silicon Valley to bring back the dead with the power of machine learning. Earlier this year for instance, tech giant Amazon showed off a creepy new feature of its Alexa smart speaker involving a late grandmother's voice reading a bedtime story to a child.

The biggest question: why? Was Stephen Smith looking for closure when virtually recreating his mother at her funeral? What does this technology do that simple audio or video recordings can't?

READ MORE: Grandmother talks to mourners at her own funeral [The Telegraph]

More on AI and the dead: Amazon Shows Off Tech That Lets Alexa Copy Voice of Dead Relatives

Read This Next
Unforgettable
Guy "Outsources" His Own Memory to AI
Be Better
OpenAI Apparently Paid People in the Developing World $2/Hour to Look at the Most Disturbing Content Imaginable
CNET Money is Watching You
After Scandal, CNET Adds Strange Disclaimer to Human-Written Articles About AI
Awful!
Internet Horrified by CNET Secretively Publishing Articles Written by an AI
Cover Up
In a Fresh Horror, ChatGPT Can Apply to Jobs Now
More on Artificial Intelligence
AI Asshole
Yesterday on the byte
BuzzFeed Columnist Tells CEO to "Get F*cked" for Move to AI Content
Deepfaked Neighbors
Yesterday on futurism
Trashy TV Prank Show Deepfakes Celebrities Into Jackass-Style Situations
Bad Bots
Yesterday on the byte
Oxford Scientists Warn AI Could Be More Deadly Than Nuclear Weapons
READ MORE STORIES ABOUT / Artificial Intelligence
Keep up.
Subscribe to our daily newsletter to keep in touch with the subjects shaping our future.
+Social+Newsletter
TopicsAbout UsContact Us
Copyright ©, Camden Media Inc All Rights Reserved. See our User Agreement, Privacy Policy and Data Use Policy. The material on this site may not be reproduced, distributed, transmitted, cached or otherwise used, except with prior written permission of Futurism. Articles may contain affiliate links which enable us to share in the revenue of any purchases made.
Fonts by Typekit and Monotype.