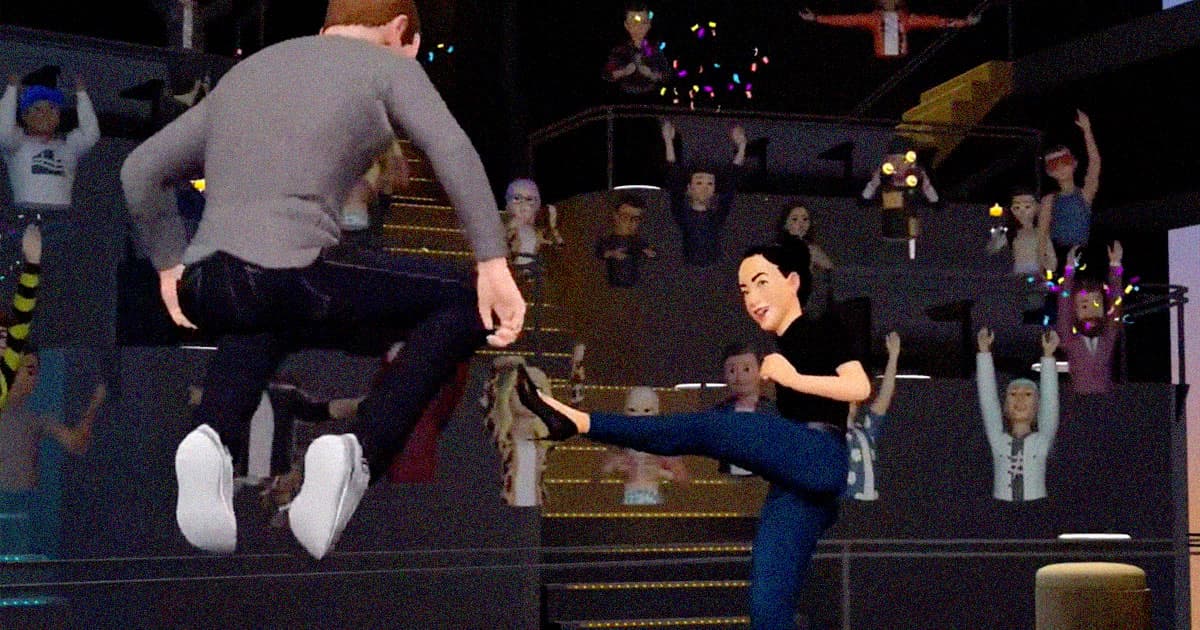 Zuckerberg's Metaverse Maybe Has Legs Now, but Apparently Only for Executives

Houston, we have legs. Maybe. For Meta executives, at least. Hell yeah?

Between showing off a number of not-yet-met metaverse tech goals and announcing every corporate collaboration imaginable, Facebook-turned-Meta CEO Mark Zuckerberg used a decent chunk of his Connect 2022 keynote presentation to show off all of the upgrades coming to avatars in the company's main metaverse app, Horizon Worlds — important upgrades to make, considering that these avatars have faced seemingly endless criticism from the masses for their cold, dead-eyed demeanors and, uh, not having any legs.

But as Zuck was quite eager to show off, legs are on their way! In a pre-recorded Horizon Worlds session (the first time an actual Horizon Worlds clip, and not just a rendering of what the world could be, has been featured at Connect), the founder and avatar development exec Aigerim Shorman both appeared as their new-and-improved, legged avatars, hopping and kicking to show off their pixelated stems.

Weirdly enough, though, only they had them, and notably not the plebs gathered 'round to cheer them on — a signal, perhaps, that while legs might indeed be on the way, it might take a good while. Either that, or Meta's trying to make up for lost revenue with a pay-per-limb avatar model.

Legs are coming soon! Are you excited? 🎉 pic.twitter.com/SB6qSepKm4

That lack of legs in particular has long plagued Zuck's expensive metaverse vision, one centered on both realism and complete immersion; immersion is a difficult thing to achieve in a space where rudimentary, Wii Mii-like faces roam around as floating torsos. And on that note, judging by the way he talked about (and over-explained) the no-leg situation, you could tell that the criticism really gets to him.

"Seriously, legs are hard," said a salty, post-hop VR Zuck, "which is why other virtual reality systems don't have them either."

Meta claims to have solved the problem through predictive AI, which, as Zuck further explained, is able to statistically track and predict how a Horizon Worlds avatar's limbs would naturally be following any given movement. This would eliminate the issue of occlusion, and voíla: legs for all. At some point. Probably.

Anyway. Cheers to Zucko and his top metamates as they bunny hop and backstab through Horizon and beyond, making Instagram Reels and answering Zoom calls — two other new improvements to the avatars — with their still-glossy-eyed digital selves.

And remember, everyone. Legs are hard. For everybody.

READ MORE: Meta figured out legs for its avatars [The Verge]

Scammers Scam On
The Fyre Fest Guy Is Off House Arrest and of Course His New Scheme Involves the Metaverse and Crypto
Wednesday
Read More
Confrontation is Hard
Former Facebook Exec Says Zuckerberg Has Surrounded Himself With Sycophants
Nov 18
Read More
Virtual Signing
Sign Language in Virtual Reality Actually Looks Kinda Awesome
Nov 1
Read More
+Social+Newsletter
TopicsAbout UsContact Us
Copyright ©, Camden Media Inc All Rights Reserved. See our User Agreement, Privacy Policy and Data Use Policy. The material on this site may not be reproduced, distributed, transmitted, cached or otherwise used, except with prior written permission of Futurism. Articles may contain affiliate links which enable us to share in the revenue of any purchases made.
Fonts by Typekit and Monotype.