"We have a new north star: to help bring the metaverse to life." 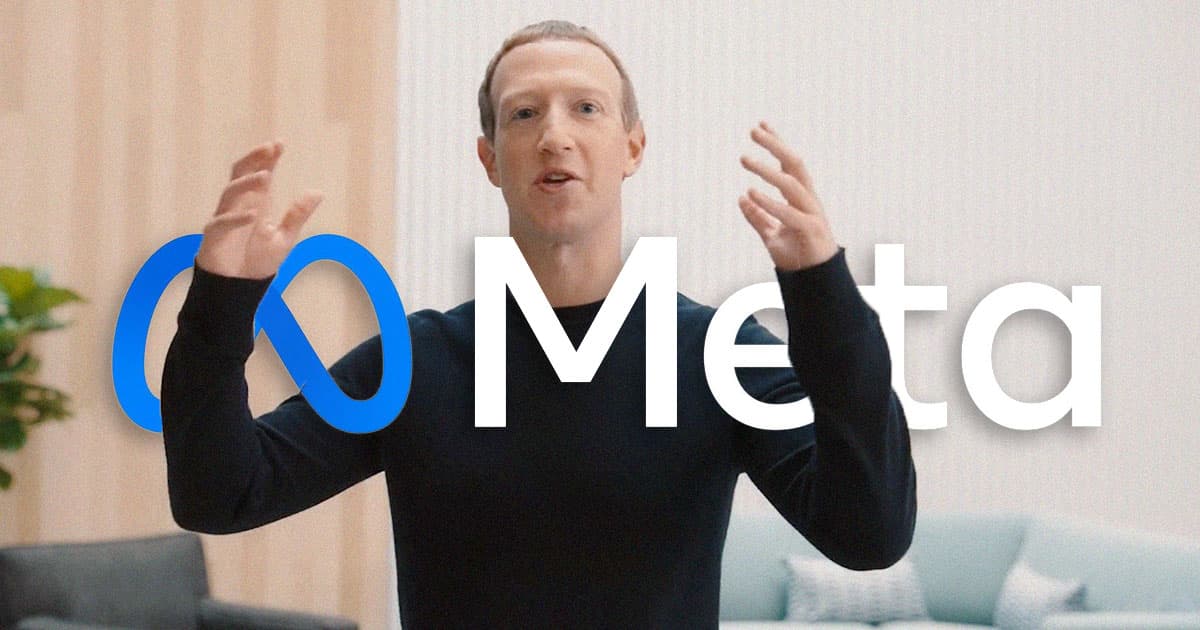 CEO Mark Zuckerberg made the announcement at the end of the company’s Connect conference, which was dedicated to its grand vision for its augmented and virtual reality products. In his concluding remarks, he stressed the company’s focus on developing its metaverse before announcing the name "Meta."

"Over time I hope that we are seen as a metaverse company," Zuckerberg said. "I want to anchor our work and our identity in what we’re building towards."

"Our mission remains the same; it’s still about bringing people together," he added.

Ahead of Facebook’s big product event on Thursday, the company covered up its iconic "like" sign outside of its offices in Menlo Park, California with a giant canvas that also shows the thumbs up symbol. This threw fuel onto the raging fire of speculation that the social media giant planned to adopt a new name.

The sign at Facebook's HQ is currently covered by a canvas presumably in anticipation of its name change.

Any last guesses before the reveal? pic.twitter.com/m178QXrX4F

"My best guess for the new name: ‘Meta,'" Chakrabarti wrote on Twitter.

The tweet proved to be downright prescient as the company is now shifting its focus to pursue its ambitious goal of establishing a metaverse.

Throughout the Connect conference, Zuckerberg unveiled the company’s latest innovations in VR and AR technology. He also dove deeper into his goals for the metaverse and Meta’s future.

The metaverse itself looks to be a massive, new online platform that'll allow users to create digital avatars, work from virtual offices with remote coworkers, and even use holographic versions of themselves to play games and hang out with friends. It also appears to be focused on creating detailed overlays over existing physical spaces.

The platform will also include a virtual version of Facebook Marketplace, where you'll be able to sell digital products and services.

"We have a new north star: to help bring the metaverse to life," he said. "And we have a new name that reflects the full breadth of what we do and the future we want to help build."

More on Meta: Is This Facebook's New Name?

Read This Next
Will Somebody Think of the Children?
Mom Horrified by What Her Kids Are Seeing in Roblox
Scammers Scam On
The Fyre Fest Guy Is Off House Arrest and of Course His New Scheme Involves the Metaverse and Crypto
Confrontation is Hard
Former Facebook Exec Says Zuckerberg Has Surrounded Himself With Sycophants
Virtual Signing
Sign Language in Virtual Reality Actually Looks Kinda Awesome
Zesus
Interesting Theory: Mark Zuckerberg Is Trying to Become God and Build Heaven
More on Future Society
Bird Crap
Feb 4 on the byte
It Looks Like Elon Musk Is Actually Building a Twitter Payment Platform
Balloon News
Feb 3 on futurism
China Says "Spy Balloon" Soaring Over America Is Completely Innocent
Down in Flames
Feb 1 on the byte
Elon Musk Apparently Thinks Twitter Is a "Flaming Dumpster Rolling Down the Street"
READ MORE STORIES ABOUT / Future Society
Keep up.
Subscribe to our daily newsletter to keep in touch with the subjects shaping our future.
+Social+Newsletter
TopicsAbout UsContact Us
Copyright ©, Camden Media Inc All Rights Reserved. See our User Agreement, Privacy Policy and Data Use Policy. The material on this site may not be reproduced, distributed, transmitted, cached or otherwise used, except with prior written permission of Futurism. Articles may contain affiliate links which enable us to share in the revenue of any purchases made.
Fonts by Typekit and Monotype.