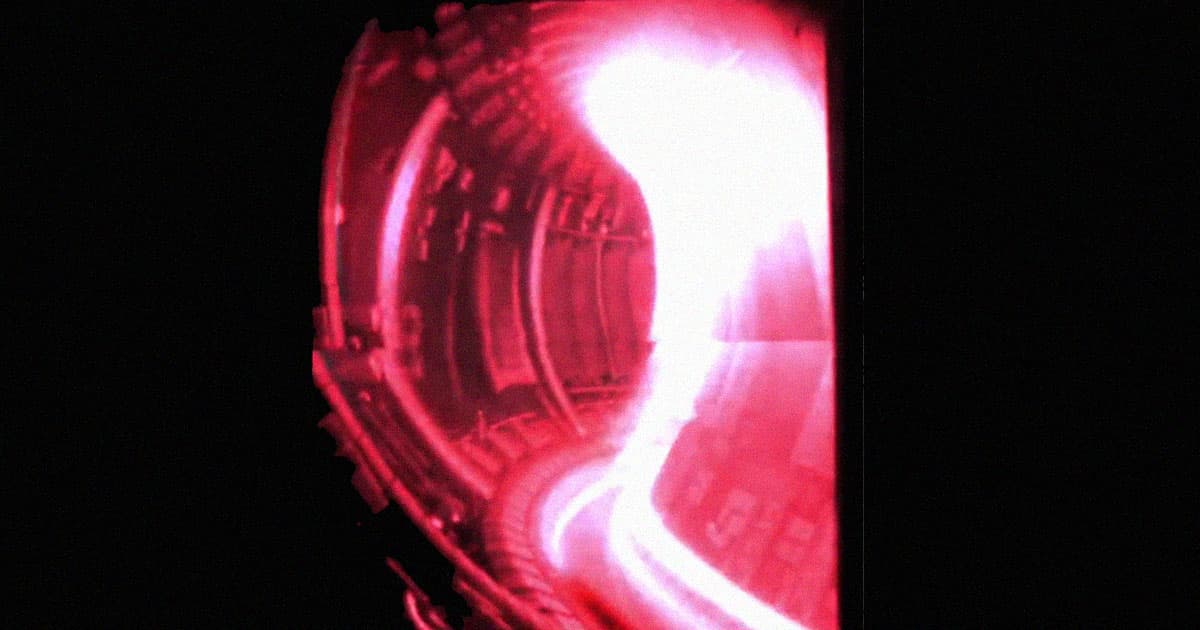 Fusion As It Happens

Scientists were excited to announce a major breakthrough in fusion energy research today.

The UK-based Joint European Torus (JET) lab smashed its own 25-year-old record, producing 59 megajoules of energy over five seconds, roughly the equivalent of 30 pounds of TNT.

And thanks to a camera mounted inside the reactor, now we get to watch an incredible display of glowing plasma whipping around the interior of the donut-shaped chamber.

Conditions inside the reactor are extreme to say the least, with temperatures reaching in excess of 100 million degrees Celsius, ten times the core of the Sun. The plasma glow is created by isotopes of deuterium and tritium fusing together to form helium, essentially the same process that powers stars like our Sun.

The goal of achieving fusion — a virtually limitless supply of truly green and safe energy — is likely still many years out. The reaction may have lasted for a record five seconds, but the amount of energy needed to get the reaction going still far exceeds the amount that was gained.

But that doesn’t mean this week’s breakthrough wasn’t a major step towards that goal.

“It is really, really impressive,” fusion physicist Josefine Proll at Eindhoven University of Technology in the Netherlands, who was not involved in the latest demo, told Nature, adding that five seconds is a “big deal.”

More on the record: Fusion Scientists Say They Just Made a Major Breakthrough

Smashing Nuclei
Fusion Scientists Say They Just Made a Major Breakthrough
Feb 9
Read More
Fusion Update
Chinese Scientists Say They’ve Discovered Cheap New Way to Do Nuclear Fusion
11. 12. 21
Read More
Reheat to Ignition
Scientists Are On the Edge of a Fusion Power Breakthrough
8. 18. 21
Read More
+Social+Newsletter
TopicsAbout UsContact Us
Copyright ©, Camden Media Inc All Rights Reserved. See our User Agreement, Privacy Policy and Data Use Policy. The material on this site may not be reproduced, distributed, transmitted, cached or otherwise used, except with prior written permission of Futurism. Fonts by Typekit and Monotype.