Fusion Scientists Say They Just Made a Major Breakthrough

"We've demonstrated that we can create a mini star inside of our machine and hold it..." 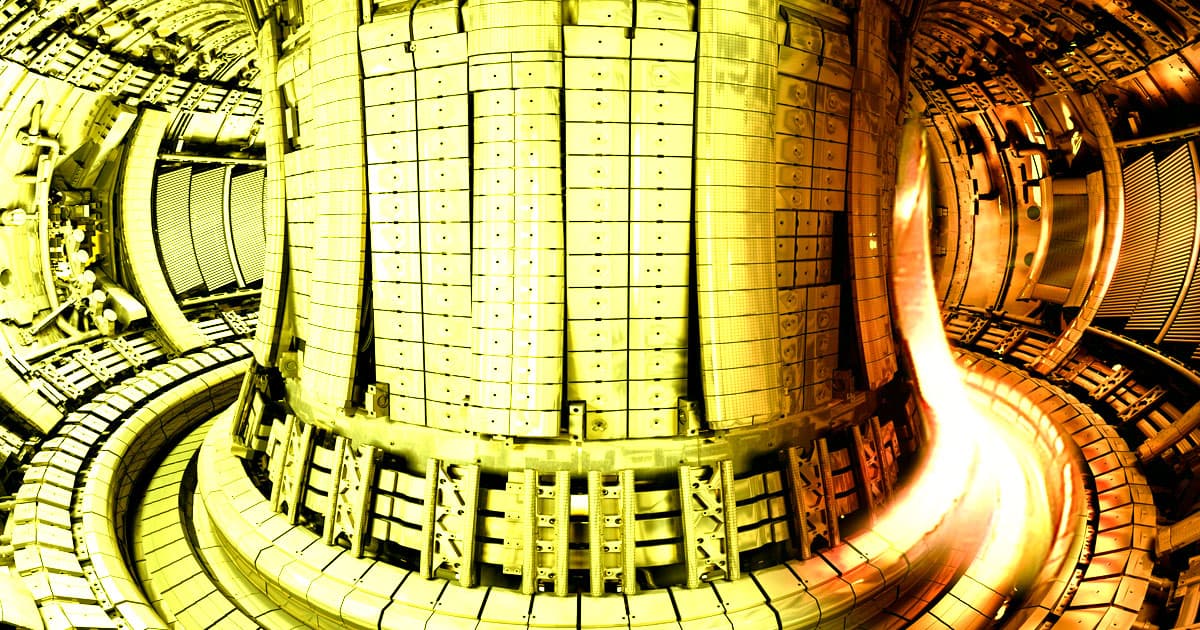 Scientists at the UK-based Joint European Torus (JET) lab have smashed a fusion energy record for the first time in 25 years, producing 59 megajoules of energy over five seconds, the BBC reports. That's 11 megawatts, enough to boil about 60 kettles worth of water, or the equivalent of 30 pounds of TNT.

The test more than doubles the previous record of just 21.7 megajoules, set in 1997 at the same facility.

The team behind the experiment say it's a major breakthrough, and one that inches closer to a green form of energy that doesn't run the risk of ending in a nuclear meltdown.

"The JET experiments put us a step closer to fusion power," Joe Milnes, the head of operations at JET, told the BBC. "We've demonstrated that we can create a mini star inside of our machine and hold it there for five seconds and get high performance, which really takes us into a new realm."

"These landmark results have taken us a huge step closer to conquering one of the biggest scientific and engineering challenges of them all," Ian Chapman, the chief executive of the UK Atomic Energy Authority, said in a statement. "It’s clear we must make significant changes to address the effects of climate change, and fusion offers so much potential."

The test involved heating up ionized gases to roughly ten times the temperature of the Sun's core. In these conditions, atomic nuclei fuse and release copious amounts of energy.

The difficult part is producing more energy than has to be put in to kickstart the reaction, which remains the holy grail of fusion energy. The JET facility achieved a Q value, the fusion power output relative to power, of just 0.33. A value of one would mean the facility produced as much energy as it used.

That may not sound awfully impressive in and of itself, but the fact that it sustained such a value over five seconds represents a major leap in the field. The 1997 record may have achieved a Q value of 0.7  — but it did so for less than 4 billionths of a second, as Nature points out.

"Five seconds doesn’t sound like much, but if you can burn it for five seconds, presumably you could keep it stable and keep it burning for many minutes, hours, or days, which is what you are going to need for a proper fusion power plant, Mark Wenman, nuclear materials research fellow at Imperial College London, told The Guardian.

"It’s the proof of that concept that they have achieved," he added.

The landmark experiment sets the stage for the much larger ITER, a multi-billion dollar fusion reactor being built in France. JET uses the same deuterium-tritium fuel mix that ITER will be using as well.

While it's a notable moment in the development of fusion energy, scientists still have a long way to go until we can use fusion reactors as a sustainable form of energy.

But, for now, it's important to celebrate a step in the right direction.

"We didn’t jump up and down and hug each other — we were at 2 metres distance — but it was very exciting," Fernanda Rimini, a plasma scientist at the Culham Centre for Fusion Energy (CCFE) where JET is based, told Nature.