It's "an engineering marvel beyond belief," a White House science adviser said. 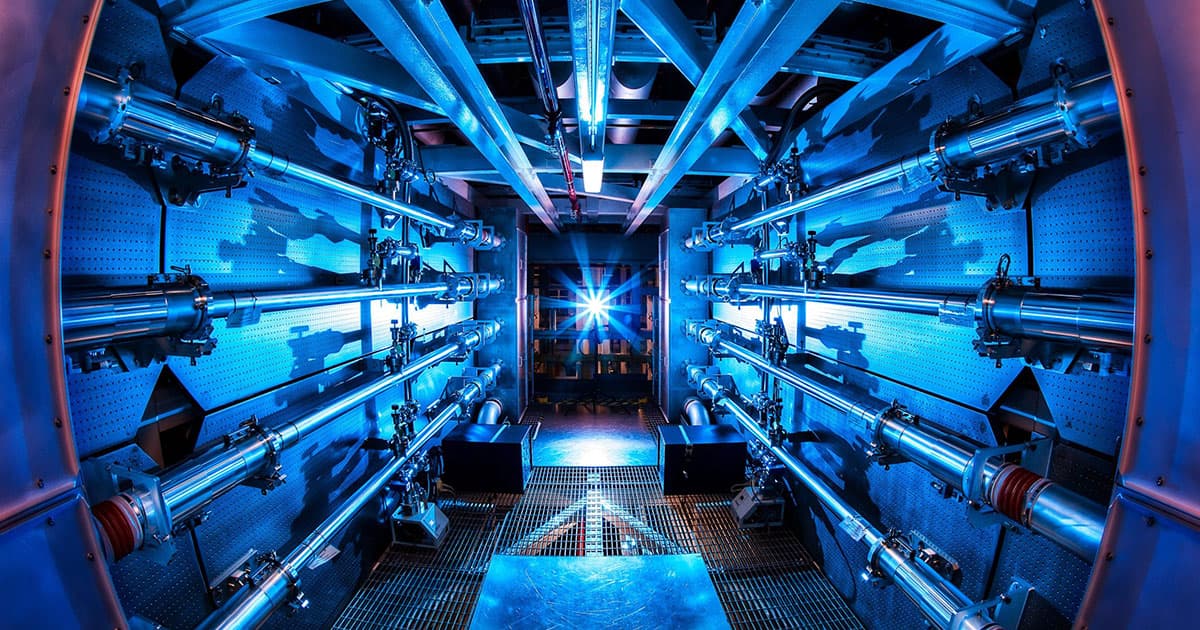 Researchers at the Lawrence Livermore National Laboratory claim to have achieved the seemingly impossible: generate more energy with a fusion reaction than they put into it, potentially paving the way for a truly environmentally friendly and safe source of power.

Their experiment, which involved using the "world's largest and highest energy laser system" at Livermore's National Ignition Facility to blast light at small capsules of deuterium-tritium fuel, generated 20 percent more energy than the amount required to power the system.

Despite the modest energy output — the system generated enough power to boil around two to three kettles — the researchers are boldly predicting that it could represent a major turning point in the quest to turn fusion energy into a reality.

"The fact that we were able to get more energy out than we put in provides an existence proof that this is possible," Mark Herrmann, program director for weapons physics and design at Livermore, told The New York Times. "It can be built on and improved upon and made better and could potentially be a source of energy in the future."

A net energy gain represents a milestone that has long been seen as the "holy grail" in fusion energy over its many quixotic decades.

Engineers have tested many different fusion reactor designs over the years, but always needed more energy to kickstart the process than they were able to get out of it — until now, the Livermore scientists say.

But there's still plenty of work left to do before we can start replacing coal, gas, and nuclear power plants.

For one, we still don't know if the technology can be feasibly scaled up to power an entire grid, researchers caution.

"To go from there to actually energy on the grid is a very long and difficult path," Riccardo Betti, chief scientist of the Laboratory for Laser Energetics at the University of Rochester, who was not involved in the experiments, told the NYT.

The promises of fusion power are vast: not only is it emissions-free, but it doesn't run the risk of causing a nuclear meltdown, either.

Despite the long road ahead, experts are seeing the latest experiment as an important step forward and a reason to be optimistic about the future of fusion energy.

"It took not just one generation but generations of people pursuing this goal," White House science adviser Arati Prabhakar said in a statement. "It's a scientific milestone."

"It’s also an engineering marvel beyond belief," he added.

Read This Next
Another Breakthrough
Fusion Scientists Claim Net Energy Gain, in Potentially Huge Breakthrough
Fusion Futility
Elon Musk Slams Fusion, Says Future of Energy Is Wind and Solar
Hurricane Season
Oops! Fusion Facility Keeps Failing to Recreate Last Year's "Breakthrough" Record
Smashing Atoms
Startup Says It's Honing in on Simple Solution for Practical Fusion Power
Smashing Nuclei
Fusion Scientists Say They Just Made a Major Breakthrough
More on Earth & Energy
Save Yourselves
Yesterday on the byte
Furious Marsupial So Thirsty For Sex That It’s Dying, Scientists Warn
Stem Ware
Feb 3 on the byte
Scientists Discover World's Oldest Preserved Vertebrate Brain
From Bad to Worse
Feb 2 on the byte
Global Warming Is Worse Than We Thought, AI Tells Scientists
READ MORE STORIES ABOUT / Earth & Energy
Keep up.
Subscribe to our daily newsletter to keep in touch with the subjects shaping our future.
+Social+Newsletter
TopicsAbout UsContact Us
Copyright ©, Camden Media Inc All Rights Reserved. See our User Agreement, Privacy Policy and Data Use Policy. The material on this site may not be reproduced, distributed, transmitted, cached or otherwise used, except with prior written permission of Futurism. Articles may contain affiliate links which enable us to share in the revenue of any purchases made.
Fonts by Typekit and Monotype.