To pull off fusion power, scientists are going to need exactly the right fuel. 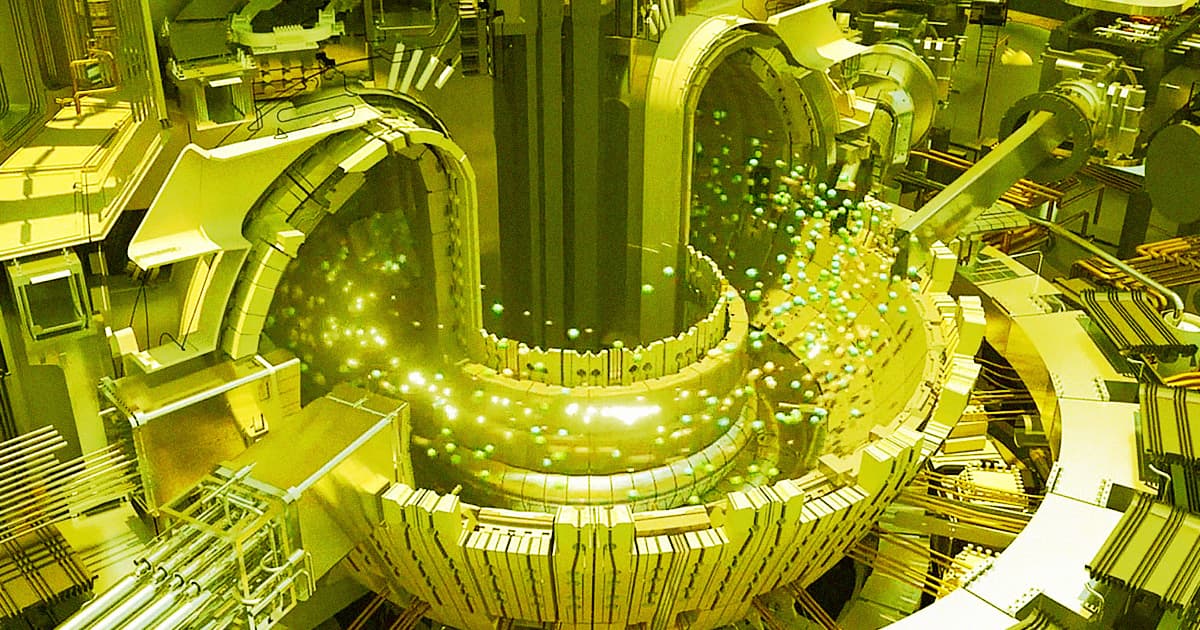 British engineers are preparing to test the fuel mix that could one day power the largest nuclear fusion experiment in the world, Nature reports.

Researchers at the Joint European Torus (JET), a fusion reactor at the Culham Centre for Fusion Energy in Oxfordshire, UK, began conducting fusion tests involving tritium, a radioactive isotope of hydrogen, back in December.

The tokamak, a commonly implemented donut-shaped reactor design, was converted into a one-tenth scale reactor of ITER, the world's largest planned nuclear fusion research project that began assembly in July 2020. ITER is set to start operations no sooner than 2025.

This summer, researchers at JET will begin experiments involving both tritium and deuterium, a different hydrogen isotope.

The concept is simple, with plasma of both isotopes combining in order to release heat. The heat is the result of helium being produced, bringing temperatures inside the reactor up to 100 million degrees, several times hotter than the Sun's core. This additional heat then sustains further fusion reactions, as Nature explains.

At least that's the theory. No fusion reactor has yet managed to produce more energy out of these cascading reactions than what it took to start them.

JET's initial goals aren't quite that ambitious as it gears up to find the right fuel mix for the much bigger version at ITER. The researchers are hoping to sustain reactions for at least five seconds to collect all the data they need about how tritium behaves.

"What we are after is physics information that we can use to validate our understanding, and then we can apply that to preparing the future machine," Joelle Mailloux, co-lead of the experiment at JET, told Nature.

Making matters even more complicated is the fact that bombarding neutrons created by the mixing of tritium and deuterium will make the inner facility quite radioactive. So radioactive, in fact, that humans won't be able to safely step foot inside for at least 18 months. That means it will have to work the first time.

For now, fusion energy remains an extremely elusive form of generating power. While there is considerably more weight behind efforts to make it a reality than there just ten years ago, on the small startup and international scale alike, practical fusion power has yet to materialize.

But once realized, it could represent an entirely new form of virtually limitless energy — minus the risk of a nuclear meltdown.

Read This Next
Net Gain
Physicists Say New Breakthrough Proves Fusion Power Is Possible
Another Breakthrough
Fusion Scientists Claim Net Energy Gain, in Potentially Huge Breakthrough
Fusion Futility
Elon Musk Slams Fusion, Says Future of Energy Is Wind and Solar
Hurricane Season
Oops! Fusion Facility Keeps Failing to Recreate Last Year's "Breakthrough" Record
Smashing Atoms
Startup Says It's Honing in on Simple Solution for Practical Fusion Power
More on Earth & Energy
Stem Ware
Friday on the byte
Scientists Discover World's Oldest Preserved Vertebrate Brain
From Bad to Worse
Thursday on the byte
Global Warming Is Worse Than We Thought, AI Tells Scientists
RIP Fred
Thursday on the byte
Instead of Predicting Length of Winter, Groundhog Simply Dies
READ MORE STORIES ABOUT / Earth & Energy
Keep up.
Subscribe to our daily newsletter to keep in touch with the subjects shaping our future.
+Social+Newsletter
TopicsAbout UsContact Us
Copyright ©, Camden Media Inc All Rights Reserved. See our User Agreement, Privacy Policy and Data Use Policy. The material on this site may not be reproduced, distributed, transmitted, cached or otherwise used, except with prior written permission of Futurism. Articles may contain affiliate links which enable us to share in the revenue of any purchases made.
Fonts by Typekit and Monotype.