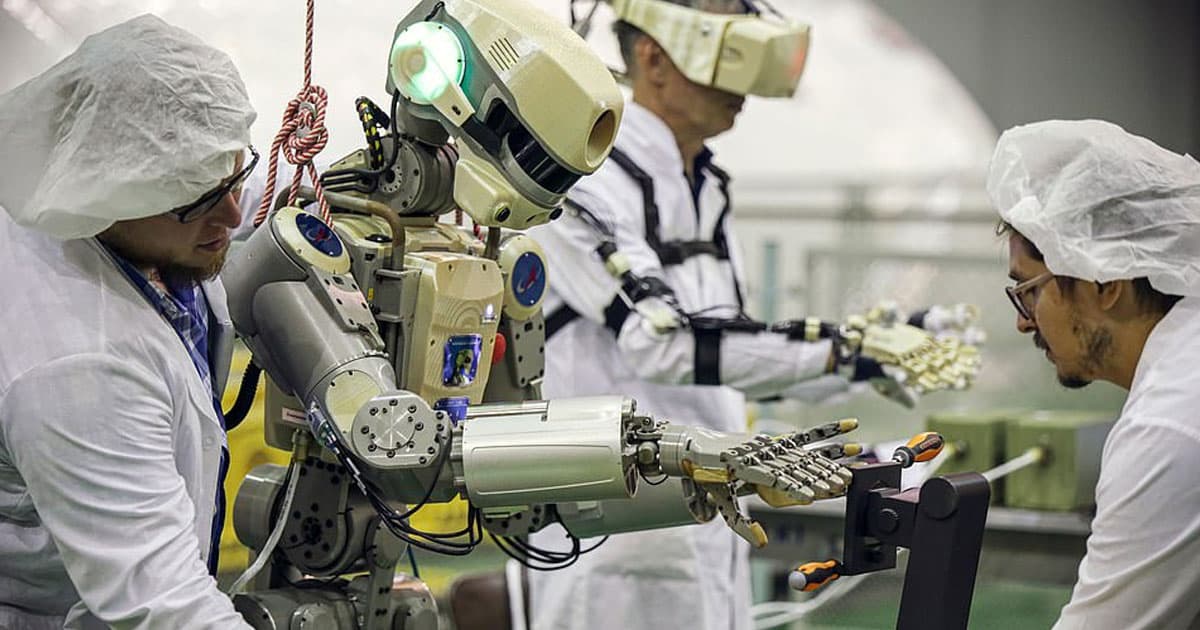 Russia's Gun-Shooting Robot Is Heading to the Space Station

The Russian space agency, Roscosmos, just unveiled test footage of a semi-autonomous robot named Fedor that will be sent up to the International Space Station next Thursday.

The robot, which was previously shown aiming and firing guns in a 2017 video, is expected to help Russia develop and construct future bases and settlements on the Moon or other planets, according to Daily Mail. If its stint in space goes well, the humanoid robot could help pave the way for humans to settle the cosmos.

Fedor is capable of handling some specific tasks autonomously, but a human operator back on Earth will help it along the way. The robot is programmed to mimic the movements of a human wearing a sort of exoskeleton-turned-remote control.

But left to its own devices, Fedor can target and grab objects, right itself when it falls over, and, in the above video, pass the time by doing some push-ups — it remains to be seen which of those skills will be most useful in outer space.

More on space settlements: Elon Musk: Mars City Could Cost up to $10 Trillion

FROM THE DEPT. OF THINGS TO BUY
Best Telescopes of 2023
7. 31. 22
Read More
FROM THE DEPT. OF THINGS TO BUY
Best Space Games of 2023
3. 9. 22
Read More
Diner Drama
People Furious at Robot Serving Pancakes at Denny's
11. 28. 21
Read More
+Social+Newsletter
TopicsAbout UsContact Us
Copyright ©, Camden Media Inc All Rights Reserved. See our User Agreement, Privacy Policy and Data Use Policy. The material on this site may not be reproduced, distributed, transmitted, cached or otherwise used, except with prior written permission of Futurism. Articles may contain affiliate links which enable us to share in the revenue of any purchases made.
Fonts by Typekit and Monotype.