IBM is Teaching Robots How to Communicate like Humans 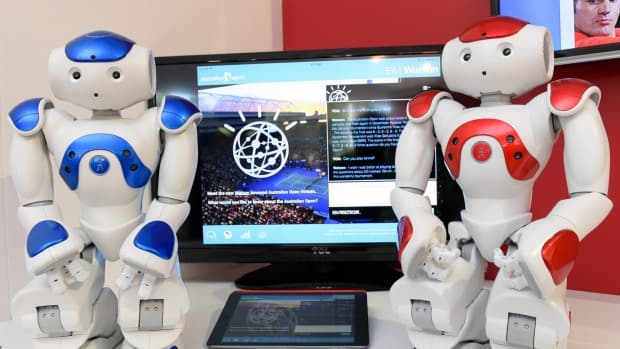 Communication is a lot more than just speech. It involves tone, hand gestures, eye contact, body language, and a number of similar processes. Unfortunately, because there are so many factors, it is hard to create robots that are able to truly mimic humans. But now, IBM has applied its learnings from Watson (a tech platform that unites natural language processing and machine learning to make patterns from large amounts of unstructured data) to improve robots' understanding of human communication.

The team used video footage to help associate certain actions with phrases, and then applied this knowledge to the creation of a small humanoid robot. Robert High, of IBM Watson, demonstrated their techniques during their keynote speech at the recently concluded RoboBusiness conference.

Although the project is still in its early stages, it may dramatically increase the number of potential uses for robots. As the years pass, more and more environments will have humans and robots working together, and the improved forms of communication could be used in everything from customer service to personal assistants.  However, the team has a lot more work to do before their tech can be incorporated into daily use. For example, they need to figure out how the robot's algorithms can filter out background sounds in noisy environments.

Read This Next
Brands We Love
Take a Deep Dive into AI with this $35 Training Bundle
Human-like Learning
IBM's New AI Does Something Amazing: It Learns From "Memories"
Fitness Tracker
New Pentagon Tech Unlocks Smartphone Based on Your Gait
Debate Team
IBM's New AI System Can Compose Logical Arguments
Futurism
Qbits for Cubists: Robots Made These Incredible Works of Fine Art
More on Artificial Intelligence
Sing Me a Song
7:49 PM on the byte
Google Officially Announces ChatGPT Competitor Called "Bard"
Hmmmmmmmm
7:16 PM on the byte
Head of ChatGPT Admits She Had Concerns About Releasing It Publicly
Judge Dredd
3:34 PM on the byte
Judge Uses ChatGPT to Issue Ruling in Court Case
READ MORE STORIES ABOUT / Artificial Intelligence
Keep up.
Subscribe to our daily newsletter to keep in touch with the subjects shaping our future.
+Social+Newsletter
TopicsAbout UsContact Us
Copyright ©, Camden Media Inc All Rights Reserved. See our User Agreement, Privacy Policy and Data Use Policy. The material on this site may not be reproduced, distributed, transmitted, cached or otherwise used, except with prior written permission of Futurism. Articles may contain affiliate links which enable us to share in the revenue of any purchases made.
Fonts by Typekit and Monotype.