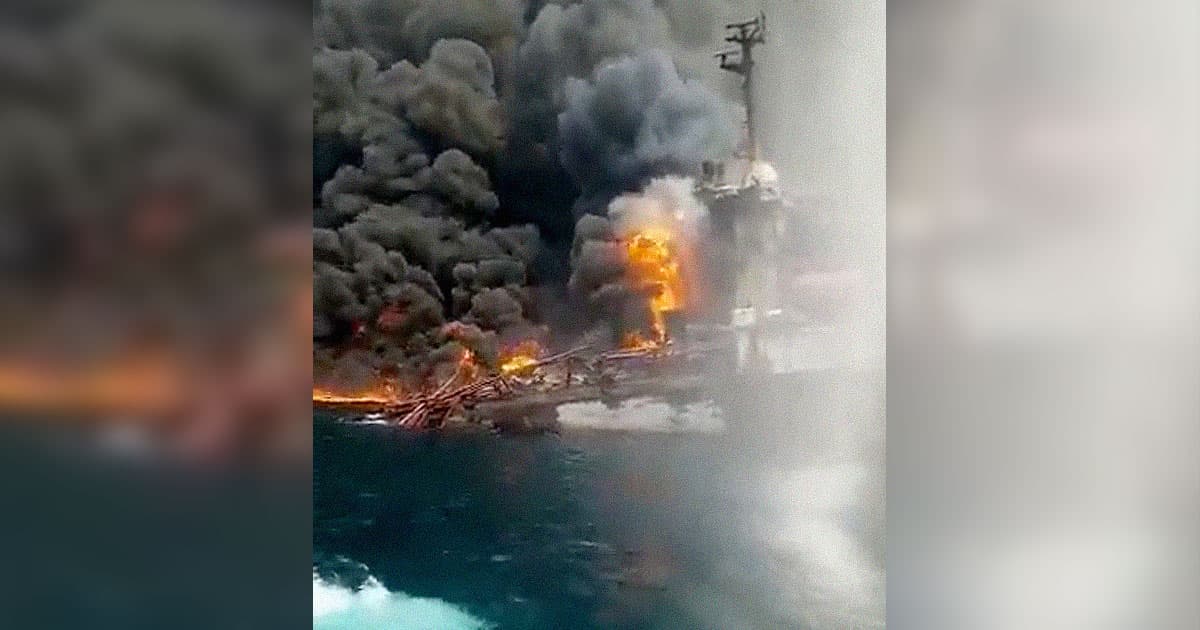 An environmental disaster in the making.

An environmental disaster in the making.

An oil production and storage ship exploded off the Nigerian coast on Wednesday morning, Reuters reports. The condition of the ten crew members on board is still unclear, as well as how much of the vessel’s two million barrel capacity of oil was on board at the time of the catastrophe.

It’s yet another oil vessel disaster that will likely result in huge amounts of toxic oil being released into the ocean, a stark reminder of our continued reliance on fossil fuels and the very real risks involved in its production.

Videos emerged on social media reportedly showing the aftermath of the explosion, with a massive dark cloud of billowing smoke emanating from the sinking ship.

But given previous disasters, the risk of an environmental disaster is pretty high.

“From the environment angle, we are putting in efforts to prevent damage beyond the current burning of the contents,” Idris Musa, director general of Nigeria’s National Oil Spill Detection and Response Agency, told Bloomberg.

“We got information of the fire incident yesterday and we immediately ordered our field officers to commence investigation,” Gbenga Komolafe, CEO of the Nigerian Upstream Petroleum Regulatory Commission (NUPRC), told Reuters. “Investigations are still ongoing.”

The vessel was being leased by Shebah Exploration & Production, which, according to the country’s state-owned records, had not been producing oil in 2020 or 2021, Bloomberg reports. The NUPRC also announced in mid-2019 that it had revoked the producer’s license.

Europe Is Illegally Shipping Its Used Electronics to Nigeria
4. 23. 18
Read More
An Engineer Has Accidentally Discovered a Way to Make Transporting Oil Safer
9. 7. 17
Read More
Go Phish
The Most Famous NFT Artist Got Hacked, Ripping Off His Followers
Yesterday
Read More
+Social+Newsletter
TopicsAbout UsContact Us
Copyright ©, Camden Media Inc All Rights Reserved. See our User Agreement, Privacy Policy and Data Use Policy. The material on this site may not be reproduced, distributed, transmitted, cached or otherwise used, except with prior written permission of Futurism. Fonts by Typekit and Monotype.